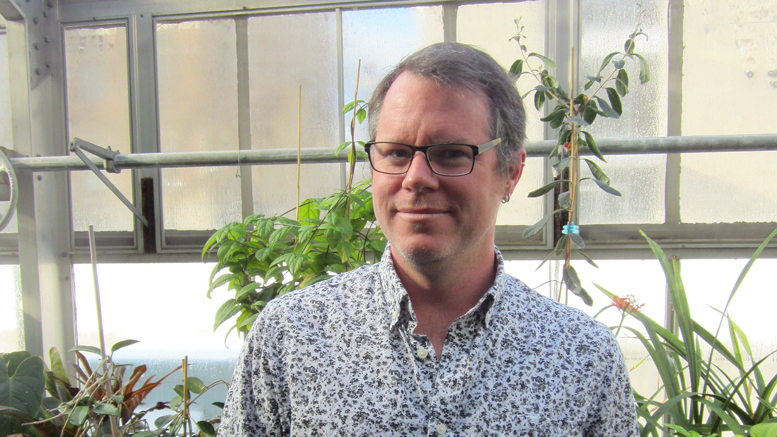 Members of the plant kingdom make hundreds of thousands of molecules called secondary metabolites. These compounds aren’t crucial for life, but are instead used for things like communication and defense – think of the poisons found in hemlock, which was used to kill Socrates, or capsaicin, which is found in chili peppers to deter herbivorous mammals.

Jake Stout, an assistant professor in the department of biological sciences, is interested in plant metabolites, especially those with medicinal potential.

“Collectively, you could say that plants are better chemists than us,” Stout told the Manitoban.

These medicinal compounds are often produced within specialized plant cells through a conveyer belt of enzymes called a biosynthetic pathway. A gene in the plant’s DNA encodes each of these enzymes.

Stout uses a genomic technique called transcriptome sequencing, which takes snapshots of the genes that are being used in plant tissue at particular moments in time.

Genes only work through intermediate messenger molecules. Transcriptome sequencing allows Stout to see what messages are being used where, and what those messages say.

From the information gathered using this technique, specific genes of interest can be singled out to answer questions like “what step along the pathway is this?” and “what goes in and comes out?”

“In doing that with a whole bunch of genes, we can reconstitute the entire biosynthetic pathway that a particular plant uses to make those compounds,” said Stout.

By understanding these pathways, biochemists stand a better chance of synthesizing these compounds in the lab.

A main subject of research in the Stout lab is the African shrub Tabernanthe iboga, which produces the psychedelic drug ibogaine.

Ibogaine isn’t commonly used recreationally – it has unpleasant effects and induces a rapid heartbeat – but it does show medical potential in the treatment of addictions.

“There is anecdotal evidence that ibogaine is able to partially reset the neurochemical pathways associated with addiction in the brains of people with dire opiate addictions,” said Stout. “They say that they don’t have withdrawal symptoms for weeks.”

Stout is also interested in the evolutionary history that resulted in the formation of medicinal compounds.

Information about ibogaine synthesis would lend itself to understanding the synthesis of other compounds as well.

“Ibogaine belongs to this whole class of compounds called monoterpene indole alkaloids,” said Stout. “They tend to be really complicated molecules, so we’re not very good at making them.”

Amongst this class of compounds are the chemotherapy drugs vinblastine and vincristine, which are isolated from the Madagascar periwinkle.

“In India and Madagascar, companies grow thousands of acres of these periwinkles to extract vinblastine and vincristine,” said Stout. “The Madagascar periwinkle only makes these compounds in at around 0.01 per cent by weight, which is just a whiff.”

In contrast to the periwinkle, iboga produces ibogaine in its roots at about four per cent by weight.

If Stout were able to stop the biosynthetic pathway of ibogaine right after catharanthine, he would be able to produce the vinblastine precursor in iboga at yields much higher than the finished product in periwinkles.

“I’m coming up with devious ways to make the other half of vinblastine,” said Stout.

Perfecting this would lower the price of the anti-cancer drug, increase its accessibility, and open up land for agricultural use.

Using this information, Stout hopes to sample other plants in the iboga family for genes involved in the production of different monoterpene indole alkaloids.

“We could potentially produce a whole bunch of these molecules in the iboga system,” said Stout.

For his PhD, Stout studied the production of lignin, a polymer responsible for the rigidity of plants like trees.

“In looking at the way that biosynthesis works, I started looking at structurally related compounds,” said Stout. “Mescaline has almost the exact same structural pattern as some of the lignin monomers.”

Mescaline is a psychedelic drug found in the peyote cactus – it’s what Owen Wilson’s character was high on in The Royal Tenenbaums.

“I think that mescaline biosynthesis might be the entire lignin biosynthetic pathway just moved over a step,” said Stout. “From an evolutionary standpoint, it would be like an entire pathway being co-opted, rather than just bits and pieces.”

“Plant-produced psychedelic compounds are really interesting because they’ve been used for thousands of years by different cultures for medicinal and ritualistic purposes. Knowing how these compounds are produced adds to that indigenous knowledge, and will allow us to produce other medicinal compounds such as vinblastine at reduced cost,” Stout told the Manitoban when asked about what it’s like working with drugs commonly known for their hallucinogenic effects.

“Besides, it’s kind of awesome to work on plants that are illegal in a lot of the world because it cuts down on competition.”

More information about Jake Stout and his research can be found at http://umanitoba.ca/Biology/people/stoutjm/

The search for extraterrestrial life