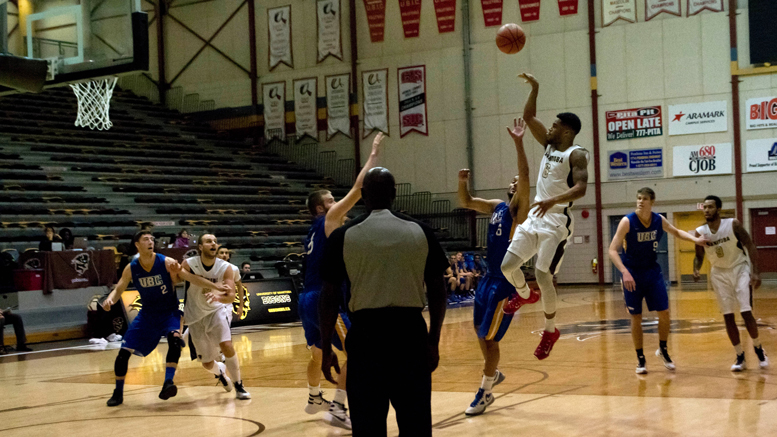 The University of Manitoba Bisons men’s basketball team made a historic run in 2015-16, culminating in the team’s first-ever appearance at the Canada West Final Four. Below are the top 10 moments, plays, and memories from the season.

Osahon Eghosa – an Ontario native who last played for Colorado Northwestern – was recruited in the offseason by head coach Kirby Schepp as one of the key pieces at the four or five position for the future. While he didn’t see much action this past year, the big-body forward did offer a sneak peek at what he has to offer against both Brandon and Trinity Western.

It’s fairly safe to say that centre Brett Jewell was hot and cold in 2015-16. There were times where he dominated in the paint and others where he was borderline nonexistent. One thing is for sure though: when his fellow big-man Wyatt Anders was out of the lineup, he made a huge impact. The best example occurred against Regina in the second game of their back-to-back where Jewell notched 12 points, six rebounds, and four assists. He did most of his damage in the first half but it was enough to secure momentum for the herd, which they never gave up en route to a 77-63 victory.

The Bisons entered the last series of the season having already known that they had made the playoffs. What was at stake though was the chance to host an opening round matchup. The herd was taking on a lowly Trinity team that was at the bottom of the standings but Trinity came out hot against Manitoba in game one, entering halftime with a 36-31 lead.

The herd responded after recess, putting up 35 points in both the third and fourth quarters to steal the win and also guaranteeing themselves a minimum third place finish in the standings in the process. Overall, 10 different Manitoba players scored in what resulted in a 101-67 victory.

During Coach Schepp’s time at the U of M, the Bisons have established an up-tempo identity offensively – frequently using their speed and cardio to capitalize on fast-break opportunities. This was especially evident with the number of powerful dunks that Manitoba showcased in 2015-16, with Justus Alleyn, Keith Omoerah, Jonathan Alexander, Brett Jewell, and Osahon Eghosa all getting in on the jam-fest.

Omoerah’s windmill dunk against Winnipeg in the Wesmen Classic was impressive, but it’s Alleyn’s one-hander in a losing effort against UBC that takes the cake. Trailing in the fourth quarter, Alleyn took matters into his own hands, going coast-to-coast and showcasing his hops by posterizing two Thunderbirds forwards – both of whom had a minimum of four inches on the Bisons guard.

Keith Omoerah was a critical piece to the herd’s success all season long. After taking a few seasons off to deal with personal matters, he returned in 2015-16 and didn’t miss a beat. Omoerah started every game, rotating anywhere from the one to four position and his hard work culminated in a Canada West Second-Team All Star selection.

One of his more memorable performances occurred during a Friday night game in late January against the Regina Cougars, where he finished with 16 points, 14 boards, and six assists. Manitoba would go on to win the contest 89-82.

The Bisons didn’t fare quite how they wanted against Calgary in the Canada West Final 4, but earlier in the year – in the third game of the season – Manitoba gained the upper hand with a 96-90 overtime win. Wyatt Anders was the star of the show inside the paint, recording a career-high 20 boards in 34 minutes of play. While he didn’t have stellar offensive numbers on the night, his ability to reset the shot clock for his team was invaluable. Stellar guards Justus Alleyn and AJ Basi were the biggest beneficiaries, as Alleyn finished with 27 points while Basi had 16.

After falling in the opening game of the second half of the season against Victoria on the Friday night, Manitoba was looking for revenge and a critical two points in the rematch. They obtained their goal – a 65-59 win – thanks to a dominating performance defensively where Wyatt Anders, Keith Omoerah, Malik Irwin, and Jonathan Alexander all had at least one block.

Manitoba started off the 2015-16 season in memorable fashion, coming from behind in the final minute to upend the Saskatchewan Huskies 91-88. AJ Basi was the hero of the evening, as he hit two straight shots from beyond the perimeter in the final 43 seconds. The first tied the game at 88, while the second was a fadeaway corner three that occurred with only one second left.

The herd had plenty of reason to celebrate during non-conference play, as they ran through their competition during the three-day Wesmen Classic tournament which occurred over the winter break at the University of Winnipeg. The Bisons got past Lethbridge in the quarterfinals and Winnipeg in the semis, before handing Lakehead a 73-54 drubbing in the championship game to claim their first tournament win since 1991.

Manitoba received contributions from all five starters, as well as Malik Irwin, Ilarion Bonhomme II, Jonathan Alexander, and Amir Ali off the bench.

Manitoba’s third-place finish in the standings earned them their first home playoff series since the 2003-04 season and they didn’t disappoint, sweeping the Fraser Valley Cascades in two games. The resounding quarterfinal win was also a monkey off their back in terms of the herd’s ability to win on their home court during the post-season.

Wyatt Anders returned from injury and had a major impact on the glass, while the herd used their reserve depth to stymie a Cascades team that didn’t have much production aside from their starting five. While the Bisons’ playoff run came to a close a week later, the quarterfinal win was still a massive step forward for the program.