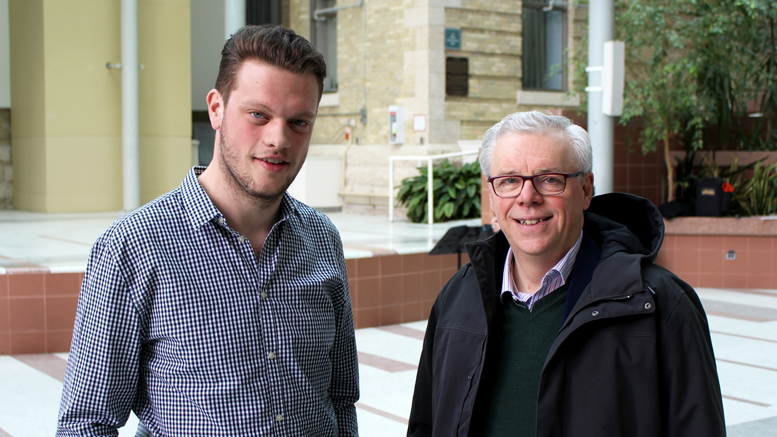 If re-elected April 19, the Manitoba NDP will offer non-repayable grants in place of student loans and provide free tuition to students in foster care up to age 25, leader Greg Selinger announced at an on-campus press conference Monday.

“We want to make sure people not only have hope but a practical path to a better life and we all know that education is still the single best way to prepare yourself for the future,” Selinger said in an interview with the Manitoban.

Selinger said converting student loans to grants builds on the NDP’s history of support for post-secondary education, which includes annual funding increases, caps on tuition increases, and most recently the elimination of interest on student loans.

“Because of all these other supports we put in place it was the next logical move to build on that experience and try and keep post-secondary affordable for Manitobans who go to school here,” Selinger said.

The grants are set to cost $40 million a year, compared to over $33 million a year for the current slate of student aid programs. The cost has been taken into account in the NDP’s budgeting forecasts, Selinger told the Manitoban.

Grant amounts will be determined by the same criteria currently used for loans, and students who are currently receiving loans will still have to pay them back – though any future provincial student aid those same students receive will come in the form of grants.

At the conference, Selinger also announced several more plans for post-secondary funding, including doubling funding for the Manitoba Scholarship and Bursary Initiative from $4.5 million to $9 million, launching a pilot program to prepare adult learners for post-secondary education or apprenticeships, and introducing $12 million for student family housing at Brandon University.

Michael Barkman, chairperson of the Canadian Federation of Students-Manitoba, welcomed the announcement.

“It’s something that students have been asking for for a long time from all political parties,” he said.

Barkman compared the NDP’s promise to the student aid programs in Newfoundland, where the Progressive Conservative government replaced student loans with grants last summer, and Ontario, which recently announced an initiative to provide non-repayable student aid to students from families earning less than $50,000 a year.

“It’s an exciting step forward and it’s something we’re seeing across the country a lot of political parties committing to,” Barkman said.

Allison Kilgour, a U of M student and a senate representative for the Arts Student Body Council, also praised the NDP’s student aid proposal.

“We’ve seen the student debt rising higher and higher and we’ve seen other provinces take steps towards lowering the debt and turning it into grants,” said Kilgour.

“From a large university perspective, a lot of students have to work full-time just to pay for their education, or can’t even attend university based on their income or what they can and can’t afford.”

The Liberals promised in November to take the $10 million of Manitoba Student Aid money devoted to loans and convert it to non-repayable grants. They also vowed to eliminate the cap on how much money students can earn from working while in school.

NDP Education Minister James Allum criticized the Liberal plan in November, saying “if you pull the string on [Liberal leader Rana Bokhari’s] particular commitment, then some of [the current government’s student aid package] is going to collapse and suddenly we’ll have a system that’s not working for students but in fact working against them.”

The Manitoba Progressive Conservatives, who are the frontrunners in provincial election polls, have not yet committed to a student aid plan, though they have cited their planned cut to the provincial sales tax as a way of putting money in the pockets of students and their parents.

The PCs have criticized student aid initiatives brought forward by the NDP and the Liberals. In a Q&A with the Manitoban March 8, Tory education critic Wayne Ewasko said that the interest-free student loans introduced by the NDP government last year are “something […] we’re going to be having conversations about once we get in.”

He also criticized the Liberal plan in a November interview, saying he doubts they will be able to follow through.

“It sounds like a great promise but to me it’s sounding unrealistic and to me it sounds as if [Bokhari is] doing some vote-buying,” he said.

Barkman compared the NDP’s proposal favourably to the Liberals’.

“The Liberal promise is an eventual conversion to grants with only $10 million of funding per year, whereas the NDP is an immediate conversion of loans into grants,” he said. “So [the NDP promise is] essentially the same, similar to what we have been proposing for a number of years, whereas the Liberals’ is kind of a slower way to get there.”

Barkman said he is awaiting announcements on student aid from the remaining provincial parties.

“I’m hoping that other parties, particularly the PCs, will be committing to tangible solutions to reduce the debt load that students face as well as making post-secondary more accessible for all learners.”

UMFA, U of M extend mediation