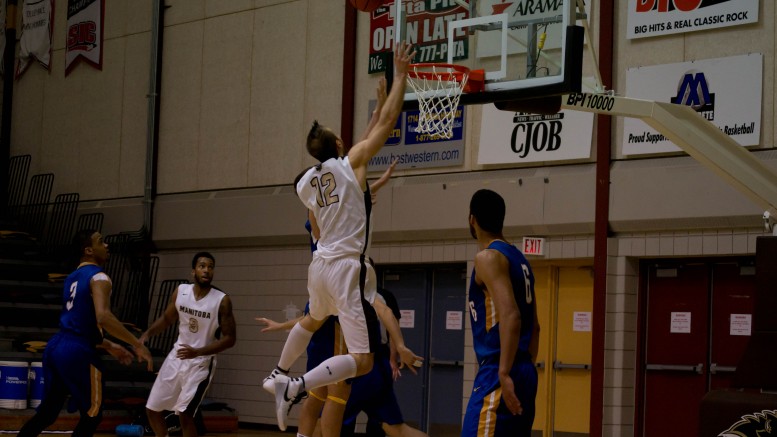 The University of Manitoba Bisons men’s basketball program entered playoff action this past weekend in slightly unfamiliar territory – as they’d never been to a Canada West Final Four in program history. In order to move on to nationals, Manitoba needed to knock off top-ranked Calgary this past Friday night – the team that was hosting the Final Four. Unfortunately, the herd was outmatched by a squad with far more depth off the bench and a hometown crowd that had an impact.

The loss, coupled with a Thompson Rivers victory over the CIS nationals hosting UBC Thunderbirds earlier that same evening, meant that the Bisons’ chances of making it to the big dance were officially eliminated by the end of day one.

The Bisons opened up an early 14-4 lead in the first quarter against the home squad, only to see the prehistorics get hot from three-point range and close the opening 10 minutes on a 21-6 run. The 25-20 score after the opening quarter was as close as Manitoba would get from then on, as the Dinos used a strong shooting performance to cruise to a 100-74 win.

Calgary went 8-of-18 overall from the perimeter, led by reserve guard Jhony Verrone, who scored nine of his 11 points from the three-point range. Fellow guards Jasdeep Gill and Torrez McKoy also made an impact off the bench, contributing 11 and nine points respectively. As a whole, the Dinos had 42 points off the bench, compared to just 18 for Manitoba as Ilarion Bonhomme II and Jonathan Alexander were both negated for the most part, netting just nine combined points.

The visitors did have three players in double figures in scoring, with Justus Alleyn, Brett Jewell, and AJ Basi recording 11, 12, and 17 points individually. Unfortunately for Manitoba, there wasn’t enough consistency as all three players did most of their damage in the first half.

Calgary, on the other hand, was led by starting guards Thomas Cooper and David Kapinga, who scored 27 and 23 points respectively and were unstoppable for most of the night. Kapinga was the biggest X-factor, as he didn’t play when the two teams met earlier on in the season. His scoring touch mixed with his strong defensive play were both invaluable this time around.

The herd was also cold from the free throw line, shooting just 58.3 per cent from the charity stripe. This was a critical factor in the first quarter specifically, where Manitoba got to the line 13 times, but for the most part were unsuccessful attaining the single points.

With a shot at nationals eliminated, Manitoba entered Saturday’s game against the T-Birds with a slightly different mindset, knowing that the only thing left to play for was a Canada West bronze medal. Head coach Kirby Schepp spread out his bench, as 10 different players saw at least 10 minutes of game action. The season came to a close on a losing note though, as UBC rode a 30-point first quarter to come out with the 101-72 win.

Versatile forward Conor Morgan was the MVP for UBC, netting a game-high 28 points on 7-of-8 shooting from three-point range, while the Bisons’ leading scorer was Keith Omoerah with 13.

Despite the unfortunate end to the season, Manitoba can be happy knowing they accomplished something no other men’s basketball team has done for the herd since entering Canada West play – make it to the Final Four. With the majority of the team returning for 2016-17, the Bisons will likely be right in the mix yet again.