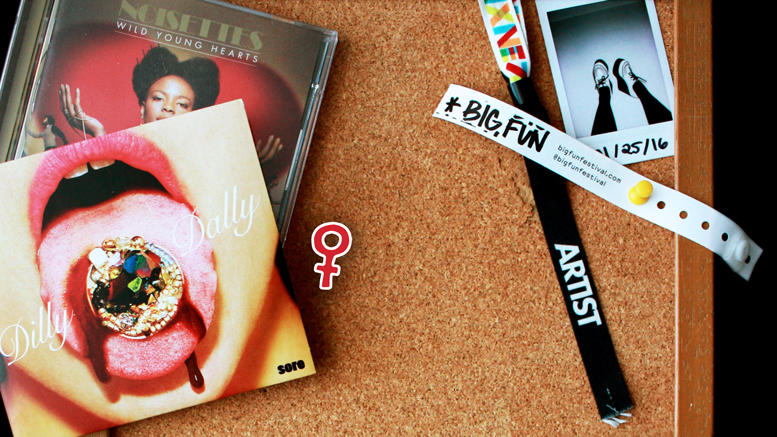 As a female musician, I often feel as though I have to work twice as hard to be taken half as seriously in the music scene.

Men have also approached me after performances to comment on my clothing and appearance. I remember being cornered by two men after playing a show in Toronto, who looked me up and down and told me that my shorts were “really short,” and that “there are other ways of getting attention.”

Performing onstage as a woman means that I have to be simultaneously attractive to the crowd, yet not so attractive as to invite unwanted attention.

Many people also don’t seem to understand how two womyn could possibly be in a band together; either you’re the exception to the rule, “one of the guys,” or you must be in an “all-girl band,” which is code for “a band nobody takes seriously.”

Being one of two womyn in a band also leads people to compare us, and refer to us by contrasting us to one another. I was once presented not as a keyboardist nor as a back-up singer, but as “the one with dark hair” by an event organizer who was introducing the band to the crowd. These comments don’t seem harmful until you consider why they are being made, and whether or not they would be made about a male musician. Are my male colleagues asked if they are “the only boy in their band?” Are they introduced to the crowd according to their physical appearance or by their role in the band?

All this said, I am still incredibly privileged. I am a white, thin, able-bodied, upper-middle-class woman. The indie genre is dominated by musicians who look like me. Seeing and hearing female musicians growing up as an angsty pre-teen encouraged me to dive into music and maybe even see myself in it. I like to think that 11-year-old me – with my choker necklace, camo pants, and skateboard – would be psyched to see that she’d end up playing in a band as an adult.

With these playlists, I hope to celebrate womyn in music who have surely dealt with their share of misogyny, racism, and homophobia but are creating amazing music despite these obstacles. Womyn from Beyoncé, who specifically hires female musicians and producers as part of her team, to Grimes, who not only composed and performed the material on her latest album, but also produced it herself. Here’s a small taste of nostalgia, undeniable big names, and up-and-coming womyn in the indie sphere that have caught my eye.

Carolyne Kroeker is the keyboardist/backup vocalist for Sc Mira.