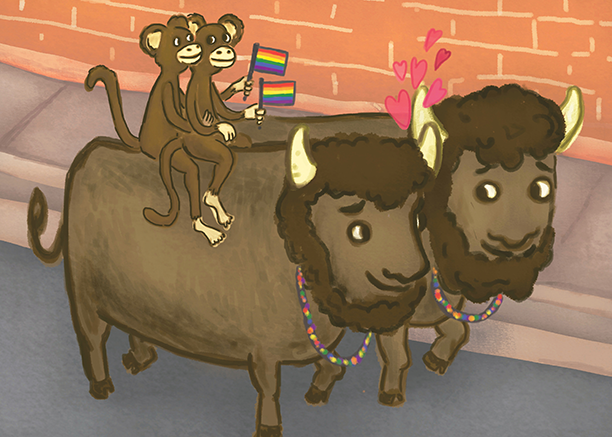 Throughout the animal kingdom, non-heterosexual sex is a common thing. Whether in the air, on land, or in the sea, animals don’t seem to have any problem with getting it on with members of the same sex.

At least 1,500 animal species have been documented having homosexual sex. Often, the behaviour is influenced by external factors like creating and maintaining social order, a lack of mates of the opposite sex, and for simple sexual release.

As it turns out, almost all animals that have homosexual sex do not do so exclusively. All of these animals could be labelled as bisexual.

Female warthogs have been observed to form long-lasting pair bonds with each other – even going as far as raising piglets together. If one of the pigs is unable to carry out its parenting duties, the other will take on more responsibility until the other is fit to help out again.

The majority of laysan albatrosses on the Hawaiian island of Oahu are female. About 10 years ago, researchers found that almost a third of all pair bonds were between two female birds. Researchers believe that laysan albatrosses form female-female pairings because of the dearth of males on the island.

Pair-bonded female albatrosses will nest with each other, and can last as long as male-female pairings, often for life. Paired females will also rear chicks together. A male in a male-female relationship will often sneak away to mate with either, or even both, of the paired females.

Bottlenose dolphins use same-sex intercourse as a way of strengthening social bonds; dolphins have very intimate relationships, regardless of the sex of the individuals. Both female and male dolphins have been found messing around with members of the same sex before going on to find a mate of the opposite sex later on in life.

When female dolphins get it on, it happens through something called “beak-genital propulsion,” which is exactly what it sounds like.

Homosexual sex amongst female macaques is extremely common – female-female pairings are typically very short, lasting around a week, but that doesn’t stop them from mounting each other hundreds of times. These pairings are entirely based on seeking sexual pleasure, and as such, females will still encourage male mating as well.

Japanese macaques are quite famous because of the Jigokudani Monkey Park in the Nagano Prefecture of Japan. During the winter, the macaques will come down from the cliffs that surround the park and relax in the hot springs until evening, when they return to their homes in the forest.

Penguins are by far the most publicized group of animals that have homosexual sex. Two popular penguins – Roy and Silo – at New York’s Central Park Zoo successfully raised a chick together from an egg that they were given. Before they were given their own egg, the penguins were found trying to steal eggs from male-female couples.

The penguins remained paired for six years before a new female stole the interest of Silo. Life is hard.

Domestic sheep are the one exception to this laundry list of animals that can be called bisexual. Up to 10 per cent of male rams will form pair bonds exclusively with another male. These rams do not mate, but act as lifelong companions in all other aspects of sheep life.

Some rams are bisexual, however; about 20 per cent of rams display sexual behaviour towards both sexes.

These bulls are real trailblazers putting the bi- in bison.

2017 promises to be a big year for Canadian science