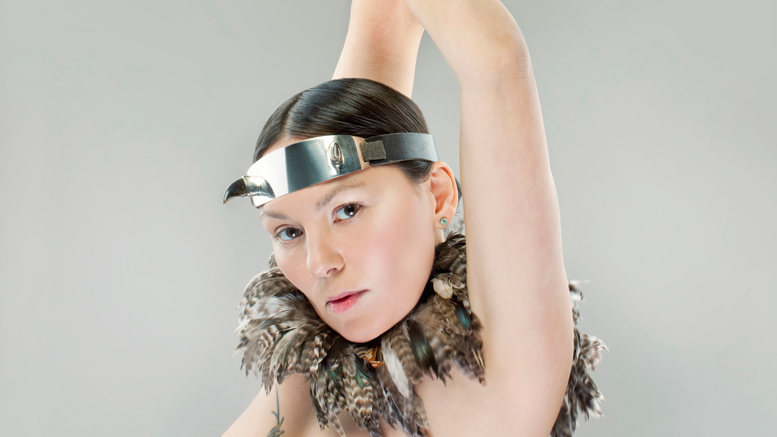 A prolific artist, Tagaq is a songwriter, filmmaker, and painter. Her most recent album, Animism, garnered numerous awards, including a 2015 Juno award and the 2014 Polaris Prize.

The lecture, titled “Arctic Origins: Perspective through Art,” discussed Tagaq’s personal experiences, her creative process, and how her art is shaped by her Canadian Arctic background.

She began by playing a seven-minute short film called Tungijuq and talked about growing up in Nunavut.

Tagaq spoke about the forced relocation of her mother to Resolute Bay, Nunavut, and its negative effects on her family. Forced relocations were common to many Inuit families and communities as the Canadian government sought to establish sovereignty in the high Arctic.

“This is colonialism at its most violent,” he said. “Only in recent years has there been a revival, especially of throat singing and to some extent drum dancing.”

Tagaq, an Inuk woman, is known for her activism against the racism and sexism that indigenous women continue to face in Canada.

Last year’s locally infamous Maclean’s magazine article – “Welcome to Winnipeg: Where Canada’s racism problem is at its worst” – cited a Twitter comment Tagaq posted after being followed and sexually harassed by a man while walking to lunch in downtown Winnipeg.

During the lecture, she displayed a list of missing and murdered indigenous women to highlight how life in Canada continues to be unsafe for women like herself and reminded the audience of their collective responsibility to change the statistics.

She finished her presentation with a song.

“She speaks out of her own life experience and she connects the colonial dots for us,” Trott said. “The talk did both of those things for us, but when she sang at the end – and sang from somewhere deep down in her soul – it all connected at a level beyond the intellect and in the gut, at least for me.”

The lecture was held as part of U of M’s Indigenous Awareness Week, which featured panels on integrating treaty perspectives into school curriculum and discussions surrounding indigenous credit requirements at the post-secondary level.

“I really enjoyed how genuine, how honest, how truthful she actually was,” said Leanne Deanne, an undergraduate student.

Carl Stone, an advisor at the Indigenous Student Centre, expresses a similar sentiment.

“To be able to speak as frankly as she did, I loved that.”