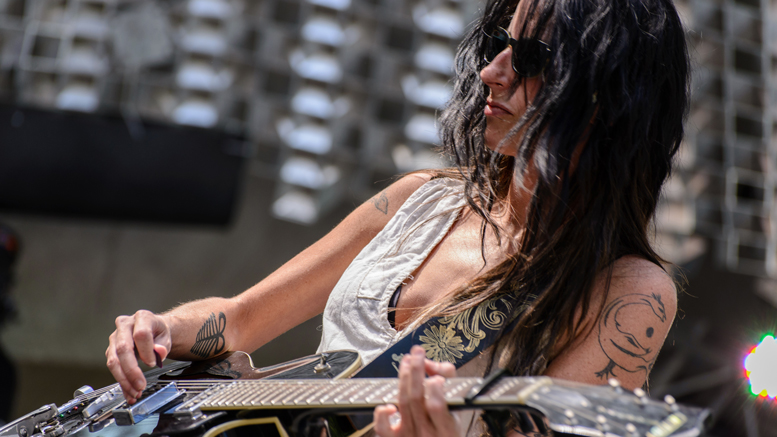 On Friday, Feb. 5th, local roots/rock n’ roll musician Romi Mayes will be releasing her sixth and latest album Devil on Both Shoulders on vinyl at the Park Theatre.

The vinyl release of Devil on Both Shoulders is taking place about eight months after the album’s initial release on CD.

“I had always planned to put it out on vinyl, but it just took a while to put the time and money and focus into making that a reality,” said Mayes.

“Grant Siemens’ production on the album will transfer perfectly to vinyl. I think the album was made to be heard that way.”

Music critics across the country have praised Devil on Both Shoulders as being a bluesy take on Mayes’ typical roots/rock n’ roll style.

Mayes makes a living as a full-time musician, touring often and treating her hometown audience in Winnipeg to frequent shows.

“The only way to be a full-time musician is to play full time. You definitely need to find the balance of home life and touring life, but I think you need both to sustain a living.”

With fingers crossed on a Juno nomination, Mayes will be touring throughout Canada and the United States, strumming through Saskatchewan and Alberta to join in the Juno celebrations followed by a trip south of the border to the central and southern states.

While on the road, Mayes tries to maintain her creativity in support of creating music in the future.

“I’m always doing a little writing here and there, but it’s usually after a couple years and about 10 to 15 solid songs that I feel ready to think about another album,” Mayes explained.

Mayes stays so busy with touring, press, and creating music, that thinking about a new album is a goal that’s not at the front of her mind.

“It’s good to let an album play out until you’re antsy and ready with enough energy to give another one its fair commitment,” said Mayes.

“Until then, if you are lucky enough, you just ride the coattails of your most recent recording as long as it allows you to.”

Doors for Romi Mayes’ vinyl release open at 8:00 p.m., with music at 9:00 p.m. Tickets are $12 in advance and can be purchased online via www.ticketfly.com or in person at the Park Theatre or Music Trader.