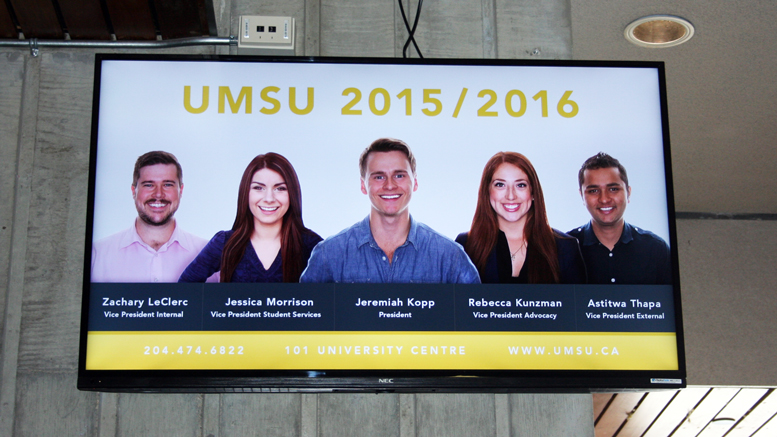 During councillor reports at the Jan. 28 UMSU council meeting, Isaac Weldon, vice-president of the ASBC and proxy for an absent councillor, outlined two motions recently approved by the arts council.

The first stated that the process used to approve a $64 UMSU fee increase did not include proper consultation or debate among councillors and students. The second condemned Kopp for comments made about ASBC councillor Reanna Blair at the Dec. 3 UMSU council meeting, and requested that he apologize. Blair, along with one other UMSU councillor, had voted against the motion to increase fees.

Kopp did not apologize for the content of his comments – which alleged racism on Blair’s part – but rather stated that it was poor form for him to bring up a personal meeting with an UMSU councillor.

“This issue is in regards to a conversation that took place between myself and an UMSU councillor that I felt was fair game in the context of an UMSU council meeting,” Kopp told the Manitoban. “However, the manner in which I approached it was not considerate, and for that I am sorry.”

“That is not to say that I retract the content.”

Kopp added that he will be reaching out to the U of M human rights office and to Blair in order to seek mediation, arguing that he believes there is a significant difference between poor form and a hostile work environment.

He also told the Manitoban that he will be consulting with the chair of UMSU council about the possibility of having a representative of the human rights office present at future council meetings.

UMSU council approved a $64 increase in its yearly fee on Nov. 19 without going to a referendum. In addition to meeting with councillors, the UMSU executive consulted with about 2,500 students through an online survey in advance of tabling the motion.

At the Dec. 3 UMSU council meeting, Blair reported discussions at the ASBC about the hasty time line and lack of consultations associated with the motion. These concerns were echoed by several other councillors in their reports.

“We didn’t hear any overwhelming concern regarding the ideology behind the motion. Our council members seemed to support the nature of the initiative. However, the consensus was that […] the timeline wasn’t adequate in order for us to discuss it with our council,” Blair said during the meeting.

“Our fellow council members were unaware that the motion was even on the table, and one council member actually asked to bring forth the message, and this I quote, that he felt ‘disrespected by the process’ just given how little time was given for us to discuss it.”

Kopp responded to these comments by criticizing Blair directly later in the meeting.

“I’m not putting a huge amount of stock in [Blair’s report] because you were very opposed to the motion and I know for a fact that the arts council was very split in terms of their discussions around this,” he said, addressing Blair.

“I know in our personal consultation on it, you had indicated some issues with the indigenous category specifically, so for that one I’m not putting a whole lot of stock behind that.”

After an exchange where Blair expressed concerns about the fact that Kopp was not taking her report into consideration, he responded with an allegation of racism against the councillor, which she strongly denied. $5 million worth of the new UMSU money is slated to be dedicated to scholarships and bursaries for indigenous students.

Blair told the Manitoban that Kopp’s characterization of their consultation meeting is fabricated, adding that the UMSU president has facilitated a hostile work environment where councillors are afraid to oppose executive decisions and motions.

“I was publicly humiliated in front of so many other UMSU councillors,” she said, adding that the ASBC motions sought to repair the damage of that humiliation.

“We wanted to bring it forward and really repair some of the harm that was done by Jeremiah’s […] remarks, so that’s really why we brought it forward in that context.”

Weldon repeated these concerns, stating that the motions were meant to reiterate and make official what Blair had reported to council on Dec. 3.

For her part, Blair said she is confident that she made the right decision by voting against the $64 fee increase.

“I believe that UMSU’s role should be as a lobby group on campus […] as opposed to doing the jobs that the administration should, in my opinion, be doing,” she said, adding that there was also simply not enough time to give the motion proper consideration.

“Instead of charging more I think we should be trying to get administration to do more.”