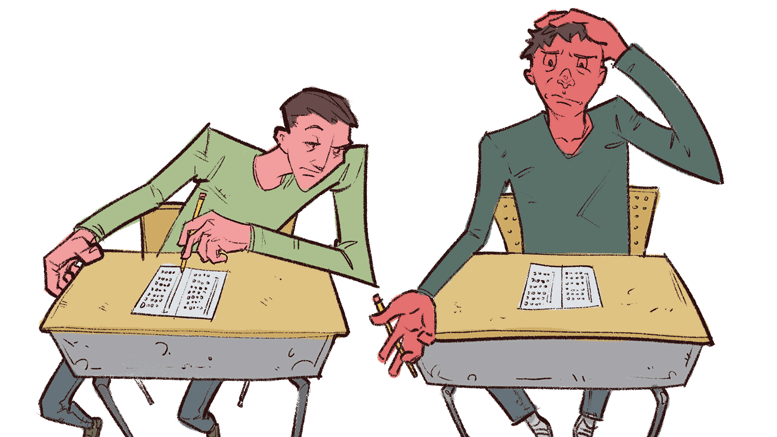 Academic dishonesty has been a recent point of focus for the Manitoban. In particular, the articles “Academic dishonesty on the rise” (Feb 10) and “The declining value of our degrees” (Feb 24) provide some commentary on the jump in reported incidents – up 785 in 2014-15 from 559 in 2013-14. Certainly, this is an important issue worthy of discussion.

However, I am not happy with the way those articles present the issue. Allow me to explain why.

I am not debating the problem’s existence. Having sunk a good amount of time into analyzing University Discipline Committee (UDC) reports as part of my tenure with the academic integrity working group (AIWG), I have several hours’ worth of frustrating proof of just how difficult it is to make any methodological sense of why some offenses are classified as inappropriate collaboration, or as plagiarism. Sometimes you find the same offense in both categories.

But let’s bracket all of those troubles for now, and agree that there is an issue with what Jordyn Lerner calls “ridiculous” amounts of dishonesty. What I take issue with is the way that the problem of “academic dishonesty” is represented, both in this publication and beyond. There are two primary concerns I have with respect to discourse surrounding academic dishonesty.

The first is the implicit assumption that academic dishonesty happens because of lazy, morally bankrupt students. Lerner laments that the numbers in the UDC report “[make] us all look bad”. This isn’t wrong, but after reading it one gets the sense that there are a bunch of filthy cheaters and thieves among us. I would argue that this isn’t a productive way of discussing the problem.

Rather, I would argue that the term academic dishonesty is problematic itself. What this term does is group together several disparate behaviours – everything from buying a paper on the internet to accidentally forgetting an in-text citation – under the banner of immorality.

As a tutor with the Academic Learning Centre (ALC) for three years, I have witnessed several writing blunders by bright, hard-working students. By far the most common blunder is called “patchwriting.” Patchwriting occurs when a student struggles to understand complicated texts, and tries to paraphrase them – but because they have difficulty understanding the text, retain most of the original sentence structure, changing a few words here and there.

Even if they cite the original source, our institutional setup will formally identify this as plagiarism. This is because plagiarism considers not only an author’s original ideas as their intellectual property, but also their expression of those ideas; their “voice” as an author.

Fair enough. A university is only as good as the production and circulation of its intellectual capital and scholarly reputation, and so it needs to jealously guard both. But at the same time, are patchwriting students dishonest or morally bankrupt? Certainly not the countless ones that I’ve helped at the ALC, regardless of whether or not they were meeting with me because they were “caught” plagiarizing.

The point here is that we learn by doing in academia, for all the time we spend with our noses in books. This means that you have patchwritten, too. Yes, you. This is because it is a natural step on the way to becoming an effective writer, not the mark of moral bankruptcy. Hell, I’m a PhD student, and I still patchwrite in my own notes if I’m skimming a text or in a rush. I’ve seen professors do it, too.

The difference is that they’ve been writing long enough to know when their voice differs enough from the original author’s. First-year students, often fresh out of high school, have not. Many international students, often facing imposing and intimidating language barriers, have not.

This brings me to my second, related issue – how to best address the problem.

The aforementioned articles don’t do much by way of suggesting specific student-tailored strategies, with the exception of Lerner’s suggestion of “[getting] tough on cheaters” and an UMSU executive’s sunny (albeit naive) optimism of a “fun and interactive” tutorial to teach academic integrity policy to undergraduate students.

The issue, of course, is that teaching students about policy and cranking up punishments do not make students better writers, or better learners. Further, the majority of students don’t see themselves as dishonest cheaters, so why should they care about something so boring as policy and punishments?

Let me say at this point that I’m not trying to sugarcoat anything. Are some students who cheat unaware of the rules, or want to bypass the system? Of course. Punishment and awareness are parts of a wider solution. But the lion’s share of those 785 breaches (just over 60 per cent) are inappropriate collaboration or plagiarism.

All of the UDC’s offence categories, but especially these, require a potpourri of responses. Both developmental and punitive approaches are needed. Punishment and awareness are not going to help the patchwriting student. Nor will they help the student too unfamiliar with their own psychology to study efficiently and smartly for an exam. They also won’t help the same student who, in a moment of frustration, despair, and panic, looks at someone else’s answer sheet in the middle of an exam.

Second-year criminological theory tells us that ramping up punishments doesn’t deter crime. What helps transition someone from the temptations of crime to a law-abiding lifestyle is long-term support in developing social and technical skills. Developing meaningful relationships with others and finding steady, fulfilling employment gives someone a stake in the system. It gives them a reason to care.

So, instead of making students better policy analysts, let’s make them better students. A recently piloted program on campus, Cite Right, is linking more novice writers with tutors who can help them find their voice instead of hushing it with the discourse of dishonesty.

Cite Right is an alternative or supplement “punishment” for students who are found “guilty” of “dishonesty.” Such students meet with a tutor for four or five writing modules, each lasting about an hour. Paraphrasing, developing a voice, and reading and writing strategies are all addressed.

This is a multifaceted approach coordinated by the ALC, Student Advocacy Office, the U of M libraries, and other departments on campus. Each office has an important role to play precisely because the problem does not, and cannot, only require one kind of perspective or approach.

This is the kind of good work being done on campus to address a complex problem. It is the kind of work that needs financial, administrative, and student support. If dishonesty is increasingly as rapidly as the UDC report suggests, band-aid solutions just won’t do.

All of this is to say that we should be a bit skeptical the next time the rhetorical alarms are sounded. Certainly, academic dishonesty needs our attention, but it doesn’t need our animosity. It needs our care, not our resentment.

Many students, requiring both attention and care, meet with tutors that are able to give them both. I’m of the opinion that every student at some point will need – and should be met with – both. As an institution, I hope that the U of M, with student affairs, can continue taking positive, co-operative steps to make that happen.