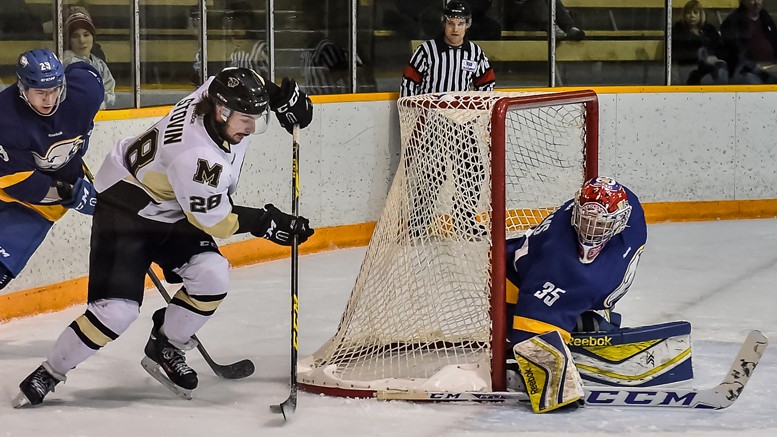 Stony Mountain is a small community 16 kilometres north of Winnipeg with a population of approximately 1,700 people. It’s home to NHL Hall of Famer Babe Pratt – a six-foot-three defenseman who applied his trade in the NHL in the 1930s and 40s. Stony Mountain is also where 21-year-old Canada West rookie phenom Brett Stovin honed his gifts as a hockey player.

Despite his young age, Stovin has the experience of a seasoned veteran. He played the better part of five years in the WHL for the Saskatoon Blades as well as eight games of pro hockey with the Missouri Mavericks of the ECHL. In a short stint with the club, he racked up five goals and one assist.

Stovin has also been a leader. He was relied upon as captain of the Blades in the final year of his WHL career. Being a leader is something that transcends the jersey you’re wearing and Stovin has stepped up to become one of the leaders on a young Bison squad.

“I’m taking on a bit of a leadership role as much as I can, and some of the guys are talking to me on the ice about different plays now,” Stovin said.

In a second-half matchup against the Alberta Golden Bears, with the score tied late in the third, Bison head coach Mike Sirant called a timeout prior to a power play. Stovin took the coach’s role and explained what everyone should be doing on the upcoming draw. Funny enough, the Bisons ended up scoring a late winner, yet another example of Stovin’s eye for the game and high hockey IQ.

Stovin’s smooth skating and uncanny finishing ability has him sitting near the top of the rookie scoring race in the Canada West conference with nine goals and 11 assists. He’s also coming off an 11-game point streak.

“The hardest thing about playing in the CIS is not playing all week, whereas in junior you play 72 games where there are some pretty tough stretches,” Stovin said when asked about the difference between the WHL and CIS.

“The guys are bigger and stronger, guys have more experience and it is a bit faster. You have to think the game differently.”

Stovin had plenty of other offers to go elsewhere, but because he had spent so much time away from home playing for the Blades, he decided to move back close to home and get his education at the University of Manitoba. Stovin said that Sirant was a big reason for his decision to come back home as well.

“This is where my family is from, and getting to spend time with family is important,” Stovin said. “Mike was really approachable and really honest throughout the process which I really liked.”

Sirant commended Stovin for his performance with the herd so far this season, discussing how he’s become one of the go-to players for the Bisons.

“Brett’s been amazing for us, he has contributed in so many ways,” Sirant said. “On the ice you can see that he’s consistently one of our best players and he plays well on both sides of the puck.”

As a natural bonus, Stovin has also provided Manitoba with some much-needed confidence as a team.

“He just gets it, he knows how to handle himself with his teammates,” Sirant said. “He provides really good leadership, he’s positive and encouraging and says the right things at the right time.”

Treading in the right direction