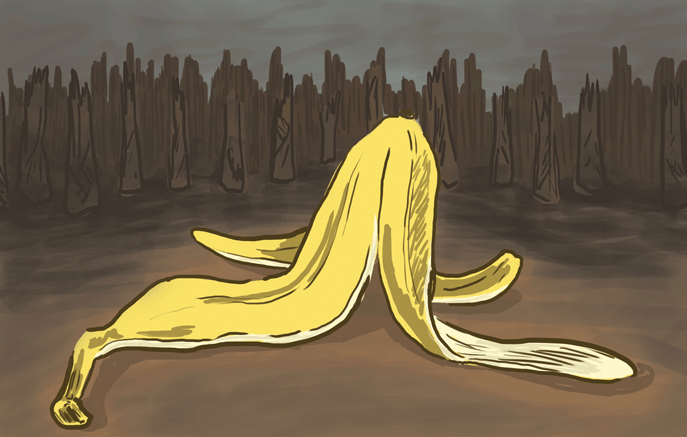 The ubiquitous Cavendish banana is on its last leg due to the fungal pathogen Fusarium oxysporum. The fungus causes a condition called Panama disease and threatens to wipe out commercial banana plantations across the world.

This story has happened once before. We are simply experiencing the second wave of bananageddon.

A recent report in PLOS Pathogens affirms the idea that the Cavendish banana is doomed if current commercial banana practices don’t change. In fact, this same story will be repeated over and over again until bananas are produced in a fundamentally different way.

Prior to the 1960s, a different banana was enjoyed around the world. The Gros Michel, a better banana than the Cavendish by all accounts in terms of flavor and robustness, was nearly wiped out by a different strain of Panama disease that first arose in Australia in the late 1800s.

The Gros Michel is still grown in some niche areas around the world, but Panama disease will ensure that it is never grown as a commercial crop again.

The Big Mike, as some like to call it, is larger, hardier, and more delicious than the plebeian Cavendish bananas we consume today. There is a reason that banana-flavoured foods don’t really taste like what we know of bananas – it’s because they taste like Gros Michel bananas, not our pathetic Cavendish.

The Cavendish arose from the ashes of the Gros Michel for one simple reason: it was immune to the strain of Panama disease that crippled the Big Mike.

However, even the Cavendish isn’t immune to this new strain of Panama disease, called Tropical Race 4, which was first noted in Southeast Asia and has since spread to Africa, the Middle East, and Australia.

There have been fears for more than a decade that Tropical Race 4 would cause the second bananapocalypse, and now that the disease has migrated to South America, which is where the world’s largest producer of bananas are, doom is close at hand.

But why is this happening to bananas?

Bananas are the prime target for disease-causing fungi because of the way they are cultivated.

If you go to the grocery store, you may notice that all bananas look the same; the consistency is almost too perfect. This is because all commercial bananas are clones of each other.

Bananas are commercially grown from cuttings of pre-existing plants. This mode of reproduction is asexual, which results in no genetic diversity amongst the population. This mode of cultivation is also why the bananas we eat lack seeds, since seeds form as a result of sexual reproduction.

Selling a cloned product is beneficial for a number of reasons. All banana fingers – each banana is a finger and the bundles are called hands – are remarkably consistent because of the cloning process. Cloning also allows for bananas to be produced en masse for cheap. Consistency and cheap production are desirable traits for any industry.

But without genetic diversity, there is little protection against disease. If a pathogen, such as Tropical Race 4, can wipe out one banana plant, it is able to wipe them all out.

While the loss of the Cavendish banana would be unpleasant for most of us here in Canada, it wouldn’t fundamentally change our lives.

The thing that makes Tropical Race 4 really scary is how it will affect the millions of people living in developing countries who rely on the fruit as a large source of their daily calories. The loss of the Cavendish would certainly result in food insecurity for these people.

In 2005, Dan Koeppel, the author of Banana: The Fate of the Fruit That Changed the World, wrote about the inevitable reckoning of Tropical Strain 4 for Popular Science.

“How much time is left for the Cavendish? Some scientists say five years; some say 10.”

The bananas have lasted 10 years, but will they last much longer?