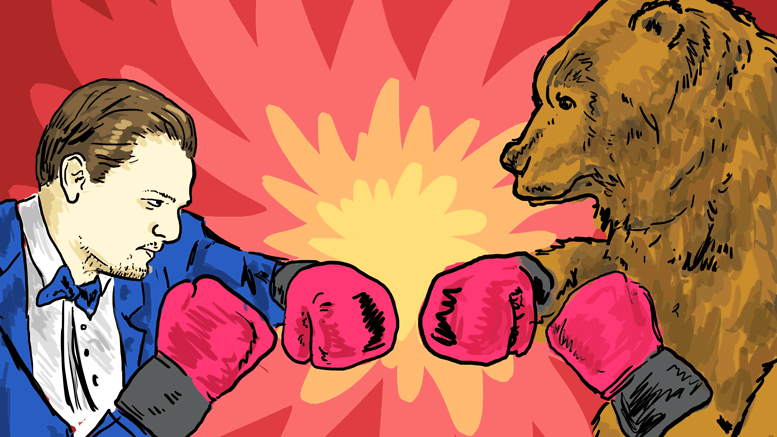 Months before The Revenant was released, stories were flooding in from set reporting the difficulty of the shoot, with one crewmember even referring to the production as “living hell.”

Filmed over a nine month period in remote areas of Canada and Argentina, the film was shot using only natural lighting. This meant that only a few shooting hours were available each day, putting enormous pressure on the cast and crew. Many workers quit, and others were fired. So, did these outrageous exertions from the cast and crew translate onto the screen? Undoubtedly.

The Revenant is loosely based on the true story of Hugh Glass (portrayed by Leonardo DiCaprio), a member of a fur trading expedition travelling through unsettled American wilderness in 1823.

This is about all the audience learns before being thrown head-first into the action, when the expedition is attacked by members of the indigenous Arikara tribe. We follow Glass and his son Hawk (Forrest Goodluck), Captain Andrew Henry (an always solid, though underwritten Domhnall Gleeson), and the rest of the team as they fight to escape.

It’s a powerful scene, with arrows startlingly taking down frontiersmen at any given moment. The camera whips through the action as if the audience is truly a part of the battle. The cinematography has a breakneck pace and with impeccable precision.

Emmanuel Lubezki is the master cinematographer of the film, teaming up for the second time with director Alejandro González Iñárritu (both claimed Oscar glory last year with Birdman).

Lubezki keeps the camera close to the characters at all times, immersing the audience in the film. Both Iñárritu’s direction and Lubezki’s camera work are best showcased after the Arikara attack, when Glass is mauled by a grizzly bear, who attacks not once, not twice, but three times before Glass finally takes it down.

It is a remarkably terrifying and visceral experience, hearing Glass’s bones break under the bear’s weight as he is clawed within an inch of his life. The scene is executed expertly, and the highlight of the film.

Tom Hardy performs wonders as John Fitzgerald, the antagonist and fellow frontiersman to Glass, who leaves him for dead after the bear attack. Hardy does a terrific job of finding the humanity in the villain but despite his terrific performance, the film belongs to DiCaprio.

Barely clinging to life after the attack, the rest of the film focuses on Glass pushing past every obstacle that comes his way to seek revenge on Fitzgerald.

DiCaprio threw himself into the role of Glass like he never has before. He learned to speak two indigenous languages (Pawnee and Arikara), and even eats a slab of raw bison liver for the film.

In a film where realism is everything, DiCaprio rises to the challenge magnificently. The depth DiCaprio can exude is remarkable in an almost entirely physical performance. Watch his eyes to see authentic desperation and anger in a man. It’s a haunting performance, and his best one to date. Nominated for the Academy Award of Best Actor in a Leading Role, DiCaprio is the favourite to win.

In a nutshell, the film is about Glass battling man and nature alike to seek retribution. At its core, the film may lack substance, and could be critiqued as simplistic. However, Iñárritu’s aim isn’t philosophical significance, but to tell the story of survival. There is no doubt that he’s achieved this, and executed it perfectly.

Visit www.cinemaclock.com to view all showtimes for The Revenant at theatres in Winnipeg.

Tune in to Mauno