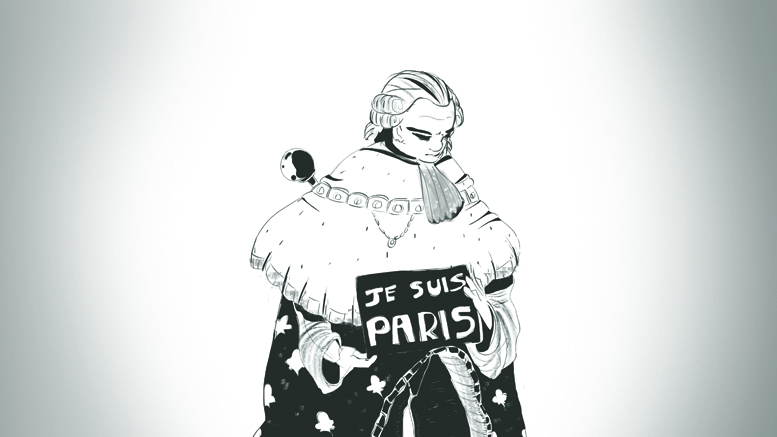 Jan. 21 marks the anniversary of one of the most important days in human history. The liberty that we enjoy on a daily basis made its transition from an idea to a reality on this day 223 years ago. It was the culmination of political, philosophical, physical, and mental turmoil resulting in an act by men and women who believed in the foundation of democracy. On Jan. 21, 1793, King Louis XVI was executed by guillotine. His head rolled no differently than the ones before it.

As we embark upon another year we can remember 2015 by celebrating our accomplishments, mourning our losses, and learning from our mistakes. To do so is intrinsic to our nature and integral to forming our motivations for the year to come. I thought it only fitting that my first piece written for the Manitoban be one of reflection. There are many events that have defined 2015, but for me there were no events more divisive or permanent than the terrorist attacks in France.

We started last year around this exact time with news of the attack on the offices of the French satirical magazine Charlie Hebdo, an attack that struck particularly close to the hearts of the people in this industry I have just joined. The day of that attack would leave 12 dead and 11 injured. Over the next twelve months in France there would be multiple terrorist attacks leading to more than a hundred deaths and hundreds of injuries.

France is not new to acts of terrorism. Between 1978 and 1988 terrorism was responsible for scores of deaths and hundreds of injuries. Armenian, Islamist, Palestinian, and anti-imperialist militant groups were bombing, shooting, and assassinating throughout France with a particular fetish for Paris. The events that took place in this last year are different than those of that decade. The events of the last year are also different than the ones that led to the death of French monarchy. Whether you accept these differences ultimately comes down to whether or not you think a death through terrorism can be justified.

The Armenians, Palestinians, and anti-imperialists who terrorized Paris did so under the guise of justifiable action. They believed the attention they would gain from terrorist attacks would create enough uproar for their causes to be noticed. The Armenians were the victims of a Turkish genocide that had never been acknowledged by that state. The Palestinians were (and still are) in the midst of a hostile takeover of their homeland.

However, the Islamists have remained the same. Their war and ideology has not changed. They still terrorize France today, only with new soldiers and under new brands. This is not surprising given the ideology that powers their militancy is older than any other; far older than anti-Zionism or the Armenian genocide.

It is this difference that also calls into question whether Islamist terrorism is justifiable on moral grounds. The Islamist ideology is religious – a type that has shown itself to be more permanent than any other in human history. The actions committed by the younger ideologies were motivated by liberty, the recognition of historical truth, or hopes for freedom.

I don’t know the answer to the Islamist world threat. I don’t trust anyone who claims to have it: politicians, professors, your neighbour. What I do know is that we cannot ignore the cause of this global threat. We cannot idle or seek to protect a set of ideas that would have King Louis XVI’s head replaced with another. We must be vigilant in our discussion of bad ideas.

The liberty that so many people paid their lives for and continue to pay their lives for compels me to challenge anyone that seeks to make ideas sacred. This is the war that will be fought in the near future on our home soil. Let’s do it honestly and unafraid.

Putting some faith in restrictions

Not your mommy’s garage