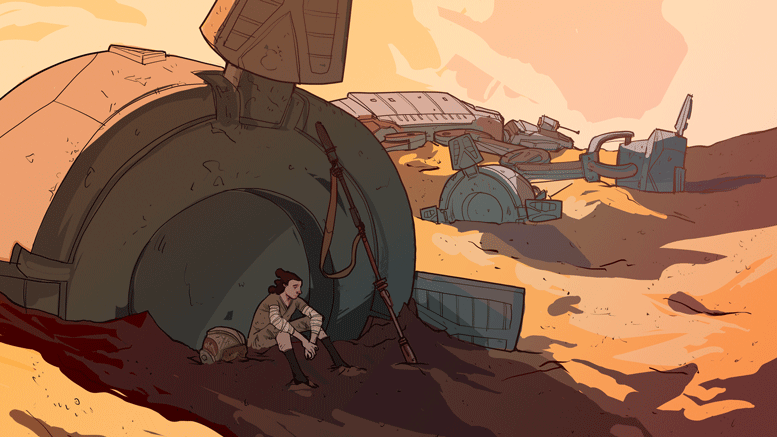 Here at the Manitoban, some of us are huge nerds. When Star Wars: The Force Awakens was released last month, it didn’t seem fair to just pick one person to review it. Arts & culture editor Seamus Hamilton-Pattison, editor-in-chief Craig Adolphe, and sports editor Mike Still each submitted their own review of the film which we compile below.

Going into The Force Awakens, I had one particularly prominent question on my mind, one that was likely shared by the many other lifelong Star Wars fans present on opening night.

Will this make up for the prequels?

From this fan, the answer is an unwavering, resounding yes. Writer/director J. J. Abrams taking the reins has given us a far leaner, more action-packed Star Wars devoid of stilted, meandering love scenes and galactic politics of episodes I-III.

Of course, many critics and fans alike have pointed out the movie’s numerous references to the movie that started it all, A New Hope. The Force Awakens focuses on the conflict between two galactic forces, the Resistance (the new Rebel Alliance) and the ex-Galactic Empire offshoot, the First Order. The movie’s central characters are a ragtag group of misfits who must work together to deliver plans, thwart Stormtroopers, and blow up a weapon. Sound familiar?

While these clever homages aren’t exactly subtle, only one plot point feels particularly shoehorned in (really? Another Death Star?) and the rest are actually kind of nice. We haven’t seen new footage of these characters, ships, and locations in years, so Abrams making a rather big to-do about their respective introductions actually comes across as quite appreciable.

The new protagonists are all immediately likeable and well-acted. The most memorable among these is the woefully under-present Resistance pilot, Poe Dameron. Oscar Isaac plays Dameron with so much enthusiasm and charm, likely drawing a little inspiration from Nathan Fillion’s wisecracking Captain Reynolds for the role. Here’s hoping we see more of this jovial, hilarious maverick in the sequels.

I cheered when Han, Chewie, and the Millennium Falcon each made their first appearances onscreen. Hell, I cheered for C-3PO. If you’re a fan of similar mind, then you will too.

The Force Awakens was a little cheesy, and perhaps slightly derivative, but we just started a whole new trilogy. There’s still two movies to go, and The Force Awakens has kicked things off in a shamelessly nostalgic, exciting, and over-the-top manner.

For anyone looking for more than a fun action movie and a nostalgia trip, The Force Awakens might come as a disappointment. While Abrams and his co-writers (Lawrence Kasdan and Michael Arndt) went to great lengths to ensure we never got near the chambers of the galactic senate, giving the movie a fast-paced adventure feel, they also steeped the story in references to the original trilogy, sapping the movie of any opportunity to develop new lore – something that even the prequels, for all the scorn they receive, were able to do.

The movie seems almost entirely focused on banking on fandom for existing concepts and worlds, rather than contributing anything new. All the new settings and lore that serve as a backdrop for the story act as pale imitations to the ones initially developed by Star Wars creator George Lucas.

While the new characters, including Rey (Daisy Ridley) and Finn (John Boyega) are exciting and welcome additions, they’re often crowded out by older characters, such as Han Solo (Harrison Ford) and Princess Leia (Carrie Fisher).

Despite the referential story and imagery, the cinematic style differs quite drastically from both the original and prequel trilogies. In place of Lucas’s wide panoramic shots and steady hand we have much more up-close, intimate, and relatively speaking, crowded shots, as well as more active camera work.

The Force Awakens incorporates a lot more humour than previous Star Wars films. Instead of the sparse, wry humour in the original trilogy (Han Solo’s “I know” in response to Princess Leia’s admission of love) and the ineffectual humour of Jar Jar Binks and occasional physical humour of R2-D2 in the prequels, Abrams’s film is loaded with legitimately funny jokes. This differs drastically from the dramatic and sometimes sombre tone set out in the original trilogy (Ewoks notwithstanding).

Between this and his involvement in the new iteration of Star Trek films, Abrams has marked himself as a financially reliable (from a studio’s perspective) maker of referential popcorn flicks – a less objectionable Michael Bay.

As a diehard Star Wars fan, I was beyond thrilled to go see the new film. When the release date finally came and I got a chance to check out The Force Awakens, I was not disappointed.

Both the plot and a number of key characters are quite similar to episodes IV-VI, and I’m totally OK with that. It’s nostalgic in a way, but also sets up the next generation of good and evil.

There were a number of important questions left unanswered, which I loved, as viewers are now left to ponder certain characters’ backstories and fates, which episodes VIII and IX are sure to answer in the coming years.

In terms of the new heroes and villains that were introduced, there’s a lot to like. I thoroughly enjoyed Boyega as Finn. He’s comedic yet relatable, and will be a fan favourite for sure.

It’s also refreshing to see a female (Ridley as Rey) play the lead protagonist. She’s powerful and intelligent, yet mysterious. It’s going to be an adventure just learning about her past – the one piece of information that intrigues me the most going forward.

Villain-wise, I’m not yet sold on Kylo Ren (Adam Driver). He showed far too much compassion throughout the film, and came across as weak in both of his critical scenes with Rey. I’m aware that he hasn’t harnessed his full powers yet, so it will be appealing to see how he progresses in the next two films.

The villain that captivates me the most is Supreme Leader Snoke. He only appeared as a hologram in The Force Awakens, so it’s still a mystery in terms of what his actual size and abilities are. He’s definitely the new version of Darth Sidious, and there are a ton of fans out there that think he’s Darth Plagueis (master to Darth Sidious, as referenced in Attack of the Clones), but I’ll save my theories for closer to the release of Episode VIII.

View all showings of Star Wars: The Force Awakens in Winnipeg at www.cinemaclock.com/man/winnipeg