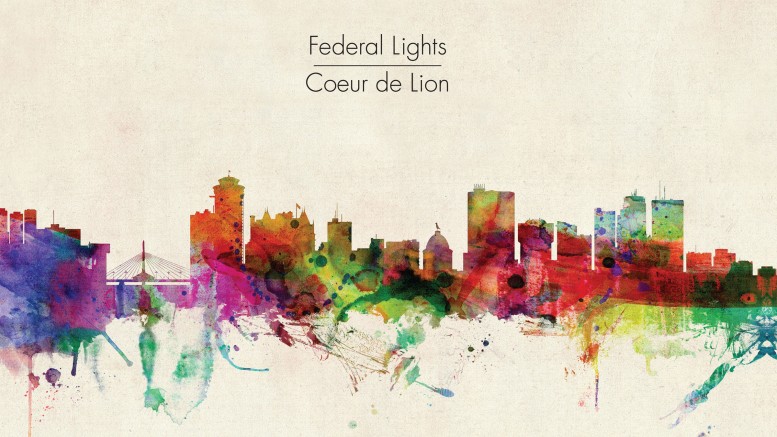 Carefully painted with poetry, pounding drum beats, and enchanting layers, Winnipeg band Federal Lights has produced a captivating follow-up to their 2013 debut We Were Found in the Fog in Coeur de Lion. The album is set to be released Jan. 29, with Canadian tour dates to be announced shortly.

Coeur de Lion opens with the catchy groove of “Into the Ground,” one of the more uplifting tracks on the record. With joyful harmonies that soar over the chorus and delicate glitters of xylophone melodies, the song highlights a theme of endurance and finding strength even while feeling broken.

The title track switches things up and features Jodi Roy, whose voice can only be described as liquid honey, pure and sweet. It allows for a sharp contrast from counterpart Jean-Guy Roy’s low and husky vocals, which primarily take the lead role on the rest of the album. The track can almost be described as psychedelic – listeners can expect wanting to close their eyes and simply float away into space.

Other standout tracks include folk anthem “This Town,” which could likely find its way onto your summer road trip playlist, as well as “Parachutes,” a slow-moving and stunning duet between the two vocalists that finishes the album.

My only criticism is that a few tracks tend to border on the line of being repetitive, though they still have enough appeal within other aspects to not be written off completely. Additionally, I would welcome a stronger vocal presence from other band members – in their rare appearance, it added compelling variation and a unique layer to the record.

Listeners will no doubt be drawn in by the emotional stories told in Coeur De Lion. Mesmerizing, stormy and filled with electrifying tension, this is a must-listen for anyone wanting to further explore the Winnipeg music scene.