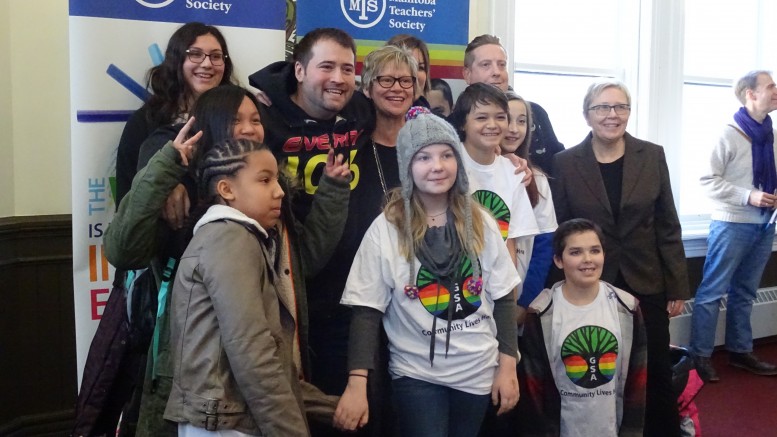 Jan. 15 marked the official launch of the final results of a national study on LGBTQ-inclusive education, dubbed the Every Teacher Project. The study – headed by University of Winnipeg professor Catherine Taylor in partnership with the Manitoba Teachers’ Society – is the largest of its kind worldwide with 3,400 participants.

The study is comprised of an online survey, as well as 24 focus groups, with the intention of investigating “Canadian educators’ experiences and perspectives on LGBTQ-inclusive education.”

“We looked into the data and found that teachers are typically being held back by system resources – lack of training, lack of professional development, lack of resources, and lack of support from school leadership and school division leadership,” said Taylor.

“That’s discouraging in a way, but it’s also something that points a way forward for us and shows us what has to be done with the situation.”

While all the data collected during the study has been compiled into a 180-page report and analyzed quantitatively, there is still work to be done to analyze the data qualitatively, according to Taylor.

Taylor believes that the way to mitigating these issues is through LGBTQ-inclusive education to provide students with positive examples of LGBTQ individuals, which will help reduce – and hopefully eliminate – the harassment these students face regularly.

Another major component of LGBTQ-inclusive education is support at the upper levels of the education system. Teachers need to know that they are supported and that their jobs are not on the line when standing up for their students. Teachers and educators also need adequate resources to know how to effectively promote inclusivity and answer any questions that they may be asked.

Taylor used the Roman Catholic school system of Canada as an example of what happens when there is not support at the top of the system. The teachers in the Roman Catholic school system were almost as supportive of LGBTQ-inclusive education as teachers in the public system. When prodded, however, it was found that these teachers were far less likely to engage in LGBTQ-inclusive initiatives in practice. Taylor believes this has to do with the amount, or lack of, administrative- and ministry-level support.

“Teachers in Roman Catholic schools were only a few percentage points less likely to say they approve of this work, but they were dramatically less likely to have actually talked in inclusive ways or to have participated in any LGBTQ efforts at their school. And I think the reasons for that are obvious – there is less system support for them to do that work.”

Taylor believes that in order for the necessary support to exist, the movement toward inclusivity must involve individuals in positions of authority, rather than just the individuals affected directly by antagonistic behaviour – which, in most cases, are students.

“I think this is a very grassroots kind of movement and most of the pressure for this work has come from students and from teachers who have seen the harm caused by homophobia, but it would be really nice if the grassroots could have the support of the authorities at the highest level.”

An example of such legislative support is the recently amended Bill C-18 in Manitoba, the Public Schools Act, headed by Nancy Allan, the MLA for St. Vital. The amendment focuses on the areas of the Act regarding bullying and human diversity, and also protects the rights of gay-straight alliances. At the presentation, Allan spoke extensively about her involvement with Bill C-18, which began when an LGBTQ student died as a result of harassment. Unfortunately, this is not the most recent case of a student dying as a direct function of hostile behaviour toward them due to their sexual orientation.

Taylor had a similar start to her engagement with LGBTQ individuals and their rights. She first became involved in addressing homophobic behaviour in schools while teaching at the University of Winnipeg as a professor of education. She found that when she included LGBTQ-inclusive education in her courses, she experienced kickback from some students, which she flagged as an issue that needed to be addressed.

“I teach courses in anti-oppressive education, and I always included anti-homophobia education in my courses. About 10 years ago, I was having some students leave my classroom in tears or shaking their fists at me, denouncing me for daring to suggest that it’s alright to tell a child that it’s okay to be gay,” Taylor said.

“I did a lot of work trying to figure out what it was going to take to shift things for students – that was my entry point. Then it became apparent that there are all kinds of people trying to do this sort of thing and their road block was that they didn’t have solid large-scale research to point to. It was work that needed to be done.”

Upon completion of the Every Teacher Project, Taylor and her team received a grant from the Social Sciences and Humanities Research Council to complete a knowledge mobilization project. They will work with a group of representatives from different teaching organizations nationally, such as the Manitoba Teachers’ Society, to create what Taylor refers to as a “recommendation toolkit” to help educators practise LGBTQ-inclusive education.

“In each section, there will be our project recommendations, research to back up our recommendations, and suggestions for how to respond to questions at those different levels. That’s going to take us about another nine months to pull together,” said Taylor.

“Then, these teaching organizations across the country are going to have a toolkit to help push for system changes in their own provinces and territories.”