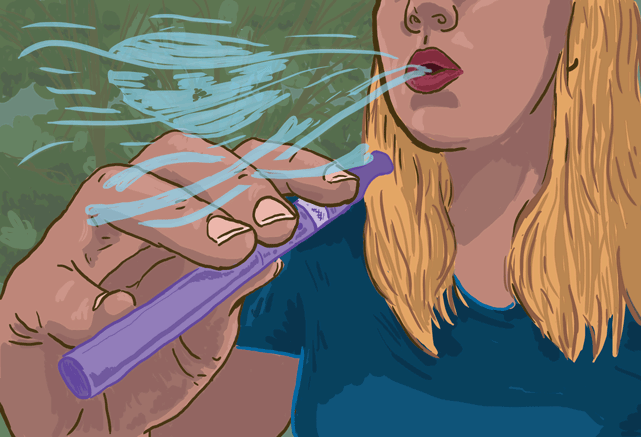 E-cigarettes have exploded in popularity in a very short time. What started as a possible alternative to smoking and a tool to help people break the habit has now become an aesthetic accessory in some cliques. Using e-cigarettes to quit smoking may not be the best idea, as a recent study has shown that many e-cigarettes contain chemicals that can directly cause lung disease.

One of the primary chemicals in question, diacetyl, is typically used for flavouring and has been linked to a lung disease called “popcorn lung.”

This disease is named after several incidents in which workers became ill after inhaling butter flavouring from microwave popcorn processing plants. This deceptively silly name (its actual name is bronchiolitis obliterans) belies the very serious nature of the disease, as it is incurable and difficult to diagnose. Diacetyl is also a tobacco additive.

“Recognition of the hazards associated with inhaling flavouring chemicals started with ‘popcorn lung’ over a decade ago,” said Joseph Allen, the lead author of the study, in an interview with the Harvard Gazette.

“However, diacetyl and other related flavouring chemicals are used in many other flavours beyond butter-flavoured popcorn, including fruit flavours, alcohol flavours, and, we learned in our study, candy-flavoured e-cigarettes.”

The study, which was published in the journal Environmental Health Perspectives, tested 51 different types of e-cigarettes for diacetyl. The study also tested the brands for acetoin, and 2,3-pentanedione, two other flavouring agents with links to respiratory illness.

The study did not mince words about the serious nature of these findings, saying, “urgent action is recommended to further evaluate this potentially widespread exposure via flavoured e-cigarettes.” E-cigarettes aren’t regulated by the U.S. Food and Drug Administration, and global sales of e-cigarettes hit $8 billion in 2015.

Diacetyl is used in e-cigarettes to produce a wide variety of flavours. Some have a more “natural” inspiration, such as strawberry or mango e-cigarettes, while some have sugary flavouring and cartoonish packaging (cupcake-flavored e-cigarettes, for example), leading some people to worry that the marketing would appeal to young children.

Attempting to combat this issue, Manitoba passed a law that prevented people from vaping in indoor public spaces in November 2015.