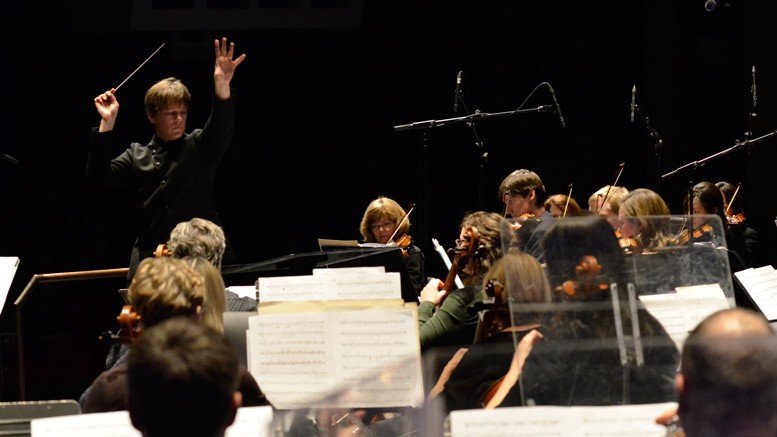 Winnipeg’s New Music Festival (NMF) is turning 25. To celebrate their anniversary, the local festival will be hosting many exciting events popping up at various venues across the city from Jan. 23-29.

In 1989, Bramwell Tovey was appointed to the position of music director for the Winnipeg Symphony Orchestra (WSO). Tovey had a widespread knowledge of Canadian music and energy that was matched by the WSO’s first composer-in-residence, Glenn Buhr.

Together, they focused their enthusiasm and enterprise for music into launching the first NMF in 1992. Buhr will be returning to the NMF this year to celebrate the quarter-century anniversary of the widely-acclaimed festival debuting new music of his own.

Since then, many contemporary composers – both in Canada and abroad – have come to Winnipeg to share their music with the open and receptive audiences of NMF.

“There is no orchestra [that has performed] in our 25 years that also has seven consecutive nights of living composers. It’s something extremely special and internationally recognized, so from that angle it is very unique.”

Micklethwate’s journey with the NMF started 10 years ago, when he was chosen as conductor of the WSO.

“For two or three years, I was looking and guest conducting different orchestras from Honolulu to Winnipeg to Nashville, and it’s like a blind date, but for one person to choose 80 people,” Mickelthwate said of finding the orchestra he would be best suited to conduct.

“Here it felt good, they picked me and I picked them. That was 10 years ago. Then I realized they had this fantastic festival, and I became part of this whole endeavour.”

This year, there will be several acts that push the conventional boundaries of going to the symphony. One of the featured performances this year is the So Percussion quartet, which will be playing pieces by David Lang, Steve Reich, and Bryce Dessner.

So Percussion’s performances are especially unconventional because of their instrument selection. The quartet makes music on every-day percussive objects such as tin cans and corked wine bottles , even making their own actual instruments on occasion.

“It’s always really fun to work with percussion,” said Mickelthwate, explaining that So Percussion was chosen based on the receptiveness to similar acts in the past, as well as their unique talents.

Another stand-out event will feature members of the WSO at Pan Am Pool. The event, titled Music and Trauma, features the performance of composer Gavin Bryars’ “The Sinking of the Titanic” with the Winnipeg Synchronized Swimming Club and Sistema Winnipeg Choir to add to the multimedia performance.

Members of the WSO will be perched on Pan Am Pool’s fixed diving platforms, playing above the pool. U of M Symphony Orchestra cellists Andre Washington, Leandro Salterelli, and Yaxin Sun will be included in the musical performance.

“We’ll dim the pool lighting, we’ll have some blue lighting, and dry ice. We don’t really have any rehearsal time because it is a public pool, so they will be shutting it down in the afternoon to set it up. It will be quite exciting for everyone how it will turn out.”

Mickelthwate highlighted some of his favourite performances throughout his involvement with the festival.

“We had works where instruments were not only on the stage, but in the balconies, so we were surrounded. I was surrounded by instruments. There was one composer – John Corigliano – from New York, and he wrote a piece, ‘Circus Maximus.’ It was a really powerful piece, and we were all surrounded by sound.” Mickelthwate told the Manitoban.

“Also, when we had movie director Jim Jarmusch. He did Down by Law and several other really cool independent films. We were workshopping an opera of his, and it was for me personally, really exciting.”

Among this year’s performances, one of the highlights is sure to be Stephen O’Malley in both his solo show at Union Sound Hall and his collaboration with the WSO on the festival’s closing night at the Centennial Concert Hall.

His music is an unconventional choice for collaboration with the WSO, but both Mickelthwate and O’Malley acknowledge and embrace this odd combination.

“It’s very different. The classical tradition is based on melodies. The melody and compliment chords that shift fast, it’s a different way of architecturally putting together a piece of music. Stephen O’Malley and other sound artists may play one chord for six minutes, and you’re just taking a bath in that sound. The philosophy behind them is different and the way he is writing is different,” said Mickelthwate.

“It’s so interesting nowadays with contemporary music. It’s just a huge range of creativity of sounds, and his is that kind of doom-drone that sticks in one sound, and morphs really slowly. I like that, I personally really love it.”

Mickelthwate went on to explain his belief that musicians like O’Malley just have an entirely different perception of sound from classical composers, tradition notwithstanding.

“Long stretches of simple, slow shifts of sound: softer, louder, percussion banging in. It’s his own thing. I like that different way of looking at composition, and that’s why we picked him.”

O’Malley’s perspective on classical music and the collaboration is intriguing and promising in terms of creating a unique musical experience.

“Many forms of music inspire me, and I find genre to be a limiting idea. The symphony orchestra is a strange, immensely complex and arcane instrument with a conduit directly into history,” said O’Malley.

“I find the range of what can be accomplished on and with this instrument. I am [a self-taught] musician and composer, the exploration of [musical] ideas in parallel universes fascinates me.”

Though classical music may seem a little out of the musical taste of many, the festival is meant to push the boundaries of conventional views of the genre, while incorporating other elements that are meant to please the senses including food, drink, and visual arts.

“It is a very creative place – we connect. It’s a coming together of different art forms and it is breaking the barriers of what one is used to, and it’s a lot of fun. Everything is allowed, and it’s a place of the highest creativity, right here in Winnipeg,” said Mickelthwate.

Passes for NMF are just $49 for students, $89 otherwise. To purchase passes, or find more information on shows and individual ticket prices, visit www.wnmf.ca.

Practicing the art of living