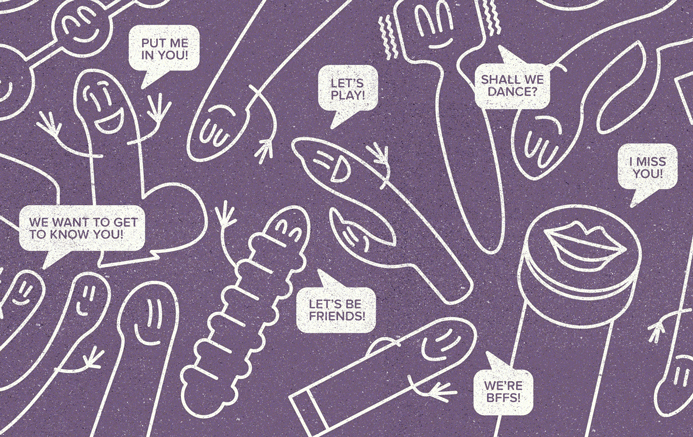 Adult stores have been around for ages, but whether through apprehension or simply the feeling of not knowing how or where to start, it’s not uncommon to find oneself over the legal age, never having set foot in one of these places.

Until last week, I was part of that demographic. It was in the hope of educating myself (and hopefully some of you, dear readers) that I chose to dive face-first into Winnipeg’s sex shops and tour three local establishments: Osborne Village’s Smitten, the St. James St. location of Adam & Eve, and Taylor Ave.’s Love Nest.

What I found in each was a positive, welcoming atmosphere with both staff and management dedicated to providing customers with a fun yet educational environment to explore their sexual preferences.

According to Cheryl DePaulo, manager of Smitten, an increasing number of people are beginning to realize this.

“You’ve got TV shows that are talking about toys and advertising them, which has people coming into the store that normally wouldn’t.”

“She was the woman who started the birth control pill movement back in the 70s in Toronto,” said Zuzanki.

“She got known all across Canada and the universities as a sex educator. She started a radio show back in the 80s [Sunday Night Sex Show]. We’d have customers come in on a Monday or Tuesday morning and say to us ‘do you have that toy that Sue talked about last night?’”

Each establishment displayed an acute awareness of the need to acclimatize newcomers to their line of products. According to Adam & Eve sales associate Joanne Byra, this was exemplified by the very layout of their store.

“The lingerie’s first, then your lotions and lubricants, then your smaller toys that, like [fellow sales associate] Tracy said, don’t look like big phallic penises. If people are shy, they don’t have to go past that point. They can stay up here,” said Byra.

A positive demeanour and tactical layout was shared by all three locations, but my sources at Smitten, the Love Nest, and Adam & Eve each spotlighted a different focus or specialization of their shop.

Another Adam & Eve sales associate, Tracy Chlopecki, cited the store’s emphasis on sexual education, as well as the store’s self-identification as a sex “boutique,” rather than a shop.

“We have a lot of training in sexual education. We’re here more to help than just sell,” Chlopecki said.

“We’ve had a few seminars, we’ve had them on the female orgasm, knowing yourself. Last year, we had one for Fifty Shades of Grey on Valentine’s Day on rope-tying, the right way of doing it. Our next one starts December 3rd and that’s on percussion play […] it’s like, the floggers [whips] and the proper ways to use them safely, how to bring them into the relationship. We want people to be safe before just buying it and trying it.”

However, Chlopecki told the Manitoban she believes there’s a silver lining to Fifty Shades of Grey.

“More people are more interested to get to know the real, behind Fifty Shades story. That’s why we do seminars on the proper ways, the safe ways,” she said.

“I think Fifty Shades did open a lot of eyes. It’s not just behind locked doors. It had bad ways of doing it, but it did make people want to be more educated.”

Regardless of the particular, defining aspects of each shop, all staff and management expressed a genuine, profound enjoyment of the business.

“It’s a fantastic job,” said DePaulo, who has been working in sex shops and boutiques for 10 years.

“You get up looking forward to going to work in the morning […] You never know what a day of work is going to hold in this type of industry. It’s a lot of fun, I get to talk about sex all day.”

Zuzanski, who has been in the sex shop business for 28 years, agreed wholeheartedly.

“It’s fun helping people. Everybody that comes in here is happy, or sad because maybe their body parts aren’t working 100 per cent. So, because it’s this kind of environment, it’s fun to help them.”

“I’ve loved lingerie since I probably shouldn’t have,” said Byra, also a 10-year veteran of the business.

“Once you get a taste of this industry, once I realized how comfortable I was and how comfortable I make customers feel, you can’t put a price tag on that. I don’t care if they spend $5. When they tell you they drove out of their way to come and see you because of the service they receive, that is the biggest bonus ever.”

For more information about the stores in this article, please visit www.adamevewinnipeg.com, www.areyousmitten.com, or www.lovenestonline.com.