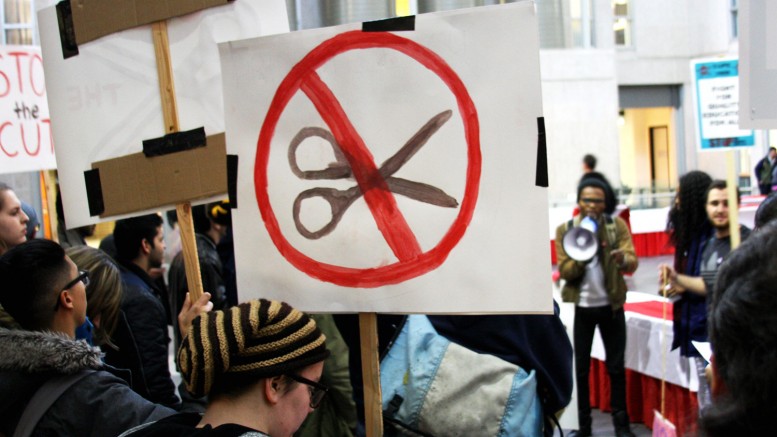 A crowd of University of Manitoba community members demonstrated their dissatisfaction over the school’s budgetary process at a rally held last Tuesday afternoon.

Participants protested budget cuts to faculties and departments and an increase in tuition fees for international students. The U of M’s 2015-16 budget included cuts of up to four per cent for academic and administrative units and an 18 per cent hike to the fee differential for international undergraduate students.

The rally started in front of the Gallery of Student Art in University Centre at 3 p.m. Some 60 people gathered for presentations about the anti-cuts campaign and international student movement. Speakers were generally critical about a lack of consultation and notification by the university prior to slashing the budget and raising student fees.

Jennifer Black, vice-president unit 1 of CUPE 3909, recited a poem about the commodification of post-secondary education and the corporatization of the U of M campus, which some demonstrators blame for backing what they consider to be misled priorities by the university’s administration.

“At best you are capital, at worst you’re a cog,” Black told the assembly.

“Kerplunk is a succinct metaphor for the current state of neo-liberal labour and education,” reads the description of Campbell’s project. “We are told to support ourselves while the ground we stand on is taken out from under us.”

After the series of presentations, protesters proceeded to the Engineering Atrium where the demonstration dwindled down to about 35 people outside the entrance to the university’s regularly scheduled board of governors meeting at 4 p.m.

“There is no evidence that budget cuts are the necessary result of a parlous financial situation, rather, these cuts are a matter of choice – a choice to prioritize capital and marketing spending over the quality of education,” reads a letter signed by the Student Action Network. The letter was addressed to the meeting’s chairperson, Patricia Bovey, U of M president David Barnard, and the university’s board of governors.

“We further call for full transparency of university finances and increased public funding for post-secondary education,” their letter continued. It went on to call for better treatment of international students, and for the university to restore funding to previous levels and halt all plans for further cutbacks.

The letters were distributed to the rally’s attendees, and were intended to be handed to board members on their way into the meeting. Barnard strolled into the meeting without being handed letters or dealing with any other direct confrontation.

Retaliation
Over the course of the rally, between speeches, artistic displays, and a performance by students from the faculty of music, protesters made collective calls to “stop the cuts” and denounce tuition hikes for international students.

“We are not cash cows,” shouted the demonstrators.

At one point, their cries were met with retaliation by a handful of engineering students from the 400-level balcony above the atrium. Equipped with drums, a tuba, and a guitar, the engineering students played to the tune of “Solidarity Forever,” an old labour hymn, briefly overwhelming the planned events of the rally.

Members of the University of Manitoba Symonized Engineering Marching Band said their interruption was not directed against the anti-cuts coalition or the international student movement, but rather, it was their way of making some noise and marking their territory in the engineering building.

“We heard noise, and we retaliated,” one of the engineering students told the Manitoban.

Further possible scale backs
Faculties and departments are already grappling with the current round of cuts and may be bracing for further scale backs, whereas international students felt the blow of the 10 to 18 per cent increase in tuition differentials at the start of the academic year – an uptick which has led to $7.6 million in new revenue for the university.

“Everybody in this society and community seems to accentuate the ideal of inclusion, and you come to university and you see everywhere this disconnection and separation,” he said.

“The hikes could be continued, and depending on what it could be by next spring, I would say that it’s not something that any international student wants to deal with.”

U of M professor explores swine housing options for farmers