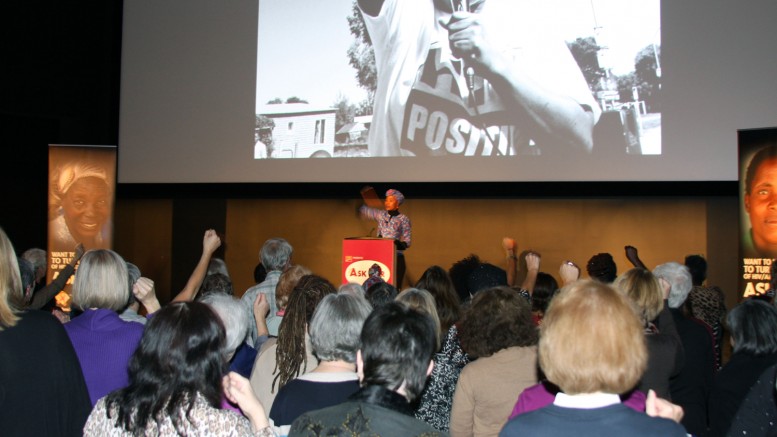 On Nov. 25, the Metropolitan Entertainment Centre hosted the second national stop for the Stephen Lewis Foundation-sponsored Ask Her Talks in conjunction with World AIDS Day on Dec. 1.

Five women from Africa and two from Canada provided a stimulating and thought-provoking presentation discussing the role of women in the fight against HIV and AIDS in Africa.

The women speaking were activists from Ethiopia, Kenya, South Africa, and Zimbabwe, two of whom are HIV-positive themselves.

A prevalent theme throughout the night was that voices of African women were often ignored when it came to the discussion on AIDS. The problem with that is that in sub-Saharan Africa, women and girls account for almost 62 per cent of new infections.

AIDS is the biggest killer of adolescent girls in South Africa, and girls between the ages of 15 and 24 are five times more likely to contract HIV than boys of the same age category.

“Transmission is still a huge problem, especially among youth – university students and high school students. So it seems as though the world is quiet about HIV and AIDS, but it is still there. That’s the most important thing for people to understand.”

Among those in attendance was a Winnipeg group called Grands ’n’ More whose goal is to raise awareness and funds to help fight the AIDS pandemic in Africa.

Grands ’n’ More is one of 240 groups nationally that are affiliated with the Grandmothers to Grandmothers Campaign of the Stephen Lewis Foundation. Members of the group in attendance emphasized the importance of raising funds for children orphaned by AIDS in Africa, but also supporting the women who end up looking after them, who are primarily grandmothers.

As founding executive director of grassroots organization Developing Families Together in Ethiopia, Belete underlined the importance of community development and creating a network of grandmothers who are often heads of the family when children are orphaned due to AIDS.

The Ask Her Talks aim to inspire people to start helping in the fight against AIDS in Africa. According to the speakers, the way to do that effectively is by helping the women who are experts in their communities and know what those communities need the most.

“It’s so important to fund community-based work at the grassroots level, like all the organizations represented by the Ask Her Talks speakers.”

Ask Her Talks is already creating the necessary conversation to help in the fight against AIDS in Africa. Though it is unclear whether or not an increase in charity is occurring quite yet, it is an issue coming under the spotlight.

“What I have seen is that people are really listening to what myself and my fellow speakers are saying. And it seems like they are questioning – they are asking themselves: ‘We have to do something, are we doing enough?’” said Belete.

“It’s too early to know for sure, but it seems people are listening and learning. In some cases, they didn’t have much information about HIV, and this talk is helping them to understand that still the battle is not yet won, and that there are still many, many people who need their support.”

Richardson closed the night with a message for all in attendance.

“I did promise you inspiration and stimulation. We thank you for your insight, your courage, your timeless work, and your leadership. I know we have all come here tonight, with open hearts and minds ready hear from these African women leaders,” she said.

“Well, we heard you, and on the occasion of World AIDS Day we pledge to you that we will carry your message to the world.”

To learn more about the speakers and their message, visit www.askhertalks.com