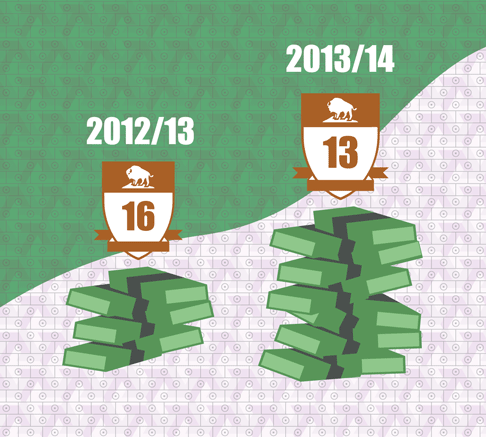 In the latest rankings of the top 50 research universities in Canada released by RE$EARCH Infosource Inc, the University of Manitoba has improved from last year, moving up three spaces from 16th place to 13th.

According to the report, the University of Manitoba was the recipient of $154.3 million in sponsored research income in 2014, which accounts for 2.31 per cent of the total amount of research income ($6.67 billion) recorded by all the top 50 Canadian research universities in 2014.

“Our research is self-funded. We use advertising revenues from our annual Canada’s Innovation Leaders publication and from data sales and consulting to fund our activities,” Freedman said, adding that the recent ranking reflected one of the five ways used by the research company during the ranking of institutions.

“The quality of research done by our researchers, which includes faculty members, postdoctoral fellows, research associates, and graduate and undergraduate students, has been the main driver to increase our research enterprise at the university,” he said.

“Our researchers envision innovative projects and submit well-written applications to obtain funds on a competitive basis.”

He added that the competitive attitude of the researchers helped them to receive funding from numerous sources including international organizations that are outside Canada.

“They receive funding to conduct their research from many sources including federal and provincial governments, not-for-profit and for-profit organizations, community organizations, charitable foundations and private donors,” he said.

“Many researchers also receive funding from several international organizations such as the U.S. National Institutes of Health and [the Bill and Melinda] Gates Foundation.”

There was, however, a decline in the total amount of research funding for the top 50 Canadian research universities as a whole which amounted to a decline of 1.6 per cent when compared to the previous year.

Mark Hudson, president of the University of Manitoba Faculty Association, commended researchers on campus for their work, suggesting the increase in local funding was indicative of the quality of research being done on campus.

However, he also laments the overall drop in public federal support for research work in Canadian universities and called it an act of negligence on the part of the federal government.

“Even though the University of Manitoba is up, the total amount of dollars going into universities across Canada is down, if you look at the amount of research money across the institutions in the country, there is a decline, what that means is that our gains are coming at another university’s expense,” he said.

Correction: The original version of the article said that Mark Hudson was critical of the university rankings. The wording has been changed to clarify that he is critical of the overall reduction in federal research funding and not the rankings. Additionally, an error in the graphic has been fixed.