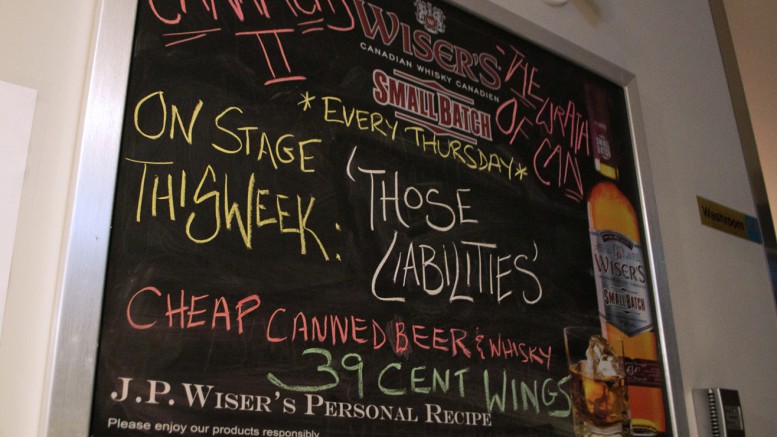 After unsatisfactory financial results prompted the summer closure of the University of Manitoba’s campus bar, the Hub is performing well in the new school year and is continuing to make improvements, including the installation of a new sound system.

While giving a financial update at the University of Manitoba Students’ Union’s (UMSU) Oct. 22 council meeting, UMSU president Jeremiah Kopp stated that he believes the Hub is “on pace to break even” this year, reporting a profit of $23,000 for the month.

“The goal with the [UMSU] businesses and especially the Hub is that they eventually start producing in a way that they can help feed the endowment fund, and feed a contingency fund for the businesses, so if they ever want to make renovations they can dip into that,” UMSU vice-president internal Zach Leclerc told the Manitoban.

Leclerc also stated that the addition of a new sound system works in tandem with an increased emphasis on live music at the Hub, citing Hub manager Brandon Whyte’s “Canarchy” music series, which launched during the previous school year and is continuing through this year.

”Last year, Brandon’s big idea was Canarchy – every Thursday there were live rock bands […] It had a pretty reasonable following, depending on the groups that were in and the interest level of that group and it did well […] This year, Brandon’s focused more on just bands in general, recognizing that students nowadays are more into indie or funk than heavy rock.”

Whyte informed the Manitoban that the Hub’s summer closure gave him time to plan for the upcoming school year, stating that he focused on cutting costs, adding menu items, and thinking of creative marketing. Whyte also confirmed Leclerc’s comments on his emphasis on live music.

“I think live music in a campus bar is the perfect vibe, the perfect atmosphere,” said Whyte.

“I’ve seen some amazing bands all over this country at campus bars, so I really love the idea of bringing that back into a big part of the Hub […] Not only getting a great sound system, but getting one of the city’s best audio techs as well, it steps us up.”

The expert in question is Marc Norris, who has worked with UMSU for 12 years. Norris installed the new sound system himself and now works as the Hub’s head audio technician.

“Well, me and [UMSU general manager] Thomas were talking, and I just kind of felt that – when I came and saw the original sound system – it was adequate up to a certain point, but we have a really great sound system downstairs that sits down there for the majority of the year not being used,” said Norris.

The large sound system will still be used for the big UMSU events on campus for which it was originally intended. Both Norris and Whyte noted that the sporadic occurrence of these events means the sound system’s occasional removal from the Hub can be scheduled around and should not disrupt the bar’s own events.

Whyte and Norris confidently informed the Manitoban that their partnership and the recent changes to the Hub will set the bar apart from the other live music venues in Winnipeg that primarily conglomerate in the city’s centre.

“With everything that is in place now, with Brandon, myself, and the system, there is nowhere else that’s gonna be like this in the city,” said Norris.

“The other fantastic PAs that we have in this city are all in dance clubs […] I’ve taken a lot of care and a lot of time with this system to make it sound this good. It’s not just a case of the systems around the city, it’s a case of how much time people have put into the system to make it do what it needs to do.”

“We also have some of the cheapest pricing in the city,” noted Whyte.

“I know when I was a poor musician, it was awesome to go to bars that understood that they couldn’t get $6 a pint from people or things like that.”

When asked for his thoughts on the future of the Hub, Whyte promised continuous improvement with three words.

For more information on events at the Hub Social Club, go to www.facebook.com/the-hub-social-club

D.O.A. on mediocrity, punk and the Canadian lumberjack look