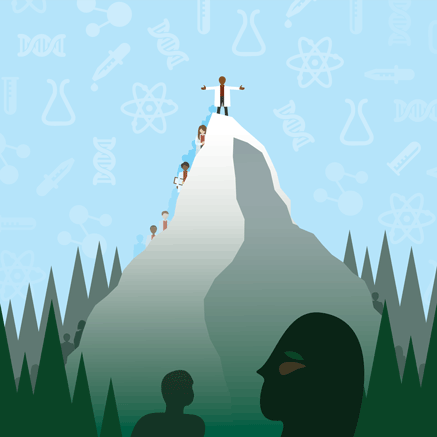 Canadian scientists are finally receiving real support from their government. Almost immediately after being sworn in as prime minister, Justin Trudeau began working to “unmuzzle” scientists and their research.

For almost a decade, scientists were silenced by Stephen Harper’s restrictive policies. As of 2006, journalists were no longer allowed to speak directly with scientists, but instead had to go through government communication officers, which typically resulted in delayed and unclear answers.

The science community fought back. The Union of Concerned Scientists, an American organization that advocates for scientific integrity, wrote to Harper in an open letter in 2014, urging him to revoke the communication blocks faced by federal scientists. The letter also contained over 800 signatures from 32 countries.

In 2012, a mock funeral was held on Parliament Hill to mourn “the death of science.” People wore lab coats or all black and delivered eulogies.

Eliminating the communication blocks was a key point of Trudeau’s campaign. The official website of the Liberal party includes a petition titled “Stand Up for Science” and implores people to consider where their tax dollars meant for research are going, saying “your money pays for government research – but Mr. Harper continues to muzzle scientists and cut off their ability to share information.” The petition is still available to sign.

Trudeau also promised to “establish a Chief Science Officer to ensure government science is freely available to the public,” a motion that had been put forward by the Liberals in Parliament once before, but was defeated by the Conservative majority in May 2015.

Trudeau did not waste any time in beginning to make good on his promise to change restrictions on scientists.

Just days after Trudeau and his cabinet were sworn in, Navdeep Bains, the newly appointed minister of innovation, science, and economic development, released a statement ensuring the Liberal government would “treat scientists with respect.”

“That is why government scientists and experts will be able to speak freely about their work to the media and the public.” the statement continued.

“We are working to make government science fully available to the public and will ensure that scientific analyses are considered in decision making.”

Federal scientists who may have worried Trudeau’s promises would dissipate after his landslide win had their fears assuaged almost immediately.

Journalists requesting to speak with Bains after the statement received prompt responses. Pauline Dakin, the national health reporter for CBC News, called this “a remarkable thing.”

“I covered the national health beat for almost 14 years,” Dakin wrote in an article for CBC.

“In the last six or eight years of that assignment, I was never able to interview the federal minister of health. The only time the minister or a government health spokesperson appeared in my stories was following a staged media or public event with prepared statements.”

Only time will tell if Trudeau and his team will continue to promote and improve communication and transparency among federal scientists and the general public past this post-election honeymoon period.

After a decade of darkness, however, it looks like Canadian scientists are finally beginning to see the light.

What ya gonna do when the police want to talk to you?