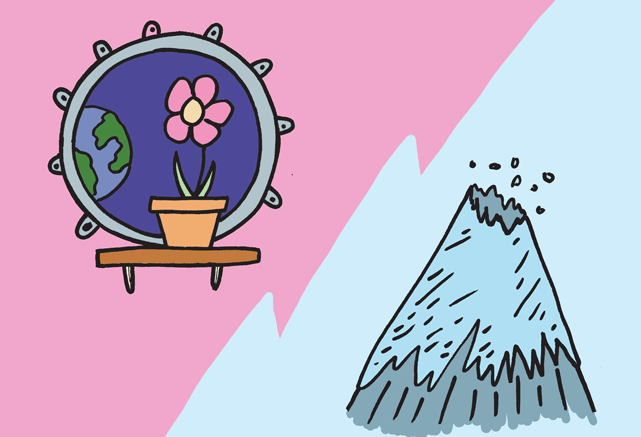 NASA has released 3D maps that show what might be ice volcanoes on the southern region of Pluto, the dwarf planet.

The maps, which were released at the Annual Meeting of the American Astronomical Society’s Division for Planetary Sciences in National Harbor, MD, are the result of the combination of images taken during NASA’s New Horizons mission.

The maps appeared to show two mountains, which researchers believe may be cyrovolcanoes. These volcanoes appear to be completely different than their earthbound counterparts, and erupt substances such as ice and nitrogen.

While it is not confirmed that these mountains are in fact cyrovolcanoes, they do have physical evidence that ties them to Earth’s volcanoes.

“These are big mountains with a large hole in their summit, and on Earth that generally means one thing – a volcano,” said Oliver White, one of New Horizon’s researchers.

The mountains, named Wright Mons and Piccard Mons, are both between two and four miles (3.2 to 6.4 km) tall and hundreds of miles wide.

If it is proven that Pluto does in fact have recently active ice volcanoes, it will open up many questions about the nature of Pluto’s structure.

Volcanoes need heat, and therefore an energy source, to be active. There is speculation as to where Pluto would get this energy, but no solid answer just yet. There is some speculation the heat source is coming from Pluto’s core, although this remains unconfirmed.

Whether these mountains prove themselves to be ice volcanoes or not, they are a breakthrough in our understanding of Pluto’s geological surroundings.

Flowers will bloom in space for the first time

NASA announced that as of Nov. 16, there are flowers growing in space for the first time.

The experiment, adorably named “Veggie”, will have zinnias growing in the International Space Station (ISS) for 60 days. The zinnias, a member of the daisy family, are expected to be fully formed by the beginning of the new year.

The experiment, developed by Orbital Technologies Corp. in Madison, Wisconsin, is being carried out by astronaut Kjell Lindgren. Lindgren will activate LED lights, water and nutrient systems, and monitor the flowers’ growth.

This is not the first time plant life has grown in space. Astronauts have already successfully cultivated and eaten romaine lettuce while on the ISS. NASA hopes to have tomatoes growing in space by 2017.

Growing the zinnias will take twice as long as the lettuce did, however.

“Growing a flowering crop is more challenging than growing a vegetative crop such as lettuce,” said Giola Massa, the team leader of the NASA scientists working on the Veggie experiment. “Lighting and other environmental parameters are more critical.”

Monitoring the zinnia’s growth will provide data on how flowers survive in microgravity, and getting fresh food growing on space stations has a long list of benefits.

There is also the inevitable speculation that this research is the beginning to the possibility of communities one day living healthily on space stations.

For now, however, space gardening is in its beginning stages. Only time will tell.

Researchers working with Atacama Large Millimeter/submillimeter Array (ALMA) have spotted a dwarf star that has a magnetic field that compares to our sun’s.

The dwarf star, named TVLM 513-46546, exists about 35 light-years from Earth. The star is on the border between being categorized as a relatively cool and small red star and a slightly larger brown dwarf star.

The star creates solar flares that erupt constantly, and these flares are unusually intense compared to the relatively small size of the star. The flares may be associated with the star’s incredibly strong magnetic field.

To put it into perspective, this star is one-tenth the size of the sun. The star has magnetic fields that are hundreds of times more powerful than the sun’s. This star is also 10,000 times brighter than the Sun. The Sun takes an entire month to perform a full rotation. This star performs a full rotation in about two hours.

The sun, however, provides benefits to the earth that this star would not be able to.

The magnetic field of the star is so strong that it creates radiation that can reach other planets. If the Earth were close enough, the magnetism would render our satellites useless.

Additionally, such radiation would have major implications on the environments of nearby planets.

“It might be extremely difficult for life to evolve at all in such a stormy environment,” said Peter Williams of the Harvard-Smithsonian Center for Astrophysics in an interview with ScienceDaily.

Red dwarf stars are the most common star type in the Milky Way, and because of this, astronomers are particularly interested in the unusual strength of this one.

Researchers are not yet sure if this star is the first discovered in a whole separate breed of strong red dwarfs, or, stranger still, an anomaly.