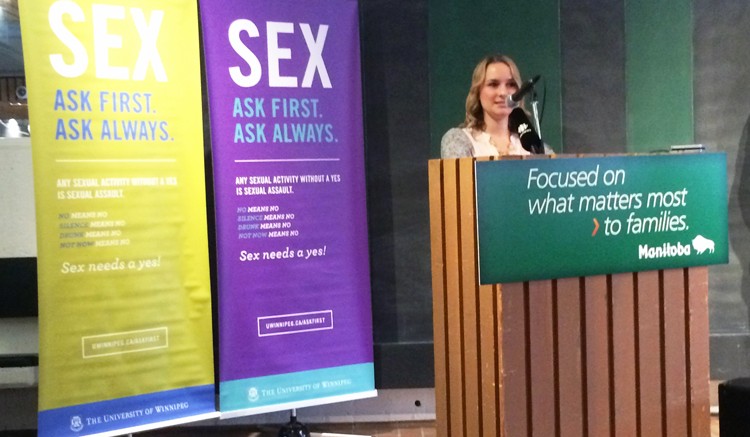 The Nov. 16 throne speech – which set the tone for the final legislative session before the writ drops on an April 19 provincial election – touched on a handful of post-secondary related issues, including affordable tuition, a renewed $150-million commitment to the University of Manitoba’s Front and Centre campaign, and a promise for universal child care, which includes the creation of 12,000 new spaces and a boost to early childhood education.

The campus safety commitment, however, was the first to be backed up with a legislation announcement on Nov. 18 when James Allum, minister of education and advanced learning, unveiled a proposal requiring post-secondary institutions to draft and implement policies aimed at both preventing and responding to sexual violence and harassment.

The proposal would amend the Advanced Education Administration Act to require universities and colleges to consult students in the development of both preventive and responsive policies, inform students of the services and procedures in place, and produce annual public reports on the activities relating to the policies.

“It’s intended to be a student-centred initiative designed to, on the one hand, promote prevention and preventive practices, awareness, and education,” Allum said. “And then on the other end of the spectrum, in the event of a terrible incident, [ensure] that there are procedures and protocols in place to support the victimized student to ensure they get the help that they need and to ensure there’s a just and equitable process for the students.”

The proposed legislation allows for the development of regulations that will inform the content of the policies, set out guidelines for amending the policies, and determine the form and manner the annual reports will take.

Michael Barkman, chairperson of the Manitoba chapter of the Canadian Federation of Students, which lobbied for the legislation, said including students in drafting the policies and following up with public reports will ensure the proposals meet the needs of campuses across the province.

“We know students are on the front lines, they’ve been working on this issue and, also, they are the ones who are most often victims,” he said. “I think it’s really important student voices are being included.”

He said he is hopeful the implementation of robust policies will give victims enough comfort to bring the issue forward and report instances of sexual violence within school communities.

Students have “that fear of going to report and that fear of talking about gender- and sexual-based violence on campus because they just feel they won’t be listened to by administration,” Barkman said. “My hope is this legislation from the government is really going to change that.”

The University of Manitoba Students’ Union (UMSU) is involved in a campaign promoting consent culture on campus and the union’s womyn’s representative, Alana Robert, applauded the proposed changes.

“Knowing that if you have been victimized that your case will be taken seriously, and people do care, and these resources are available to you, I think [that] is one of the most important things that we as a university can facilitate and offer to students,” said Robert, who founded and leads the Justice for Women U of M campus advocacy group.

“We want to make sure that comprehensive reactive policies are in place,” she added, “but, at the same time, we want to be proactive about this and prevent it from continuing.”

The proposal follows in the footsteps of Nova Scotia and Ontario – provinces that each proposed similar legislation this year – and is part of Manitoba’s larger strategy to address sexual violence, which includes plans to become the first province to offer paid leave from work for victims of domestic violence, according to the government release.

Adopting language from the CFS playbook, the government declared in the throne speech that “post-secondary education shouldn’t be a debt sentence” and committed to keeping tuition fees at an affordable level and providing more “up-front services.”

While the address didn’t directly respond to a recent campaign promise by the Manitoba Liberals to convert provincial student loans into non-repayable grants – a policy the CFS has called for – Allum noted interest fees were struck from the provincial portion of student loans beginning this fall and pointed to a suite of grants, bursaries, and tuition rebate programs as evidence the government is committed to making post-secondary programs more accessible.

He criticized the Liberal plan – which would convert $10 million currently set aside in the provincial budget for recoupable student loans into post-secondary grants – saying it would only serve to increase the financial pressures on post-secondary institutions and put the current programs at risk.

“We have a very comprehensive package in place to ensure affordability [and] accessibility at our colleges and universities in Manitoba,” he said. “The Liberal leader comes out with this one little component on it but, I’m telling you, if you pull the string on her particular commitment, then some of the package that I just described – whether it’s low tuition or tuition rebate, or other grants and bursaries – is going to collapse and suddenly we’ll have a system that’s not working for students but in fact working against them.”

Barkman lauded a commitment from the speech to develop a universally accessible child care system, creating 12,000 spaces and expanding day care centres into new housing developments, as well as schools, colleges, and universities.

“That’s critical for so many students,” he said, noting the number of student-parents has skyrocketed in the last two decades.

“That’s a huge barrier – for student-parents to access affordable childcare that’s close to campus,” he said. “So when we open up childcare spaces on campus that are accessible for students and are affordable, they have an easier time in school.”

Allum said the expansion of the child care program fits into the government’s broader aim to increase access to higher education.

“I think that’s going to make a big difference, for sure, on a whole range of reasons,” said Allum. “That’s been our objective since we first came into government, was to ensure an affordable, accessible, quality post-secondary education system. When you put all the pieces together, that’s exactly what we have now and I think what the throne speech indicates is that we’re going to continue moving forward on a very progressive on-campus agenda.”

The throne speech also committed the government to completing the southwest leg of Winnipeg’s rapid transit corridor, connecting the U of M to downtown, and pledged support for a palliative care research chair at the school.