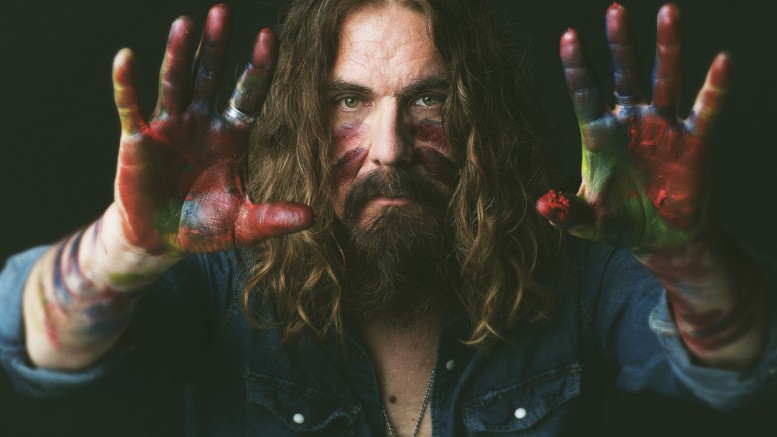 Beautiful Scars is a dense, impassioned album to be sure. Some songs are folksy, rootsy, and not led by much more than a picked acoustic guitar line and Wilson’s voice (“How Does It Feel,” “Come and Go”). Other songs are more sultry, bluesy numbers that feature a more varied instrumentation (“Loser Without Your Love,” “Hey Hey Hey”).

However, be they brighter or darker, folksy or bluesy, every track bears Wilson’s crooning baritone firmly in the foreground, singing impassioned lyrics of love and love lost.

“Loser Without Your Love” opens the album and showcases these aspects in exemplary form. The cynicism is softly stated, yet still palpable and biting when Wilson sings lines like “I’m still in love with the girl that you used to be, a little Jesus walking on your endless sea,” and the chorus refrain “I’m just a loser without your love, I guess.”

Wilson wasted no time expressing his fondness for Winnipeg to the Manitoban.

“I’ve done the Park Theatre, I’ve done the West End Cultural Centre, I performed there for the JUNO awards a couple years ago. I’m in and out of Winnipeg, it seems, all the time,” Wilson said.

“It’s the place that’s the most familiar to me and that I relate to more of a home than anywhere else in Canada. I’m from Hamilton, Ont. and whether Winnipeg likes it or not, we kind of consider ourselves Winnipeg South here.”

The varied but cohesive instrumentation presented on many of the songs from Beautiful Scars can be partially ascribed to the collaborative, selfless ethos Wilson has chosen to work under with each release.

Aside from Wilson, the musicians involved with LeE HARVeY OsMOND have changed over time. Wilson informed the Manitoban that he has produced each recording alongside Michael Timmins of Toronto-based alt-country group Cowboy Junkies.

“The idea of these recordings is to work with people who don’t want to show off when they’re playing music, y’know,” Wilson explained.

“There’s always somebody that wants to play more notes than the guy beside them, and those are the kind of people that we’re not interested in playing music with. We’re really interested in playing music with people that are sensitive to the material. The Cowboy Junkies’ first record The Trinity Session is an example or even a template to what we do. Also, Miles Davis’s Kind of Blue is a template to what we do. These are recordings where people executed the material without ego.”

Eschewing the idea of shooting a traditional music video for a song off Beautiful Scars, Wilson has partnered with filmmaker Jeth Weinrich to produce a trilogy of short films titled Where The Dirt Ends The Love Begins… that are set in Mexico and follow “the day-to-day-to-dust journey of love.”

This partnership marks the first collaboration of Weinrich and Wilson in 19 years. Back then, in 1996, the two worked together on a JUNO-winning music video for “Burned Out Car,” a song by Wilson’s old group Junkhouse.

“Jeth and I both share the idea that you’ve gotta lead with your art […] Lead with art and you’ll never go wrong, you will always be able to get in bed and go to sleep at night knowing that you’ve done the best job you can possibly do,” said Wilson.

Wilson has even been keeping busy outside of music. He just signed a book deal with Penguin Random House, and is in the midst of working on his first literary release, inspired in part by a recent personal discovery.

“I’m 56 right now, and I found out I was adopted three years ago and started to unravel that story, because, of course, I was the last to know about it,” Wilson explained.

“I grew up thinking I was an Irish guy my entire life, and it ends up that I’m actually a Mohawk guy […] I went on a radio show called Definitely Not the Opera and told a little bit about that story. From that I got offered a place on This American Life in the U.S., which I still have yet to do.”

“Then I got a call from Penguin Random House asking if I’d be interested in writing a book and I said fuck no, that seems like way too much work. But, here I am, writing a book,” he concluded, chuckling.

Wilson followed up the news by sharing inspiring, candid thoughts on art, life, and their overlap.

“If we keep our minds and our hearts open, we realize we have these beautiful works of art that we’ve created with our lives. I feel really blessed that people actually pay me to do that, to document my own work of art,” Wilson said.

“40s, 50s, 60s, you’ve created quite a body of work behind you, no matter what it is you’ve been doing with your life. I’m blessed that I’m able to sustain this lifestyle as an artist.”

Join LeE HARVeY OsMOND at the Park Theatre on Sunday, Nov. 8. Tickets are $29.50 plus fees in advance, and may be purchased online at www.ticketmaster.ca.

Essentially a playlist : How can we sleep when are beds are burning?

Rubbing shoulders with the upper crust