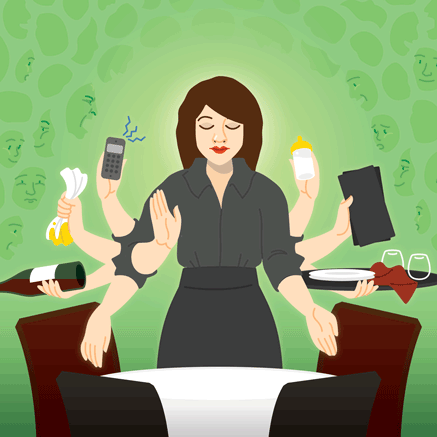 Some people look down on food service jobs. “I would never work in a restaurant” – a phrase I have heard many times in my life. As someone who has worked in restaurants since the age of 15, I feel it has been one of the most beneficial sources of learning I’ve had.

My journey into food service began in a family restaurant when I was in high school and simply wanted a way to make extra money. However early in my twenties when I made the transition into fine dining, it became more of what I consider to be my first career.

In my opinion, working in food service and hospitality has made me a more balanced person. It has taught me so many skills I never would have learned elsewhere. Here are some of the most important things I have learned in restaurant settings.

How to work on a diverse team

People work in restaurants for various reasons. Sometimes it is their career. Quite often, it is a job for while one is studying. For others, it is a second source of income.

The food service industry attracts a wide variety of people. I have worked on teams where the youngest employee was 15, and the oldest over 60. Some of them might not have finished high school, while others are completing their master’s.

Yet, despite where you come from or what your day job is, you all learn to work together as a team. You learn to communicate. And most likely, you all become friends in the process. Some of my closest friendships formed while working in restaurants.

This has translated into other areas of my life by making it easier for me to transition onto new teams. I’m used to a range of personalities. I can hold conversations on a variety of topics. And I understand many types of humour.

How to read people

Social intelligence is incredibly important in hospitality. In the age of Trip Advisor, OpenTable, and Yelp, any faux pas you commit could result in your name being smeared all over the Internet. And it can ruin special occasions for the guest.

Most importantly, your primary job working in a restaurant is to ensure that the guest has a positive experience. This can be completely different for every person who comes in. Some people want you to be very involved in their restaurant experience, recommending beverages or menu items, and being involved in their conversations. Some people want to barely notice you even exist. Sometimes people will not tell you that they are unhappy, and other times people will yell it in your face.

Most of the time you want to prevent the latter from happening, so you need to recognize signs that indicate whether a person is happy or unhappy.

In doing so, you truly become a reader of faces and body language. Head down, avoiding eye contact, arms crossed, and lots of silence? They could be displeased, but don’t want to make a fuss.

This helps in other areas in my life because it is much easier for me to read someone’s body language and emotions.

How to handle pressure

In hospitality we have a phrase for when we’re really overwhelmingly busy. We like to say that we’re “in the weeds.” I have no idea about the origins of this phrase, but every person who has worked in a restaurant has experienced it at least once.

We even have nightmares about it.

The host seats several new tables in your section, you have multiple drink orders to pick up, you haven’t put in orders for tables, and table 55 asked for ketchup 10 minutes ago. It is easy to become overwhelmed and disoriented with every request and task that comes up. Failure to keep up means unhappy guests, unhappy kitchen staff, and an unhappy manager.

No matter what industry you work in, you’re going to be under pressure at some point or another. You get a lot of practice trying to remain calm, professional, and organized while under pressure in a restaurant.

How to let it go

Not everyone learns this. But, to maintain your sanity in the restaurant industry, you don’t worry about the small things.

You don’t take insults or snide remarks from guests or colleagues personally. If your manager snaps at you, if the chef gets frustrated, if someone for a moment loses their cool, you let it go.

Restaurants can be some of the most stressful environments to work in. While the vast majority of guests I’ve served have been extremely pleasant, there are some that will take all their frustration out on you. While most of my colleagues have been great, I have seen some of them lose their cool, and then later begin the apology ceremony.

The only way to survive is to let it go and move on.

I feel like anyone who has never worked in hospitality is missing out on a lot of great experiences and lessons. This is why I would work in – and wish everyone would get a taste of working in – the food service industry.

Putting food on the Municipal plate