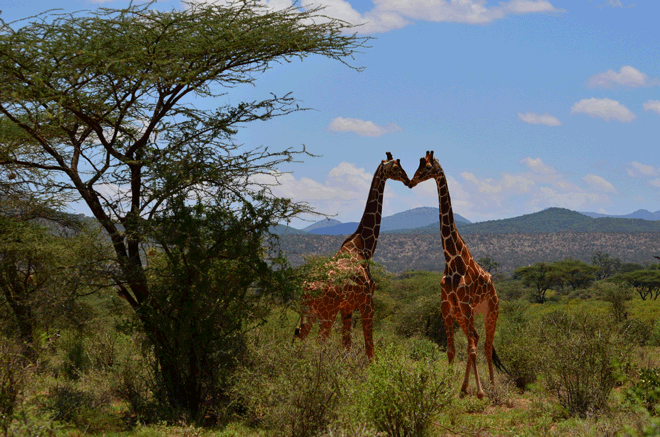 Canadian scientists are concerned with the rapid decline of the giraffe population in Africa. Stopping the threat of extinction has proven to be difficult since there is very little known about giraffes, so it has become a race to understand why they’re disappearing before they do so for good.

The race to save the creatures is chronicled in Giraffes: The Forgotten Giants, a featured documentary on David Suzuki’s televised series, The Nature of Things.

Suzuki, who narrates the show, claims that the sweetness and silliness of the stilted creature has prevented humans from developing a respect for the giraffe, which in turn has caused their population to be threatened. However, with new research, scientists are hoping that will change.

It is only now that the lack of research on the animals becomes extremely evident, since the ability to protect them is halted by the lack of knowledge about the creature.

Canadian researchers are at the top of the roster when it comes to studying giraffes and it all started with biologist Anne Innis Dagg in 1956.

As a Canadian female scientist trying to investigate a nearly untouched field of research, Dagg had an extensive amount of work ahead of her. After traveling to South Africa she began to conduct the first animal behavioural research on the continent.

With her guidance and her 1976 book The Giraffe: its Biology, Behaviour and Ecology, Dagg inspired other biologists to invest their time and effort into the creatures. For many of them she was a role model, and Irish biologist John Doherty called her “the Jane Goodall of giraffe research.”

The documentary features Doherty and wildlife biologist Zoe Muller on their quest to compile adequate information and field research in order to save the giraffe.

Co-producer Alison Reid had been working on a film about Dagg for a few years before approaching director and producer Mark Johnston with the project. Johnston decided that the expansion of the film to focus on the biological and conservational research on the giraffe was the right way to go.

“I started rewriting the treatment for the film with this in mind,” explained Johnston.

“[In] trying to research who was doing what in the field – since Anne had done her research – and fit Anne into the broader picture, I thought this approach would appeal to the audience which would tune into a film like this.”

Since the existing research was thin, the techniques to conduct the filming process were contrived in the field.

“Trying to get near enough to film giraffes is a heck of a challenge. They are notoriously shy animals,” said Johnston.

“While we were in Samburu National Reserve, we had to have a solution that could get us close enough to film the animals without them running away.”

Director of photography Russell Gienapp and local Samburu natives created foldable, leaf-covered platforms from materials that locals use to build their homes and perched them on top of their vehicles.

“The simple idea worked and the giraffes got used to having Russell film from the blind, and that’s how we got such wonderful close up, intimate material,” Johnston explained.

Doherty’s highlights of the filming process were the rare moments that he captured on the field.

“Filming a baby giraffe the morning after its birth was wonderful, as it stumbled on its new long legs,” recalled Johnston.

“Seeing some of the rare moments of behaviour is always special when you are camped out for weeks on end, hoping for something to happen in front of the cameras.”

The film was very informative and the passion behind the research was very evident throughout.

“I knew I had to make a film about them for a broad audience. To get people to understand the animals better, and perhaps motivate them to get involved in conservation efforts,” said Johnston.

Watch Giraffes: The Forgotten Giants online at www.cbc.ca/natureofthings and learn more about the project at www.reticulatedgiraffeproject.net.

Correction: An earlier version of this article mistakenly identified John Doherty as a Canadian biologist. He is in fact Irish.