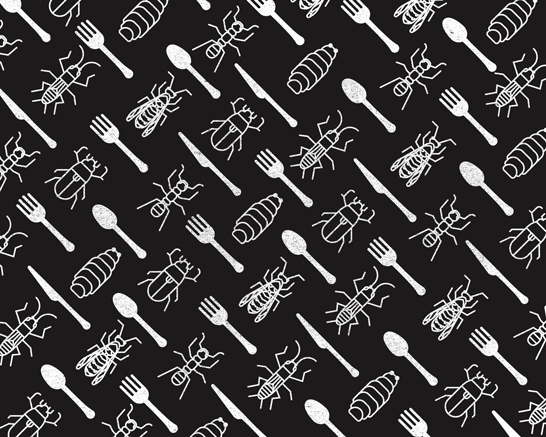 It’s common knowledge that human beings, especially those living in the industrialized world, have seriously impacted the Earth’s environment. We know that the cars we drive and the factories we build have harmful effects on the environment, but what about what we eat?

Some of the world’s greatest minds have worked to invent more sustainable options for the public to use, while other solutions have always been here, just waiting for the wider population to catch on. Whether it’s eating wrappers or wasp larvae, it’s time for us to rethink what we will and won’t put on our plate.

Edible packaging is one possible answer to reducing landfill waste.

Landfill sites currently account for 38 per cent of Canada’s methane emissions. In the U.S. alone, over 75 million tons of packaging waste found its way into landfills in 2010.

The packaging, produced by WikiFoods and created by bioengineer David Edwards, is built with a biodegradable membrane made with particles from natural foods like fruit and chocolate, and bound by calcium and sugar. The membrane can coat liquids, foams, and solids, and has the soft consistency of the skin of a grape. The skin can be flavorless, or flavored to complement the food it contains.

The commercially available version of the WikiPearl looks like a doughnut-hole and can be filled with ice cream or frozen coconut milk. A slightly more crude solution is being tested by KFC, of all places, in the form of an edible chocolate coffee cup.

While the concept of edible packaging seems like an obvious solution to landfill waste, there are issues holding back mainstream production. While the WikiPearls packaging itself can be eaten or thrown away, human squeamishness towards eating food that strangers have touched would most likely result in the WikiPearls being sold in containers.

This being said, WikiPearls can be washed in the same way you would wash fruit after buying it. It seems like the next barrier for innovators will be getting the public’s approval. While the complete upheaval of the way people package their food may seem daunting, it isn’t stopping Edwards. WikiPearls were named one of Time’s “Best Inventions of 2014,” and Edwards is currently working with the WikiFoods team to apply this packaging technique to other foods.

While the average Canadian might shudder at the idea of eating beetles or ants (also called entomophagy), the truth is that insects are a smart, sustainable alternative to mammal meat.

Livestock production accounts for about 18 per cent of the world’s greenhouse gas emissions. Beef is notoriously terrible for the environment, with some experts saying that reducing our consumption of red meat could be more beneficial to the environment than giving up cars.

Meanwhile, only some types of insects emit methane, and in much smaller amounts than livestock.

Another aspect of livestock production is land clearing, which is the practice of removing the natural plant life from an area and breaking up the soil, usually for the sake of agricultural production. Land clearing has already been directly linked to greenhouse gas emissions in Australia, where 6,878 square kilometres of native vegetation is cleared every year.

Insects are already regularly consumed all over the world by approximately 2 billion people in countries such as China and Brazil, where ants are considered healthy and delicious. They’re even nutritious – studies show that, gram for gram, grasshoppers are much less fatty and nearly as protein-packed as beef sirloin.

So why has snacking on bugs in North America never caught on?

People are influenced by the food culture of their environment and are unlikely to try new foods if they aren’t already commonplace.

It isn’t easy to promote insects as food in countries that haven’t already incorporated them into their diets due to something a United Nations report calls the “disgust factor.”

The report also calls on cooking workshops and restaurants to encourage and normalize entomophagy. Some restaurants are even answering, including the Danish restaurant Noma, led by chef René Redzepi, a recipient of two Michelin stars. Noma has served insects in the past, and has introduced a new insect dish to the menu this year: a live shrimp covered in ants served over ice.

The common barrier between these two innovative practices is public disapproval.

Unfortunately, the “disgust factor” has a history of endangering the environment and causing waste.

North Americans have proven themselves to be so wasteful that our cosmetic standards for food forces retailers to throw out fruits and vegetables because they are “ugly” – while this is happening, 4 million Canadians and 48.1 million Americans are considered food insecure.

We seem to be willing to let the negative consequences happen rather than change our minds. However, through slow public introduction, or perhaps eventual necessity, we might be looking at food in a whole new way sooner than you think.