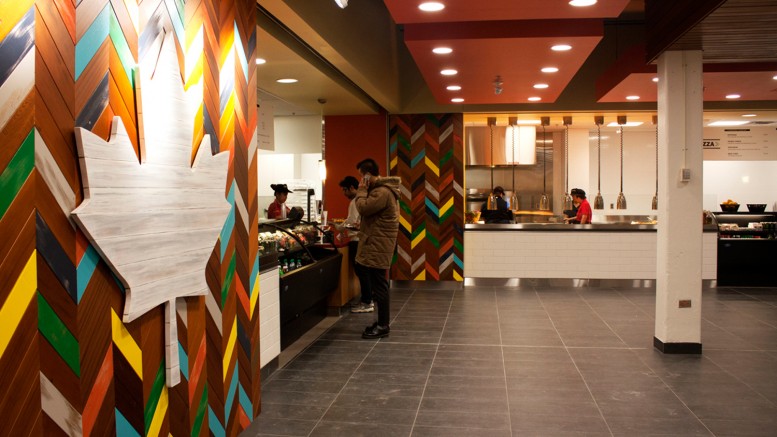 Many competing interests drive the food system at the University of Manitoba. Here the Manitoban attempts to break down some of the complexities of competing interests and concerns, barriers, and drivers of what has been called the “campus food revolution.”

For the Campus Food Strategy Group (CFSG) at the University of Manitoba, the food system on campus reflects the university’s culture, and the student experience is impacted by that food culture.

CFSG is a student-led initiative fostered by its co-coordinators, Michaela Bohunicky and Abigail Maniego.

“University students should be able to participate, voice their opinions, and have an active role in how their university food system operates and how it evolves and changes to suit everyone’s need, including theirs,” Bohunicky told the Manitoban.

“We strongly believe that the University of Manitoba has an immense capacity to house a safe, healthy, just, and sustainable food system.”

“Our second objective would be to involve students to have a meaningful role in that system,” Bohunicky added.

Bohunicky said that the main challenges facing her food strategy group were a lack of student awareness about food issues on campus, lack of connectivity across campus, the pull of food service providers, the physical isolation of the Fort Garry campus, and the need for the university administration’s support for initiatives.

“Universities tend to work in silos,” she said about the need for more inter-faculty studies and cross-campus partnerships, as well as more opportunities for students to work on U of M food projects. “The different efforts around food could always use more connection and collaboration.” Greenhouse at the U of M faculty of agricultural and food sciences building. Photo by Dana Hatherly

Various stakeholders in the university food system include students, the University of Manitoba Students Union, the U of M office of sustainability, university administration, food service providers, and faculty.

“Food service providers hold a huge stake, […] particularly the one that holds the monopoly, Aramark,” Bohunicky said. She expressed dissatisfaction with the decision-making process that led to the renewal of the contract between the U of M and Aramark, a large American corporation that provides food, custodial, and uniform services to schools, prisons, hospitals, and other institutions.

Back in 2012, CFSG conducted an informal campus survey, funded by anti-hunger nonprofit Meal Exchange, which showed students were unhappy with the food system. They wanted cheaper, healthier options.

After what the university called “an extensive best value [request for proposal] process,” the U of M signed a new 10-year contract with Aramark in 2014. As part of the contract, Aramark agreed to invest in renovations and new food outlets and to improve the nutritional value of their food.

When the university’s main food court in University Centre completed renovations in early 2015, there were no fast food options. There were, however, more diverse, healthier food choices set at prices comparable to what was previously offered.

However, Bohunicky remains critical of the new Aramark contract.

“The potential for change is limited in that 10 years, but that being said, I have a lot more to do to see how I can work with the current food service provider. Even beyond that, there’s a lot we can do in preparation for that contract expiry,” which, she said, might be their next big chance to move towards a more localized university food system.

For inspiration, Bohunicky pointed to the food revolution taking hold on other post-secondary campuses across the country – including at the neighbouring University of Winnipeg, where Diversity Food Services has transformed the campus by developing partnerships with the community, public, and private-sector organizations.

In what she described as her ideal campus food system, Bohunicky envisions “connections between foods grown on campus, processed on campus, sold on campus – connecting those different links in the food chain within the boundaries of the campus.” This hydroponic system, located in a greenhouse at the U of M faculty of agricultural and food sciences building, is in the early stages of an initiative to produce food on campus. Photo by Dana Hatherly

CFSG hosted the Food Challenge on Oct. 16-17, which was part of a pan-Canadian initiative that invited students to design innovative solutions for food security issues on university campuses.

Participants pitched their design proposals to win money and opportunities to carry out their project in the winter term. Experts were also in attendance to provide feedback and insight.

Five groups with five ideas were registered in the competition. One of the winning designs, a hydroponic initiative, has already been started on the U of M campus. This pioneering study uses water to grow greens without the use of soil.

Ian Hall, director of the U of M’s office of sustainability, said his office has looked at supporting food production on campus through gardening activities and matching campus food producers with buyers and consumers.

In Hall’s opinion, the University of Manitoba Students’ Union, with initiatives like their UMSU-run Degrees restaurant, leads the way in the sustainable food drive on campus by “supporting our food service partners to use food from Manitoba producers or that is sustainably certified, like organic or Fair Trade certified, and reducing food waste and its impacts.” Partnered with CFSG and other university community foodies, the office of sustainability works to draw awareness to food system issues facing the university.

“Other sustainability-related objectives at the University of Manitoba include food safety, providing food choices including vegan, vegetarian, and culturally appropriate options,” said Hall.

Their office also runs into problems in the process of cultivating a more sustainable food system.

“One of the biggest challenges that I have observed is that the food system is very large, complex, and at times seems invisible or disconnected from our day-to-day experience, in spite of the fact that we all eat,” Hall said about the main issues met by the sustainability office.

To address this challenge, they produced a report on what is produced, processed, served, consumed, and wasted on campus.

“The results have been used as the basis of community conversations about the current state and opportunities for change,” Hall said.

Out of these conversations have come the Food Challenge event and the creation of a new campus-wide food service committee that has sustainability as a central part of its mandate. Hall said his office arranged a partnership between the Daily Bread Cafe at St. John’s College and the Asper school of business marketing program, who brought forward their plan to implement the restaurant’s reusable take-out container program. With the use of stainless steel takeout containers, called tiffins, these food providers encourage students to return to their restaurant with the containers – clean or dirty – and get their meal served in clean ones. The office of sustainability also facilitated collaboration between the City of Winnipeg’s Brady Road Landfill and researchers studying compost at the National Centre for Livestock and the Environment located at the U of M’s Fort Garry campus.

“Looking forward, my office is hoping to partner with the Province of Manitoba’s waste reduction and pollution prevention program to conduct a waste audit that can be used to evaluate options for organic waste diversion at the Fort Garry campus.”

Annette Desmarais is an associate professor of sociology at the U of M, studying food sovereignty and agrarian change.

“Since ‘healthy, just, and sustainable food systems’ is one of the key themes of the University of Manitoba’s research plan (2015-2020), I thought that it was important to conduct some research on what is actually happening here at the University of Manitoba itself. That is, to take a look at what is happening in our own back yard,” Desmarais told the Manitoban in an email.

This led Desmarais to start up two research projects. Her work derives from a food sovereignty perspective coined by La Via Campesina – a line of theory that places the producers, distributors, and consumers of food at the helm of the food system and views food as more than just a commodity – who advocate for people’s needs to be the main proponents of food governance as part of more environmentally conscious, localized food systems. Fair trade coffee is served at locations across campus. Photo by Carolyne Kroeker

Desmarais and her research team are analyzing the extent to which the U of M and U of W source local and sustainable food and the decision-making processes behind food issues by looking to what is happening at other Canadian intuitions.

The U of M has also joined various other universities across Canada who are looking at food security among students on each of their campuses. Desmarais said the University of Saskatchewan, Acadia University, and schools in Ontario are among those who intend on putting out a survey for students in order to look at the degree to which they have safe and secure sources of food.

Desmarais said she hopes that her research takes a critical look at the extent of food security on campus and, by echoing the Province of Manitoba’s push for small-scale food production and processing, drives the local food economy.

More research on the menu

One University of Manitoba graduate has been looking at how much local and sustainable food is being purchased at Manitoba institutions such as hospitals, schools, and government institutions.

Leanne Dunne is the project coordinator for Manitoba on the Menu. It’s an initiative of Food Matters Manitoba, which is a registered charity “working toward food for everyone in the province, from teaching cooking skills, to helping communities grow their own food,” according to Dunne.

The University of Manitoba was one partaker in her study, which has two phases in total. The U of M was part of the first phase, which was to track local and sustainable food purchases.

“I tried to identify ways to understand how much food was being purchased by institutions, by the U of M,” Dunne said.

She categorized food purchases in terms of whether they were sourced in the province or not, although she said that this information – where product was produced and processed, and who owns it – is difficult to track.

Dunne found that about 18 per cent of the university’s food came from local sources.

“It isn’t terrible, but there’s certainly a lot of room to grow,” Dunne said, especially when compared to other Manitoba institutions. Local food purchases ranged from two to 60 per cent at other institutions under study, including Maples Personal Care Home, St. John’s-Ravenscourt School, a home economics class at Sisler High School, and the University of Winnipeg.

“The U of M is unique in that it’s the only institution that I worked with that had such an array of different types of vendors selling food. You know, you have the Daily Bread all the way up to Aramark. It was interesting to see how a post-secondary institution can have different purchasing models on one campus.”

Dunne’s work outlines certain obstacles facing post-secondary institutions in their quests for alternative food systems. Some barriers included the price of local or organic food, the timeframe involved with obtaining food from suppliers or producing from scratch, and restrictive food service contracts which limit where products can be bought from and the types of foods that are purchased.

Some of the recommendations coming out of the study push for food service contracts that include definitions of what local and sustainable means, having institutions setting goals and targets for increasing those purchases, and building relationships with small businesses to work toward more local purchasing opportunities.

Dunne said that universities should be leading the way, and students can be the drivers of change.

“Being a post-secondary community, you do have a community of people that can enforce or ask for change that might be less common elsewhere. Students have a lot of clout, a lot of power, because they’re the consumer at the end of the day.”