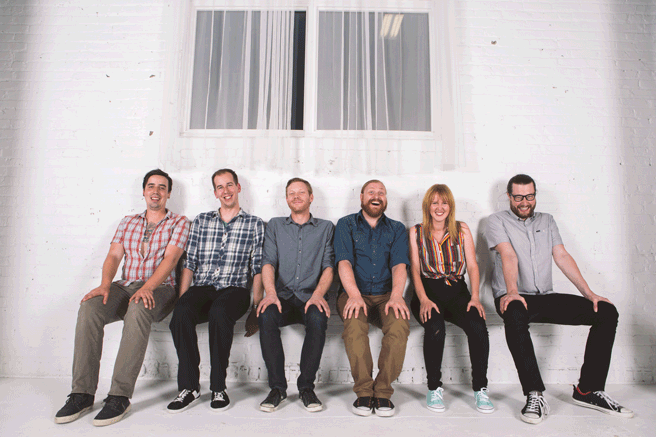 Sketch comedy group H.U.N.K.S. began performing in early 2015 and is set to perform their fifth original show on Nov. 19 at the Park Theatre.

H.U.N.K.S. is a troupe of five comedians and one filmmaker serving as the group’s director. These six talented Winnipeggers (Tim Gray, Quinn Greene, Sam McLean, Matt Nightingale, Dana Smith, and Rory Fallis) love sketch theatre and are very serious about it.

That being said, they could not care less about the meaning of their name. It is not an acronym despite being stylized as one.

“[H.U.N.K.S.] is like a great piece of art, everyone interprets it their own way,” Gray told the Manitoban.

“We wanted it to be big and ridiculous, but also not mean anything. We just wanted to remove the gender [denotation].”

Prior to the group’s formation, each member had been involved in some form of comedic entertainment; five of them were cast on Shaw TV’s recently completed mock news show, The Week Thus Far.

“We are just a bunch of similar comedic minds that have different sensibilities,” Gray said.

“Matt’s a standup comedian. Dana Smith and I came from theatre here at the U of M. Sam’s an improviser, […] Quinn’s an actor and writer.”

“Rory had a car and credit card,” Gray joked.

The group performs under the creative direction of Fallis, a filmmaker and writer. He highlights the sketch comedy segments he worked on for The Week Thus Far as part of his inspiration for the H.U.N.K.S.

The group booked themselves to have six shows in a year at the Park Theatre. So far, they have performed four and relish the challenge to maintain a high level of productivity.

“We have those deadlines. We know we have a show by [a set date] and we know that for months leading up,” Fallis told the Manitoban.

“It is the chemistry in the group too. We don’t have to force it; we didn’t know that going into it. We hoped for the best.”

“It’s kind of like learning how to fly by jumping out of the airplane,” Gray added.

The ideas, scripting, and directing of the show is a collective process. Each member tables their ideas and is involved in the writing process.

Besides their four previous shows at the Park Theatre, the troupe has performed at the Winnipeg Fringe Festival and Oddblock Comedy Festival. They have been encouraged by the reviews and attention they have received so far.

“We took the best of our first three shows and did it at the Fringe so it really helped to get us to a wider audience,” Fallis said.

“[The response has been] pretty cool. It keeps us going in the way of like, ‘well, it’s working and we just have to keep going.’”

H.U.N.K.S. have featured a number of other local sketch comedy groups like Hot Thespian Action and are set to work with Jump Shark and Bucko in their next show.

“We love doing shows with the people [we have worked with],” said Fallis.

“[These are people] we are lucky enough to be friends with, so we can showcase them as much as they are showcasing us.”

Their next original show at the Park Theatre promises a faithful adherence to established sketch comedy routines supplemented with a healthy dose of variety and nonsensicality.

“[People] can expect to see a brand-new show that really runs the spectrum of classical sketch comedy like you see on SNL […] and off-the-wall sketch comedy that makes no sense, but is just so fun,” said Gray.