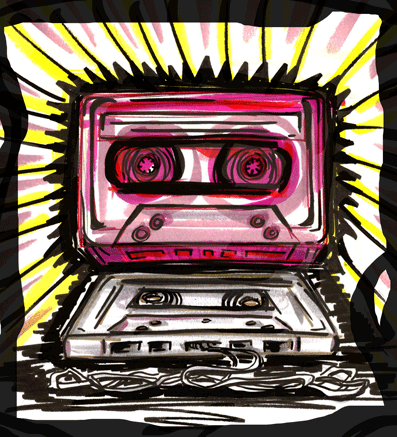 Nostalgia can be an extremely powerful motivator. If a significant object of one’s past is no longer widely available or relevant, then a sense of nostalgia will often amplify and create a great demand within a person to have that nostalgic object made available again.

Nostalgia has created a rather specific type of supply and demand in artistic fields. It probably played a significant part in Jurassic World being the highest-grossing film of 2015. It’s why the upcoming seventh Star Wars movie has every chance of blowing Jurassic World’s total out of the water in December. Nostalgia is also why American clothing retailer Urban Outfitters has begun producing cassette tapes.

It’s a pragmatic move. Record stores and cassette tape manufacturers alike have noticed a definite upswing in the demand for the old physical medium.

But does it really make sense? Movies based on old franchises are still new, and it would be utterly uncouth to reproach someone’s personal preference for the cassette tape.

However, from a strictly logical standpoint, to embrace cassette tapes as a mainstream medium is to take one confusing step backwards in the way music is released and produced in the present day.

First off, there’s the physical limitations of the medium itself. Tapes are encoded with an analog signal. Though tapes have been and are now produced by professional manufacturers to a very high degree of quality, the scientific fact is that, as an analog medium, tapes will always be more susceptible to noise (known to ears worldwide as the ubiquitous “tape hiss”) than digital encoding.

The word “digital” has a bit of a dirty synonymy with the less personal, the more computerized. This, again, simply doesn’t make sense. The same diversified technology company that spawned compact cassettes also had a hand in creating the technical specifications for compact disc digital audio – Philips.

The music you’ll hear digitally is lovingly crafted by an artist for your listening pleasure, just as it was when it was pressed on cassette or vinyl. As it is brilliantly said on MusicCritic’s electric beginners guide, music should be appreciated regardless of the physical medium it is produced on, thus this technological advance should be embraced as Philips enabling us to hear it a little clearer.

There are still many who stand by analog mediums as a superior way to appreciate music. This opinion is a subjective one, but should be respected nonetheless.

That’s why vinyl’s renaissance is a good thing.

A vinyl record retains the sound and slight hiss of an analog recording, which many enjoy. Unlike cassette tapes, however, vinyl allows a listener to easily select their favourite track from an album. Furthermore, vinyl can sport some aesthetically impressive packaging: large album inserts with lyrics and photos of the artists, a record that can be printed with a coloured or patterned face, and cover art you don’t have to squint to see. If you love owning physical media, then what better option is there?

Looking past the comparisons between digital and analog encoding, the only problem with vinyl is its portability. Vinyl is, for obvious reasons, completely infeasible as a portable music medium.

Thankfully, portable music has, for the vast majority, migrated to music players on smartphones and the iPod, Zune, or other portable music player. Digital music can be enjoyed at a very high audio quality and has the added benefit of doing away with the now-unnecessary production of the portable Walkman and CD players.

Even for the audiophile who cherishes the allegedly “warmer” sound of analog media, it just makes sense to enjoy them at home with a high-quality stereo system to highlight their defining features. Similarly, when you’re on the go and your listening has been relegated to earbuds or headphones anyway, it’s logical to go digital and use your phone or portable music player. You’ll forego having to lug around a Walkman or CD player, and won’t be helping create a demand to bring them back, because they simply don’t need to come back.

Once again, if you vehemently adhere to cassette tapes as your preferred medium, then that adherence should be respected. You occupy a niche market.

There’s nothing wrong with enjoying cassette tapes, but they ought to stay in that niche market. Cassette tapes crossing over into mainstream popularity in the modern age would be illogical and, when the added increased production of the Walkman is considered, rather wasteful.