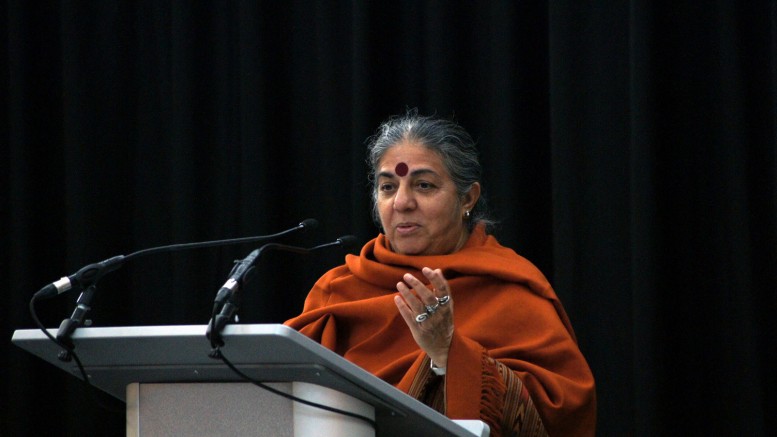 The push to see the University of Manitoba divest its holdings in carbon-burning industries was put into a global context on Oct. 8 when renowned environmental and social activist Vandana Shiva bridged the gap between climate change, industrial agriculture, and fossil fuel consumption in a wide-ranging speech at the university.

Shiva is the founder of the Navdanya, a network of seed keepers and organic producers across 18 Indian states. She is a staunch environmental activist and proponent of fair trade. Her numerous accolades include being named Time’s environmental hero in 2003 and one of the seven most powerful women on the globe by Forbes in 2015.

In an hour-long address to more than a hundred students, faculty, and community members gathered in the atrium of the engineering building at the U of M, Shiva explained how long-distance, industrialized agriculture is responsible for 40 per cent of the greenhouse gasses released into the atmosphere.

Coupled with the chemical fertilizers used in modern, mechanized farm production – which she referred to as pure fossil fuels – Shiva argued that “we are literally eating oil.”

“The climate problem is not just an energy problem […] It’s a food problem first and foremost,” she said.

As the first guest of this year’s University of Manitoba Students’ Union (UMSU) Speaker Series, Shiva spoke in support of the organization’s drive to pressure the U of M to divest its $64 million interest out of the oil, gas, and coal sectors.

Reliance on a false thesis that one region disproportionately affected by climate change-related drought and soil degradation can be aided by shipping agricultural products in from afar only serves to compound the greenhouse gas problem, said Shiva.

“Basically, what you have is a fossil fuel food system and it is destroying the capacity of the Earth to not just absorb the additional carbon dioxide but [it creates] new problems that we didn’t have before,” she said, explaining the whole cycle has a negative impact on once sustainable, self-sufficient communities.

“The most important part of that long-distance, globalized system of food is that instead of hundreds of thousands of people getting work in a healthy food system, you get five corporations dominating the system,” Shiva told the Manitoban following her presentation.

“Each community must be food secure,” she added. “Every bit of soil must be climate secure. And it’s these multiple levels of security, building from the bottom up, that will help us with reducing emissions and adapting to whatever momentum [there] already is.”

In order to reduce the current levels of carbon dioxide to 350 parts per million from its current level of 400 – which climate scientists argue is necessary to maintain a livable planet – Shiva said it will take more than a simple reduction in the burning of fossil fuels.

She argued poor land use policies, contributing to mass deforestation and industrial agriculture, have dismantled nature’s process for filtering carbon out of the air through “the most efficient solar system in the world – the green leaf in our plants.”

Refocusing on sustainable agriculture through recycling organic matter and increasing biodiversity will work to reverse the buildup of greenhouse gasses by rebuilding the filter, she said.

“A solar panel can reduce emissions but it cannot recycle carbon – that only living eco-systems can do,” Shiva said.

“We need to get rid of the dead, black carbon that is fossil fuels,” she added. “It should have stayed underground – that is where Mother Nature put it [and] that is where she intended it to be.”

While divesting the U of M’s stake out of the energy industry wouldn’t have an immediate, direct impact on fossil fuel consumption, Shiva said it’s incumbent on intellectual institutions to break free of the dominant, carbon-reliant mindset and chart a new course toward sustainable agriculture and energy.

“Fossil fuel is not just the substance that was fossilized underground, fossil fuel is a metaphor,” Shiva told the Manitoban.

“That’s why I talk about fossilized minds and, sadly, the fossil fuel domination is making universities retreat, go backwards.”

The UMSU push for divestment is essentially just getting underway, having only officially been adopted in a motion passed in the spring.

However, Shiva said connecting the union’s action as part of the global divestment movement can push momentum back in a productive direction.

“Course correction isn’t happening because continuing on the same path in the short term is paying off for a very, very tiny segment, while all the others bear the burdens of losing livelihoods, losing security, losing their very lives and homes,” she said.

Nasty or not, women deserve a place in politics