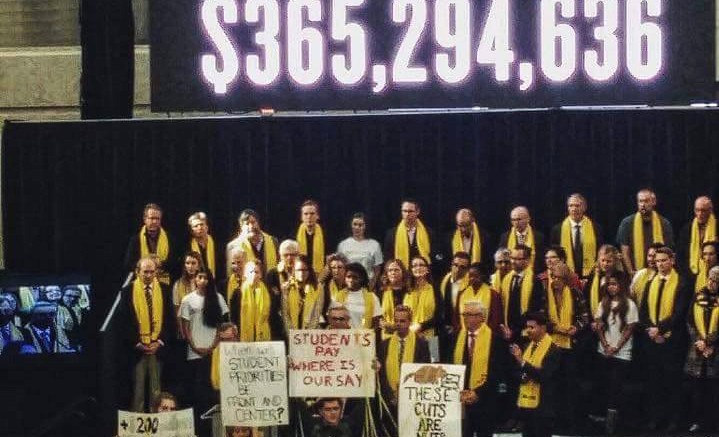 The University of Manitoba launched its $500 million Front and Centre fundraising campaign earlier this month to much fanfare, but some critics claim that private funding could undermine the public nature of the university in the long term.

The Front and Centre campaign will be a three-year journey to raise a staggering $500 million toward several of the university’s strategic goals.

While the campaign officially launched earlier this month, the $500 million goal was set in November 2014, with the university collecting donations over the last 11 months.

On Friday, Oct. 9, the government of Manitoba committed $150 million to the campaign, thereby bringing the total raised to $365,294,636.20 toward Front and Centre’s $500 million goal.
But despite a great start to the campaign, critics argue that an influx of private donations could endanger the public mission of the university.

Mark Hudson, president of the University of Manitoba Faculty Association (UMFA), told the Manitoban that the ongoing campaign places too much authority in the hands of private contributors.

“There has been this long-term historic pull back of public funding by both the federal and provincial governments that has left the university with little choice but to appeal to philanthropists in order to finance the university’s programs,” Hudson said.

“It leaves the future direction of the university essentially in the hands of those donors. They get to dictate what kind of project would be funded and that will have a huge impact on the overall direction of the university […] Our concern largely is with the determination of our future trajectory being put in the hands of a small group of donors.”

Hudson argues that there are other ways to generate necessary funds that do not involve a massive private fundraising effort.

“The alternatives are to engage in a long-term push to try and re-establish the priority of post-secondary education funding both provincially and federally,” he said.

“The responsibility of the university is to push and make a case that this should be a public priority. My proposed option will be to relaunch the conversation about getting both the federal and provincial governments more actively involved in funding post-secondary education.”

Michael Barkman, chairperson for the Canadian Federation of Students-Manitoba also said that a public university like the U of M should not rely on funding from private sources, stating that such funding sources are unstable.

“The money going into post-secondary institutions in Manitoba should be coming from public sources. We should not be relying on private sources,” he said, adding that public funding sources are generally reliable and stable over the long term in comparison with the kind of funding received from one-time fundraising campaigns.

Barkman said that a great deal of the new money will be going to capital projects at the U of M, “which does not help the overall accessibility and quality of post-secondary education.”

John Danakas, executive director of public affairs at the U of M, stressed the importance of the campaign, stating that it has five priority areas known as its “case for support” based on the real financial needs of the university.

“Those five priorities were established and identified by the university community, by staff, students, faculties, and leadership from the University of Manitoba; they identified those areas of need for support. For example, in indigenous achievement, funds are being sought to support the International Centre for Truth and Reconciliation. In graduate student support, most of the support being sought is for fellowships because that is what the graduate students identified as a need.”