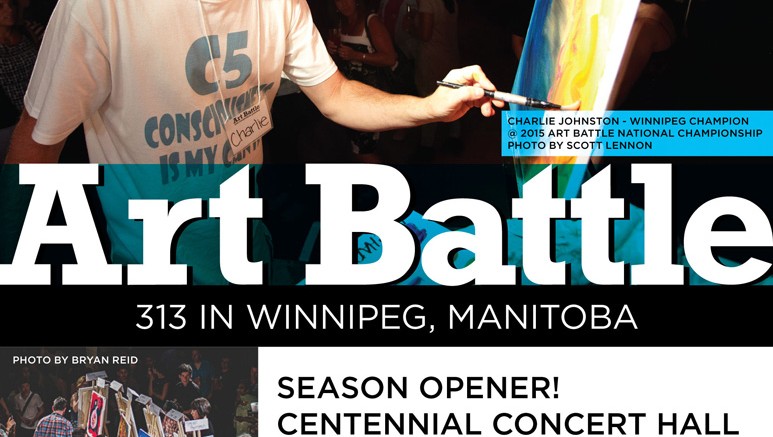 As artists, friends, family, and curious spectators arrived at the lobby of the Centennial Concert Hall on Oct. 9, six easels patiently awaited 20-minute masterpieces constructed by the paintbrushes of 12 talented locals for the Winnipeg Art Battle.

Simon Plashkes and Chris Pemberton created Art Battle in 2009 and since then it has grown in popularity. Winnipeg’s Art Battle event is one of many nationwide that seek to bring people together through art, regardless of their knowledge on the subject.

There are two rounds of painters that are given a white canvas, their choice of tools, paint, and exactly 20 minutes to transform their blank canvas to a masterpiece worthy of taking them to the final round for a chance to be crowned the Art Battle champion.

The competition encourages spectators to buy and support local by building a connection with the artist and works of art being created before them.

“As an artist myself, I know first-hand the struggle that comes with being a ‘starving artist.’ I felt that Art Battle was an opportunity to break that stereotype and promote fellow local artists and their talents so we become ‘surviving artists,’” said Kristi-Marie Chech, the organizer and host of Winnipeg Art Battle.

“I loved the concept behind Art Battle: bringing awareness to the art community by building relationships between people who may not know a lot about art and artists themselves […] By bringing this event to Winnipeg, my goal was to put Winnipeg and Manitoba artists on the map. Much to my surprise, I have had artists travel from outside our province to be a part of Winnipeg’s Art Battle.”

The first round of six artists took their places around their roped off easels at the centre of the room, brushes at the ready. Once the timer began, the painting commenced as spectators systematically circled the artists. Some of the artists outlined their paintings quite quickly while others took the slow and steady approach, revealing the subject of the painting in the final minutes.

The circling became less and less smooth as spectators’ steps were interrupted by beautiful landscapes, portraits, and abstract subjects that grasped their attention. Regardless of style and strategy, the crowd was kept on their toes as they watched beautiful works of art come together before their eyes.

After the paintings were completed, the spectators were asked to vote on their favourite as the next group prepared their tools to paint their competitive pieces.

The winners of the first round were Jola Liebzeit’s work, a woman painted on an abstract blue and green background, and second-time competitor Kelley Morrell with a fantastic rainbow-pastel Canadian landscape.

The voting was followed by a silent auction in which the works of art could be purchased by bid, with half the proceeds going to the artist: a rare and fantastic opportunity to own a piece of art that you watched being created before your eyes.

“I wanted to create a piece that someone would feel connected with enough to want to bid on,” said Liebzeit.

The second round, like the first, was a 20-minute painting round followed by a vote and auction.

The four winners faced off in a final round in which the artists were to produce a second painting to determine who would be the Winnipeg Art Battle champion.

Jola Liebzeit came out victorious with an intriguing and abstract female silhouette with many appealing components that snagged her the win.

“The second-round piece had a story and meaning for me and an element of whimsy that allowed me to enjoy the process even more. I wanted to create the best-quality piece I could given the 20-minute time frame challenge.”

The artists all seemed to be proud of their pieces and grateful for the experience at Art Battle regardless of the outcome. Art Battle meant much more than winning a title to the artists, spectators, and organizers.

“The nature of the interaction between artist and audience is unique,” said Morrell.

“Generally, artists work in seclusion and with a liberty of time to create and peruse. Under the pressure to create based on time while being observed, realizing that your work will later be voted on, is somewhat unnerving and that adds another unpredictable element to creating.”

“For the audience to be a part of that allows for a mutual respect and excitement that is unique in its experiential nature. Ultimately, I appreciate the aspect of the encounter of artist-in-process as entertainment, and the somewhat intimate interaction of the supporters with the artists.”

Chech believes that the effect Art Battle has on Winnipeg is contributing to our cultural scene in a positive way.

“Now in our second year, Winnipeg’s Art Battle has grown proving our province most definitely supports the awareness of fine arts and the talent of the artists competing. I feel Art Battle has made a significant contribution to this.”

“We as a province need to our support local artists and buy their local artwork. I want to help fellow artists have their talents recognized, regardless of winning the title as Winnipeg’s Art Battle champion. We have artists wanting to compete repeatedly for the love of the battle but mostly for their passion for art,” she added.

Twelve artists with very unique styles had the opportunity to share their work thanks to the Art Battle event.

After the first and second rounds, the third-round paintings already looked familiar and emulated the style you could attribute to the artist that you had watched create once before. The experience itself was a unique treat for any art lover, appreciator, or the curious.

The next Winnipeg Art Battle will take place in spring of 2016. For more information visit www.artbattle.ca or www.facebook.com/artbattlecanada