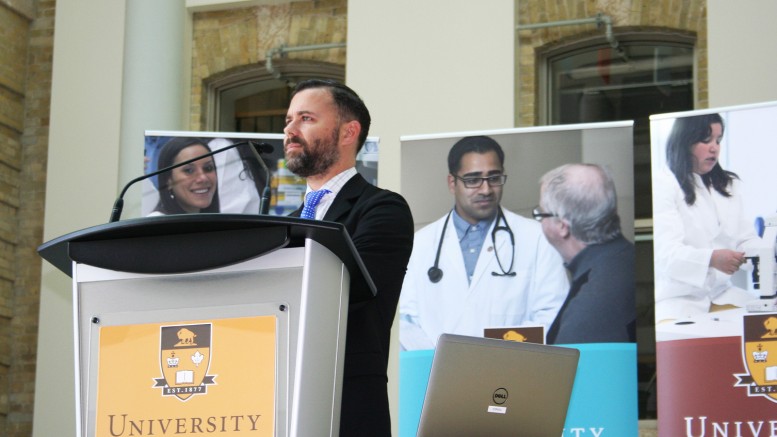 The University of Manitoba welcomed medical lawyer Jonathan Cohen on Oct. 2 to deliver the annual Class of 1972 Arnold Naimark Lecture in Medicine and Society, for the faculty of health sciences at the Bannatyne campus.

Cohen works as the acting director of the public health program at Open Society Foundations, a global organization dedicated to human rights-based advocacy on a variety of health issues.
His lecture explored the link between medicine and human rights, arguing that the legal system has a role in augmenting the health care system for the overall improvement of public health.

“Most of the organizations that invest in public health programs tend to focus on technology or magical bullet solutions to public health problems, like there is this great device that can do this and that. But our argument is that public and population health will never be accomplished until you look at the world you live in, the social status of the people you are trying to help, and the quality of governance that surrounds and affects public health,” Cohen told the Manitoban. Cohen cited many examples of human rights violations in the realm of health care.

The Holocaust, for example, relied on medical professionals after Hitler introduced a euthanasia program in which doctors were instructed to kill those deemed unacceptable. Human rights violations continued in apartheid South Africa, where doctors helped to enforce a health care system built on racial discrimination.

While these examples seem antiquated and are typically used as a measure of how far we have come as a society, Cohen heavily referred to a recent example throughout his lecture – the Ebola outbreak of last year.

Ebola, a virus causing a rare and deadly hemorrhagic fever, killed over 11,000 people in 2014.

Previously, the World Health Organization (WHO) had recorded a total of 29 outbreaks of Ebola in human history, resulting in fewer than 2,000 deaths.

The first case was eventually discovered to be a one-year-old child who lived in Guinea, who contracted the virus in December 2013, but was not diagnosed as having Ebola until March 2014 – providing ample opportunity for the virus to spread. Less than a year later, over 6,500 cases were confirmed in four different countries.

According to the WHO, the Ebola outbreak in West Africa was the most severe acute public health emergency seen in modern times.

“I think what was striking about this epidemic was not just how it was experienced in West Africa, but how it was experienced in the rest of the world. Many will remember the major international headlines that exploded last summer as a result not only of increasing pleas for help from humanitarian agencies such as Doctors Without Borders, but also because of the threat and the fear of Ebola spreading globally,” Cohen said.

The widespread fear of Ebola had cataclysmic effects, Cohen said. Epidemics cause fear, panic, and hysteria, especially when exacerbated by the media, which leads to violent acts of discrimination against those who are infected or suspected to have contracted the virus.

“There’s actually a less obvious, and in my view much deeper and more profound link between medicine and public health [that] epidemics like Ebola raise. It has to do with the human rights of health workers, and in this case the rights of doctors and nurses who are expected under much duress to provide treatment and care to people who are living with potentially fatal diseases,” Cohen said.

For example, in Sierra Leone in 2010 – just before the Ebola outbreak – approximately 50 per cent of health care workers were not receiving a salary, according to Cohen’s lecture. As a function of this systemic flaw, the American Central Intelligence Agency and the WHO report that Sierra Leone had 0.02 doctors per 1,000 people, while Liberia maintained 0.65 physicians per 10,000 people.

According to Cohen, this shortage of public health services was exacerbated by the fact that many African countries affected by the Ebola outbreak were in the process of paying back International Monetary Fund (IMF) loans.

“When Ebola began, Guinea, Liberia, and Sierra Leone were all receiving loans from the IMF. Conditions on these loans required countries to prioritize repaying their debt and their interest payments over funding critical social and health services. Ebola-affected countries had to limit not only the number of health workers they were able to hire, but they also had to cap wages to a pitifully low level to meet broader IMF policy directives,” Cohen said.

When Ebola hit – in order to relieve the extreme shortage of health care workers in West Africa, very few of whom have the training necessary to treat biosafety level four pathogens – these countries appealed to nations like Canada, who have such expertise.

Rather than sending technical support, such as doctors and nurses with the correct training needed to treat Ebola safely and effectively, these countries responded slowly and inadequately, which only made it more difficult for those in need to access the staff and supplies they required, Cohen said.

“As a result, doctors and nurses in the affected countries, already underpaid, in short supply, and already vulnerable to Ebola themselves, were literally told to go and manage, try to treat patients without personal protective equipment in facilities without proper infection control,” he added.

As a result, the virus spiraled out of control and continued to spread, infecting and killing many medical workers. This resulted in military forces blockading and forcibly quarantining many Liberians regardless of whether they demonstrated any symptoms of Ebola.

Security services treated individuals thought to be infected as criminals, creating a deep stigmatization that served to worsen the epidemic. The effort to find “hidden” patients actually coaxed symptomatic individuals further into hiding and constructed a deep culture of fear and panic surrounding Ebola, Cohen said.

“My goal is to point out that harmful and ineffective health measures do not come out of nowhere,” he added.

“Quarantine does not begin with the military. Had there been sufficient health workers in these countries, had these workers been able to do their job, had they been paid, had they had access to personal protective gear, had wealthy nations sent technical assistance and staff and not just written a cheque and sealed their borders, such blunt and ineffective measures may never had been needed.”

The Ebola outbreak, and arguably the whole field of medicine, provides one of the most compelling examples of the interdependence of rights, according to Cohen.

In the Ebola epidemic, denying the right to health also denied the right to liberty. By neglecting the health system, West African governments eventually had no choice but to enforce a mass quarantine, leading to extreme violence and even death.