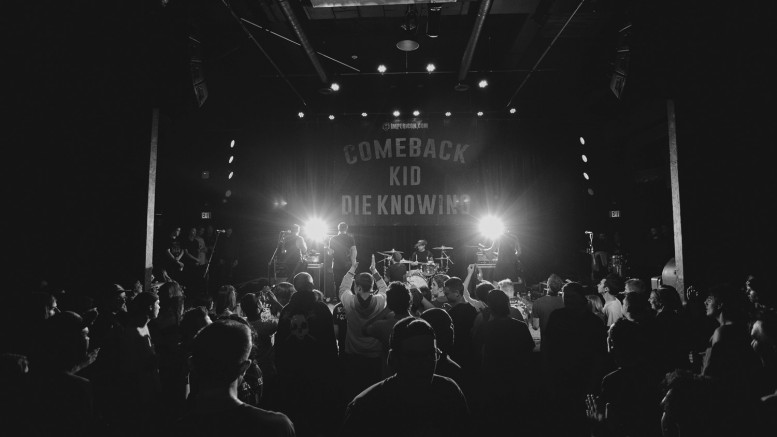 The Park Theatre is a very well-known and cherished venue in Winnipeg where arts and entertainment are recognized and celebrated all year round.

The old-school movie theatre façade with flashing lights begging you to notice the weekend line-up is just as enticing as the crowd of showgoers below. They range from Rocky Horror Picture Show attendees in tights to toqued teenagers awaiting an awe-inspiring performance for only 10 bucks. If you bow to common sense, you will find yourself in the beautifully renovated Park Theatre.

The venue screams “Winnipeg” from the welcoming, friendly bartenders serving Standard lagers non-stop in the lobby to the theatre itself. Inside, you’ll feel like it’s a crime to be so close to the talent until they hop off the stage after their performance and humbly accept your praise and ask your name. The sense of community is contagious and you always leave feeling like you were a part of something special.

This weekend marks the 10th anniversary of the Park and many local favourites are honouring the venue with four days of talent-filled shows from Oct. 1-4.

Promotions and talent buyer Kevin Mozden wanted to showcase all the unique talent they have to offer.

“No two nights will be alike. We have really booked something for every musical taste this weekend,” he said.

The Park Theatre wasn’t always the venue we know and love today. Owner Erick Casselman made thorough renovations to get the establishment in working condition.

“It had literally sat empty for almost 25 years. The electrical, the heating, cooling, the roof, plumbing – there was nothing that wasn’t rebuilt or replaced,” said Casselman.

Starting off as a humble coffee shop with DVD rentals, after a while the stage began to be used for performances. Investments in the PA system and lighting then created a perfect venue to produce a variety of shows.

Over the past 10 years, the Park Theatre has hosted a number of great acts.

“There have been so many amazing nights and great memories in this room, every night stands out as a highlight,” said Casselman.

“If I could be so bold to pick a few, it would be JP Hoe recording his live beta project here, the night Imaginary Cities and Royal Canoe played the same show back-to-back, back-to-back sold-out nights with Said the Whale, the Strumbellas show with the entire room singing along, Jen Kirkman’s night of comedy, and Hannibal Burress.”

Mozden had some highlights as well. One was “when Mac DeMarco – playing to a sold-out crowd in June of 2014 – crowd-surfed all the way from the stage to the bar at the back of the room, ordered a drink, then was carried all the way back to the stage by the crowd.”

“The other was when Alvvays played here and lead singer Molly Rankin finished their show by jumping into the crowd and having them carry her all the way out of the venue, into the lobby and to the merch area.”

“Random, silly things like that are always great to see and they are things that people will always remember.”

The sense of creating those moments for the audience and performers is evident to those who hold the Park Theatre dear. Romi Mayes, local musician and Sunday night feature in the anniversary show series, describes the venue as “monumental in the constant development and maintenance of the reputable thriving arts scene in Winnipeg” and calls it “one of [her] favourite places to perform and to see performances.”

Headliner of the Sunday night show Scott Nolan described the Park Theatre as “an anchor for the whole neighbourhood.”

“I think the Park Theatre accommodating this is the neighbourly thing to do. I really like playing that room,” said Sawatzky.

The Park Theatre’s role has changed during the lives of many, including local musician Kieran West, who originally attended shows there as a teenager.

“Those artists and those shows are what inspired me and showed me that I could be doing the same thing,” West told the Manitoban.

West has now gone on to play shows solo and as the lead singer of Kieran West and his Buffalo Band in events such as the Park Theatre’s former concert series Heartworn Highways and as an opener for Western Canadian Music Award winner Del Barber. West has also earned himself a slot in the Sunday night anniversary showcase alongside local folk/country artist Richard Inman.

So what makes the Park Theatre stand out to locals in such a positive way?

“I think one of the things that is so unique is just the diversity of our programming here,” said Mozden.

“We are welcoming to pretty much anything. We have hosted events for nearly every genre of music thinkable on top of doing comedy events, film screenings, poetry readings, plays, and much more. We’ve hosted birthday parties for children, retirement gatherings, socials, and weddings. The room looks great and really lends itself well to just about any kind of event you can think of.”

Casselman and his team make the Park Theatre accessible to a variety of talent and he doesn’t plan to slow down anytime soon.

“We have a lot in store for Winnipeg, and are looking forward to another 10 years and more with this amazing city.”