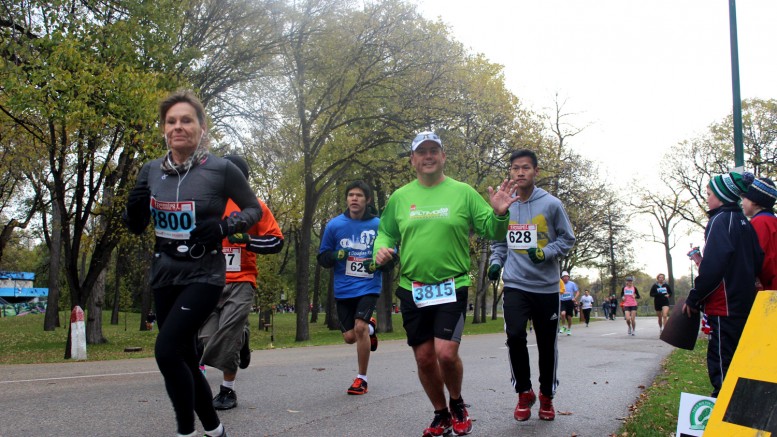 Ted Swain was a well-known and respected face in the running community until his untimely passing in May of 2009 following the Winnipeg Police Service half-marathon. He became very involved in the recreational running scene after his retirement from Vincent Massey Collegiate, where he taught English.

Swain would run his first full marathon in 2004, which was also the year he began coaching running clinics at the Running Room. His love and passion for the sport led him to coach an outstanding 19 clinics in a span of five years – something both he and his clinic members found great joy in.

When Swain suffered a heart attack after completing the race, a huge void was felt by those in the running scene.

One evening, shortly following Swain’s passing, a group of about 100 runners gathered at the Kenaston Running Room. A small race was held to honour Swain, and a sizable amount of cash was collected. Swain’s wife Joan used the money to start a foundation in Ted’s name through the Winnipeg Foundation.

A few weeks later, Kenaston Running Room manager Lorraine Walton approached Michael Bennett, a dedicated runner and friend of Ted’s, and asked if he would consider taking on the race director position if there was enough interest in organizing a second race.

“Several meetings followed, and the interest was there for a second event, so I accepted the race director position,” Bennett said.

“We had no idea what we were doing, or how to organize an event, but the committee was very strong and dedicated to making it work. Fast-forward to September 2015 and we’re still around, stronger than ever.”

Sept. 27 will see the fifth instalment of the event known as Ted’s Run for Literacy (TRL). It’s an event that honours Swain’s legacy in a few different ways.

“Our race crew is very motivated. We are one of the few races, perhaps the only one, that is organized by runners, for runners, to honour a runner,” Bennett said.

The event does more than simply honour Swain’s lasting impact on many in the running community, however. It also links with his background as an English teacher.

“Our vision is to eradicate the cycle of childhood poverty. It’s a dream, an audacious dream, even, but we’re not afraid to tackle this issue head-on,” Bennett said. “We believe that through education, particularly literacy education, we can make a difference. To date we have generated about $26,000 towards this end. We are, indeed, the little race that could.”

This year, the proceeds of TRL will go to support CanU, a local after-school program created in 2010. Its goal is to inspire hope and confidence in Winnipeg children who may not have the same access to post-secondary education as others living above the poverty line.

CanU provides multi-week programming and is hosted by partnering faculties at the University of Manitoba.

“Programs are 14-18 weeks long during the academic school year, and are designed and delivered by university student volunteer coordinators and instructors, who teach the children literacy and life skills in a variety of sports and academic programs,” said Roger Berrington, the current executive director of CanU.

“These programs are designed not only to provide Winnipeg children and youth with experiences that will instil hope and confidence in their ability to achieve post-secondary success, but also provides university [and] college students with leadership skills in their chosen field in the context of a cross-cultural, cross-social and cross-economic setting.”

Interestingly, Berrington has also been volunteering with TRL since its inception, connecting the run with an opportunity to make a difference in the lives of Manitoba kids by using some of the funds to provide running shoes to kids.

“Last year, Ted’s Run asked the Winnipeg Foundation for a recommendation of an organization that serves kids in literacy and sport,” Berrington said. “One of the organizations they recommended was CanU. It was kind of cool and humorous how TRL chose CanU.”

By partnering with CanU, TRL is continuing its goal of fostering education in an inspiring way. It’s a mutually beneficial relationship, and something that Swain would likely be proud to see.

“It’s no secret that education is the key to success, the key to opening the vault of poverty,” Bennett said. “To not try to open the door is shameful. Ted was a teacher and he would be proud of his legacy.”