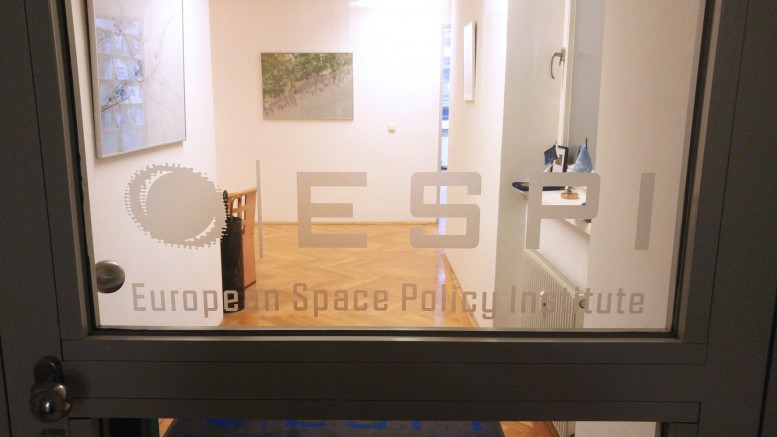 The European Space Policy Institute (ESPI) is a think tank organization for space policy, established by the European Space Agency Council and the Austrian Research Promotion Agency in 2002. ESPI’s purpose is to provide advisory services to European policy-makers on issues relating to the space sector and to create awareness of developing space technologies and their applications.

The head office of the Space Generation Advisory Council (SGAC), the organization I am interning with, is in the same building as ESPI’s. While they are completely separate organizations, many of their goals overlap, such as generating awareness of space policy and being a catalyst for global co-operation.

I was lucky to start my internship on the same day as the beginning of ESPI’s 9th annual autumn conference. This year’s theme was “Access to Space and the Evolution of Space Activities,” and the two-day conference featured speakers from Austria, France, Germany, the Netherlands, China, and the U.S. The speakers came from a mix of academic and industry backgrounds.

The crowd was a combination of older professionals, young professionals, and students. Many of the delegates I spoke to had backgrounds in policy, law, government, and international relations, with some engineers in the mix. I even met one philosopher.

While every presentation was interesting, a few that stood out to me were the ones given by CNES director of launchers Jean-Marc Astorg, Virgin Galactic’s vice-president of business development and governmental affairs Richard DalBello, and James Schwartz, assistant professor from Wichita State University.

Astorg discussed new Ariane rocket design concepts and how reusability is becoming a more economical option. The presentation had a systems engineering approach, with details on how reusability of certain stages of the rocket impacted costs, the emerging demand for small satellite launchers, and the CNES’s goal of reducing launch costs to 10,000 euros per kilogram by 2020.

DalBello made the interesting comment that only 551 people have ever been to space, touched on the SpaceShipTwo accident (which killed one pilot and injured another) and how the company has responded in overcoming the tragedy, and talked about Virgin Galactic’s LauncherOne – a planned launch vehicle for small satellites.

Schwartz went into the ethics of resource exploitation of celestial objects using the International Telecommunication Union’s system for managing radio frequencies and orbits as a model. He believed that a regulating body should ensure that these resources are not used in a way that is trivial or frivolous. Additionally, to guarantee that using resources has a positive social and economic impact and that all nations have equal access to them, a committee should be established to oversee near-Earth resource exploitation.

During one of the breaks I had the opportunity to be part of a discussion with DalBello about space traffic management and how it could potentially be regulated. One recurring sentiment that I have encountered over the last year-and-a-half since I started attending space conferences was that space debris and managing orbital traffic is an issue that needs to be addressed.

One reason for this is that the rising popularity and accessibility of the cubesat platform has meant that a lot more small satellites are making their way to orbit, and not all of them are being tracked or have de-orbiting capabilities. The cubesat platform is being used widely in academic and commercial settings, and gaining popularity due to their relatively low cost and short build-time.

There have already been incidences in the recent past of inactive satellites colliding with other satellites, creating space debris. If this happens too often, there could be a day where certain orbits become unusable. With increasing numbers of satellites in low Earth orbit, collisions could potentially begin to happen more often.

The U of M’s Space Applications and Technology Society has considered this issue before, and is currently working on solutions so that if our nano-satellite is launched, it doesn’t remain in orbit for an excessive amount of time after its useful lifespan ends.

Overall, the ESPI autumn conference was a very exciting introduction to life in the SGAC office.