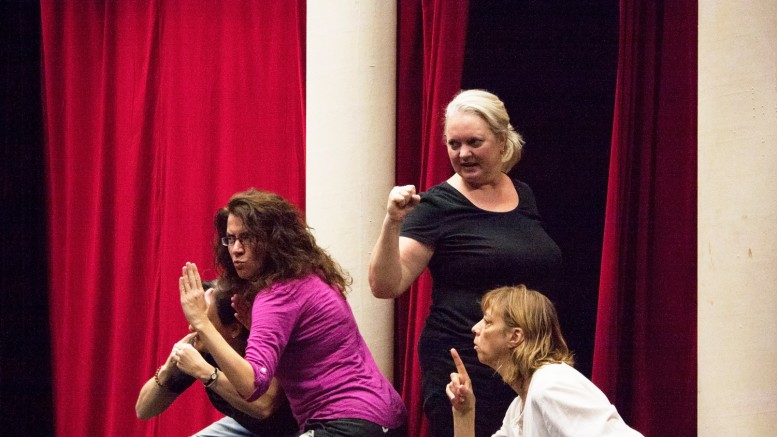 The Black Hole Theatre Company (BHTC) is staging a production of Lysistrata, Aristophanes’s famous comedy of sex and war, to raise funds for the construction of the new Conklin Theatre at the University of Manitoba.

The production, which involves students, faculty, and alumni from the U of M’s theatre program, is from a newly adapted script by five U of M alumni and features music by Juno winner Gerry Atwell.

“It’s one of the greatest anti-war plays ever written, and it’s 2500 years old,” said Chris Johnson, the show’s director and a professor in the department of English, film, and theatre. “It’s probably the most accessible of the ancient Greek comedies. The jokes still work – penis jokes galore. And its message is pretty good: women have the power to stop war.”

The titular character of the play is a woman who convinces an assembly of Greek women to withhold sex from their husbands until they end the Peloponnesian War. The lead role is played by Stephanie Moroz, a U of M theatre graduate from the class of 2009. Moroz is currently pursuing theatre in Vancouver, where she studied at the Studio 58 theatre school.

“This is one of those really strong female characters that you kind of know about for a long time,” said Moroz. “Getting a chance to play a woman like this who’s comedic and interesting and smart and ambitious and all sorts of great characteristics – it’s a very exciting role to play as a woman.”

Since the production features U of M alumni – some from as far back as the 1970s – one of the factors in choosing to put on Lysistrata is that it has room for a large cast consisting of several generations of U of M theatre grads.

Another reason is that, although the BHTC rarely repeats plays that they have performed, they mounted a production of Lysistrata in 1981, also directed by Johnson. Three actors from that production are returning for this new version of the show.

One of these three is Jim Macgregor, a film and theatre graduate who now works as a producer and director for Shaw TV. Macgregor played the male chorus leader in 1981, but is doing the smaller role of the misogynistic Spartan ambassador for the new production.

“It’s been a bit of a stretch for me to sort of get my mind around that, and the kinds of things that I’m hearing coming out of my mouth, which is interesting,” said Macgregor.

In addition to raising funds, the production is meant to give U of M alumni one last chance to perform in the theatre they remember before the company moves to its new space.

The construction of the Conklin Theatre is part of the long-running Taché Arts Project, which will see the U of M’s fine arts and performing arts programs move into a complex centred on the former Taché Hall residence.

With funding from a donation by the family of U of M alumnus and theatre critic John James Conklin, construction of the theatre is currently underway in the space that used to be the Taché Auditorium. But the BHTC still needs additional money for the completion of the project.

The Conklin Theatre will feature a better public-facing entrance, modular seating, a traditional proscenium stage, and a higher ceiling allowing for proper lighting and set design. The current Black Hole Theatre space will continue to be used as a rehearsal hall.

The Black Hole Theatre Company’s production of Aristophanes’s Lysistrata runs from Sept. 28 to Oct. 3 at 8 p.m. (8:30 on Oct. 3) at the Black Hole Theatre in the lower level of University College. Tickets are $50 and a charitable tax receipt will be issued for a portion of the ticket price.

Correction: An earlier version of this article, as well as the print edition, incorrectly reported the performance dates and times. The article had been amended to reflect the actual dates and times. We regret the error.