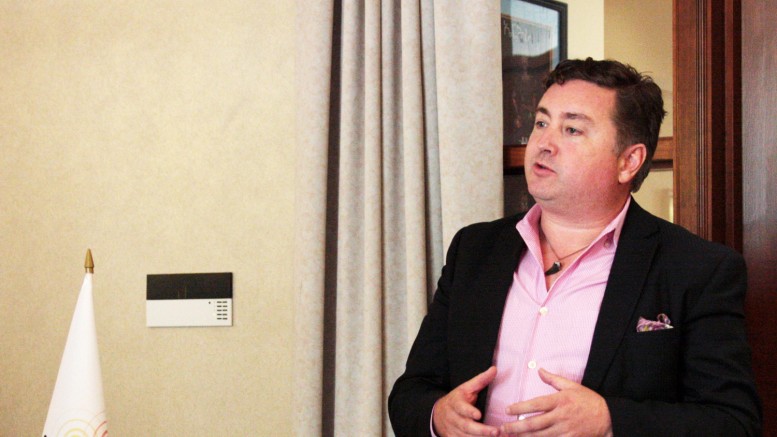 Exploring the word “forgiveness” brings up strong emotions, and this was no more obvious than during an event hosted by the Arthur V. Mauro Brown Bag Lecture Series at St. Paul’s College last Friday, Sept. 18, titled “The F word: stories of forgiveness.”

The event featured Samantha Lawler, a woman who forgave her father over a decade after he raped and murdered her mother, and Tony McAleer, a former white supremacist who has struggled to move away from his past.

The event was presented as a part of a series of exhibitions from the Forgiveness Project, a secular organization which first held “F word” exhibits in London in 2004.

The exhibit has been held in over 550 venues worldwide and combines vivid images and personal narratives. Using storytelling as a form of education, the exhibits seek to start discussions about forgiveness and compassion.

For Lawler and McAleer, embracing “the F word” has also led to an opportunity – the opportunity to let go of bitterness and feel at peace.

“I am acknowledging the shared humanity that we all have, and that is what is understandable and acceptable,” Lawler said.

At 18, Lawler experienced the loss of her mother, who was raped and murdered by her father. Her father was given a life sentence without parole after pleading guilty to first-degree murder, leaving her without both parents.

For the next 13 years the grief and anger were overwhelming. She continued to live her life but there remained a part of her that had lost faith in the world.

It was not until choosing to visit her father in jail, just as he was about to die, that this cloud was lifted.

She was given 10 minutes to speak with her father, although he was so ill that he could not speak himself. Here she forgave him and told him that she loved him.

In those 10 minutes she also knew that she wanted to share her story with a broader audience, which is what brought her to St. Paul’s College last week.

“In that moment I was set free from this weight that had been on me for 13 years. That was the moment that I felt that there was something to this human connection, love thing,” she said.

For Lawler, forgiving her father did not mean accepting what he did as morally correct. Instead it meant recognizing the human emotions that led him to such a terrible crime.

“We are all people figuring out life as we go along, capable of making mistakes,” Lawler said.

Tony McAleer’s story also involves forgiveness. But his greatest challenge was not forgiving others, it was forgiving himself.

McAleer was once involved with far-right extremist groups such as the White Aryan Resistance. He was a propagandist for several racist causes, spreading messages of hate and participating in violence against others.

The turning point for him was the birth of his daughter. For the first time, he felt truly connected to another human being.

This new child showed him how disconnected he had been. It was then that he slowly began to change his life.

McAleer is now a motivational speaker and the executive director of Life After Hate, a non-profit organization that offers support and services for those wanting to leave extremist groups and make a new life for themselves.

Choosing forgiveness and compassion has been an integral part of his journey up to this point.

“What I have learned is that the more that I have compassion and forgiveness for myself, the more I can diminish my capacity to do harm in the world,” he said.

Bonface Beti, a master’s student at the Arthur V. Mauro Centre for Peace and Justice at St. Paul’s College, attended the presentation.

“I come from a background of using stories and theatre for healing. Presentations like this are powerful tools for healing. It affords people the opportunity to journey and break cycles of violence,” Beti told the Manitoban.

This event was part of Peace Days in Winnipeg, a week-long festival leading up to the Sept. 21 United Nations International Day of Peace.