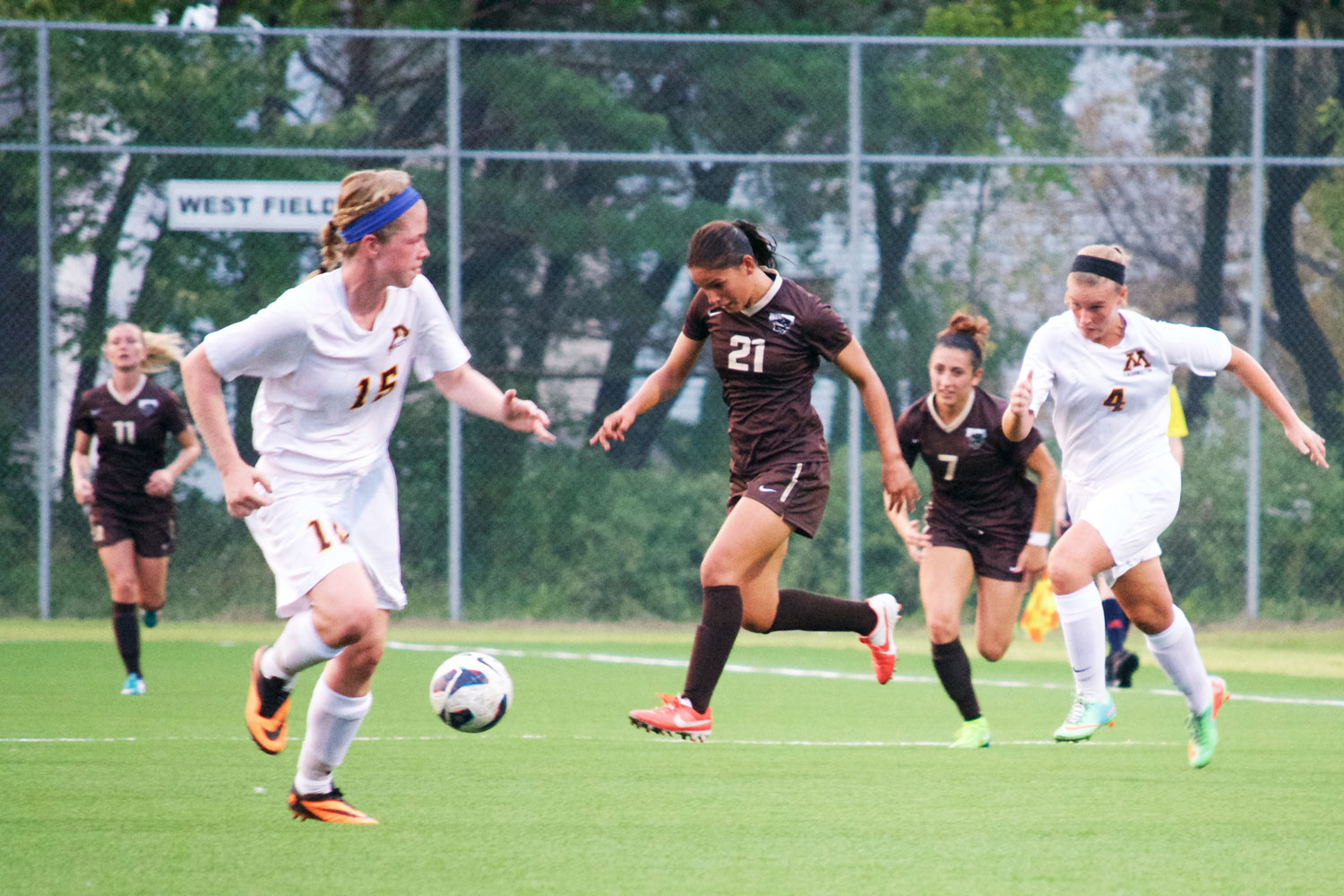 As the CIS soccer season draws nearer, the University of Manitoba Bisons will have a collective goal in mind: to improve on last season.

The team missed the postseason in 2014-15 following a 4-4-4 record in the Canada West Prairie Division. The Bisons have added eight fresh faces to their squad over the off-season, meaning their key players will have to assume more instrumental roles for the 2015-16 campaign. Here is a breakdown of this talented squad’s players to keep an eye on for the upcoming season.

Heading into her final year of CIS eligibility, captain Chloe Werle enters the new season resuming the position of first-choice stopper. Fellow goalkeepers Brittany MacSween and Martina Arran, in their third and fourth years respectively, will push Werle for the number one jersey, something that head coach Vanessa Martinez-Lagunas refers to as a “positive rivalry.”

Last year, the frequent Bisons starter underwent surgery in the offseason, which kept her sidelined for the entirety of the 2014-15 campaign. Having lost a year in her CIS career, Werle will be looking to make up for lost time before hanging up the gloves with the Bisons.

In a 1-0 victory over the Minnesota-Crookston Golden Eagles during their preseason finale last Friday, the Bisons coach fielded all four of her goalkeepers. In the post-match interview, she welcomed competition within the squad.

“They are a team but they also know that they are competing for a spot. Each player makes the other players better and the whole team better,” Martinez-Lagunas said.

Elyce Molyneaux, the Bisons’ most senior defender, enters her fifth year of eligibility. The spirited left-back will also endure more than a fair share of leadership on the backline, as the next two most senior defenders – Kayla Gagliardi and Robyn Coffey – are only in their third season.

Despite her primary defensive role, Molyneaux plays a two-way style that includes the occasional run up the left flank. Possessing such versatility allows her to join to the attack, especially through whipping crosses into the box from wide areas.

Manitoba’s diverse group of midfielders is very well-suited for their style of play: controlling matches with the depths of the midfield area. The collective skill set of players in the middle and out wide makes the Bisons a difficult team to dispossess.

With a very senior-based group at that position, Manitoba also retains a very high soccer IQ in midfield – a crucial element in both their attacking and defending options.

At the base of midfield is Amanda Wong. Primarily a central figure, Wong possesses a dynamic skill set with a precise first touch, a vast range of passing with both feet, and a knack for creativity with the ball.

Capable of performing both a defensive and attacking role, expect for Wong to be used to greater effect in 2015-16. She was also recently handed the honor of being a captain – an incredible feat for being only in her second season.

In a more advanced midfield position, Megan Graca provides the team with creativity in and around the penalty area. A fourth-year playmaker that is very positionally sound, Graca can also handle the duties of handling set pieces.

Confident with the ball at her feet, Selina Speranza is a tricky figure on the flanks. Capable of performing on either side of midfield, the fourth-year winger is quick-footed and fearless when taking on opposing defenders. Speranza also combines creativity with playmaking as she has the vision to deliver crosses from the wide areas with both feet.

As Alyssa Robinson has proven, she is not afraid to have a crack at goal. Her brilliant strike from distance in Manitoba’s final preseason match certainly confirmed her nose for the net. Heading into her final season of eligibility, Robinson will be eyeing the chance to score a few more goals before bowing out of the CIS.

Perhaps the greatest weapon in Martinez-Lagunas’s arsenal is Bruna Mavignier. With a tremendous skill set honed in her native Brazil, the gifted striker is the complete attacking package.

Confident with using both feet and her head, Mavignier impressively led the Bisons with eight goals last season as a freshman. The Bisons coach is expecting more of the same for the upcoming season.

“She’s really unpredictable and has great technique. Last year was her first year and she scored many goals for us,” Martinez-Lagunas said.

“She finished as third-best goal-scorer in Canada West so we hope she gets into the zone again this year and scores many goals for us.”

Aside from her ability to score goals, she possesses an astonishing work rate in dribbling past opponents. On more than one occasion, she has succeeded in leaving two or three of her opposing defenders in the dust on just one run.

Already having shown a lot of promise, Mavignier’s hopes remain high that both she and the Bisons can live up to the hype.

“I have high expectations. I think the team is more mature,” said Mavignier, following her performance against the Golden Eagles on Friday.

“We have more chemistry and have been working really hard so I think we’re going to have a better season than last year.”

As the days count down to opening night, it is evident that the Manitoba Bisons are gearing up for a playoff push. In her third year at the reins, Martinez-Lagunas is gradually turning a squad with youthful exuberance into a talented core who can rival any side in Canada West.

The former Bayern Munich player and German National Team coach has already implemented two objectives over the course of the season. She was very straightforward when asked what she would consider a successful campaign.

“The first goal is to improve our record from last year. We want to do better than last year,” Martinez-Lagunas said.

“The second objective is we want to make it to the playoffs. Last year we were very close to making it. We were fighting for a spot until the last weekend. This year we are really, really excited and we will do our best to achieve those two goals.”

Martinez-Lagunas and the Manitoba Bisons kick off the season hosting the Thompson Rivers Wolfpack on Sept. 4.