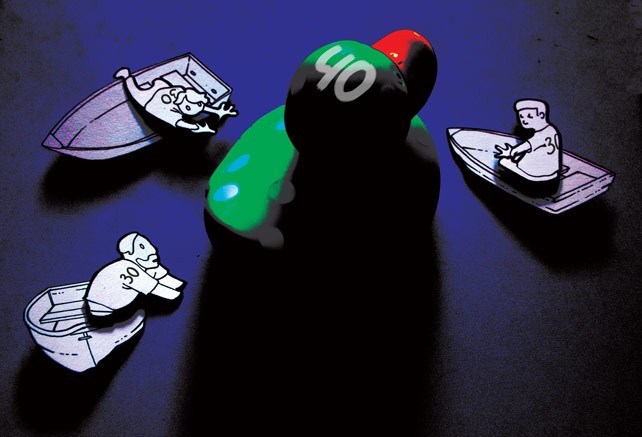 All three major federal parties hovering around thirty per cent support in the polls. Graphic by Bram Keast

The narrative perpetuated by political observers throughout this long election campaign has been that Canadian voters are looking for a change – that the winner on Oct. 19 will be the party that best embodies a shift away from the current Conservative government.

Under this narrative, Canadian voters are casting about looking for an agent of change to hang their hopes on and eventually the “change vote” will coalesce around either the Liberals or the NDP, catapulting that party to victory.

But after the second and last English-only federal leaders’ debate, it is clear that the current dead heat in public opinion polls can be ascribed to the fact that all three parties – the Conservatives, Liberals and NDP – are professional political organizations that could reasonably form a competent government.

They are also each afflicted with flaws severe enough to keep them perpetually hovering around 30 per cent support.

In the case of the Liberals, there is little doubt that Justin Trudeau has almost single-handedly rescued his party from the brink of collapse. Gone are the days of the hapless campaigning of Stéphane Dion or Michael Ignatieff – in Trudeau, the Liberals have found a leader that, regardless of his limited command of the issues, can inspire Canadians with his sunny charisma and Captain Canada persona.

Moreover, Trudeau has re-built the party’s once moribund grassroots organization while recruiting some of the best candidates in key swing ridings across the country – even if assembling “Team Trudeau” required flagrantly breaking his promise to hold open nominations.

The Liberal campaign strategy is also an advantage, depending on how you look at it. By promising to run modest deficits in order to spur economic growth, Trudeau has decided to take a page directly from the campaign playbook of the Ontario Liberals, who managed to squeeze out the NDP by presenting themselves as the only truly progressive option.

When Trudeau’s Liberal campaign volunteers go knocking on doors in Winnipeg, Montreal, Vancouver, or suburban Toronto, they can address questions about potholes and transit delays with real cash on the table – even if the level of spending promised by the Liberals will barely make a dent in the country’s massive infrastructure deficit.

But given recent news of economic growth in June and Department of Finance predictions of a budgetary surplus, Trudeau’s adamant portrayal of widespread economic misery appears overblown and his policy response seems reckless.

As such, NDP leader Thomas Mulcair landed a damaging blow in the debate when he claimed the Trudeau camp was simply “pressing the panic button” in the face of a minor technical recession. Stephen Harper’s consistent refrain that the $10 billion per year in Liberal “stimulus” will morph into a long-term spending binge is equally valid given the terrible fiscal track record of the Ontario Liberals. It doesn’t help that Kathleen Wynne is stumping for Trudeau every chance she gets.

Finally, the Liberal rhetoric, which criticizes Harper’s deficit spending while simultaneously pledging to run more deficits, is incoherent and bolsters criticisms that Trudeau is a policy lightweight.

The NDP has also emerged as a major contender in this election.

Mulcair is reasonable, relatively moderate, and abundantly qualified to be the leader of a G7 country. He has led the New Democrats, in some instances kicking and screaming, into the political centre by promising to run a balanced budget in the first year while pledging to cut small business taxes and retain the Conservatives’ Universal Child Care Benefit.

But his modest fiscal framework simply doesn’t add up to the ambitious agenda he has promised Canadian voters.

A modest corporate tax increase and the closing of a few tax loopholes simply will not pay for a national pharmacare plan, massively increased health transfers to the provinces, a national childcare program, a $15 federal minimum wage, door-to-door mail delivery, the reversal of reforms to Old Age Security and Employment Insurance, a cap and trade system, and a democratic reform agenda that will require divisive and costly constitutional negotiations with the provinces.

In short, an NDP government will either have to run a deficit or it will have to scrap large portions of its policy platform in the name of fiscal discipline.

Finally, Harper still has a message that resonates. Regardless of the myriad ethical criticisms levelled by the Conservatives’ opponents, they are the only party who will not raise taxes on anyone and still maintain a balanced budget while keeping transfers to the provinces relatively stable.

They are the only major federal party that talks about personal responsibility as a key tenet of social policy. In direct contrast with the state-run day care bureaucracy or mandatory increases in Canada Pension Plan contributions offered as solutions by their opponents, the Conservatives would rather encourage families to voluntarily use a tax benefit to pay for private child care provision and a tax-free savings account to voluntarily put money aside for retirement.

The Conservatives keep the nuclear family central to their economic message. Whether by allowing parents to split their income for tax purposes (with a maximum allowable benefit of $2,000) or through the home renovation tax credit, the Conservatives are offering direct investment in families as a key driver for growth.

The Conservative Party is the only federal political party talking explicitly about crime or terrorism in this election – two issues that are top of mind for many voters who are horrified by the stories of crime victims or the images of Islamic State barbarism flashing on their television screens.

They are also the only major party that talks about the limits of accommodation for religious minorities, as exemplified by the fight over wearing the niqab at citizenship ceremonies – all the while celebrating recent economy class immigrants who aspire to live their own version of the Canadian dream.

But despite these advantages, the Conservatives have consistently come across as insensitive to the concerns of everyday people and oblivious to global circumstances.

In particular, Harper has actively avoided talking about the inflated housing market and the imminent risk of an implosion in that sector – his home renovation tax credit could very well make that problem worse.

Furthermore, by increasing the eligibility age for Old Age Security while refusing to increase mandatory contributions to the Canada Pension Plan, he looks insincere on retirement security. And his response to the Syrian refugee crisis has been completely tone deaf and even jingoistic, such as his absurd claim that the Liberals and NDP would open the border to hundreds of thousands of refugees without security clearance or documentation.

For Canadians, especially millennials, who feel insecure about their job prospects, their ability to afford their first home, and to eventually retire with dignity, the Harper Conservatives have given them little to hang their hopes on.

In short, all three parties are competent, professional contenders for power – and they are all terribly flawed. It is going to take a lot more than last week’s debate to jump-start any of these stalled campaigns.