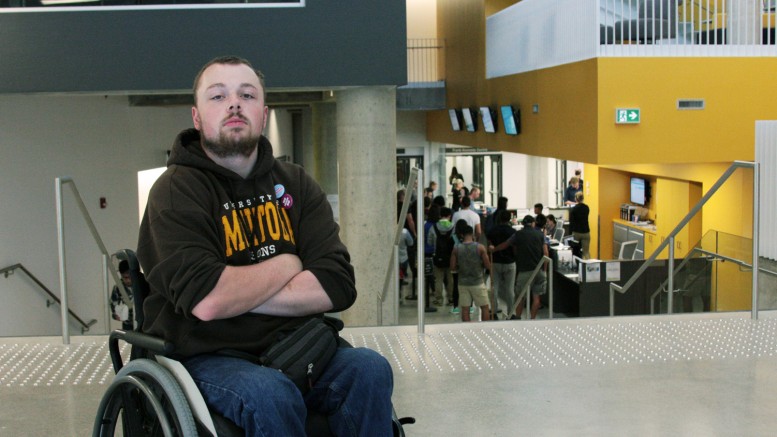 The University of Manitoba’s Active Living Centre, which opened last winter to much fanfare, is leaving a few of the university’s physically disabled students upset over their lack of access to the facilities.

Dating back to nearly a month before the centre’s February 2015 opening, Andrew Fenwick, the students living with disabilities representative for the University of Manitoba Students’ Union (UMSU), said he has been lobbying the university’s administration to make the centre more accessible to all students with disabilities who can take advantage, while offering an opt-out program for quadriplegic students who are completely unable to use the facilities.

A sport and recreation fee tacked onto tuition beginning last winter sees full-time students pay $76.43 per term in exchange for access to all the school’s recreation facilities, including the Active Living Centre, in addition to entrance into all University of Manitoba Bisons home games. Part-time and summer-term students pay $57.32 a term. The fee is charged whether students use the facilities or not.

While Fenwick, who uses a wheelchair when not using braces or crutches, said he can take advantage of much of what the Active Living Centre offers, he doesn’t think students should be made to pay for something they can’t possibly take advantage of.

“They don’t offer opt-outs for students who are quadriplegic – that’s paralyzed from the neck down. That’s insane because those students can’t use the gym at all,” he said.

“So they’re pretty much paying $150 a year for a service that they cannot use.”

The Active Living Centre, a 100,000-square foot, $45-million facility, first opened last winter, replacing the former “Gritty Grotto” gym in the basement of the Frank Kennedy Centre. In addition to higher ceilings and improved lighting, it features several additions to campus facilities, including a 200-metre elevated running track and a 40-foot climbing wall.

Former UMSU vice-president external Christian Pierce, who assisted Fenwick’s efforts last year before moving into the organization’s events coordinator position, agreed there should be an opportunity for students who physically can’t make use of the centre to opt out of the associated fees.

“Realistically, the numbers wouldn’t be huge,” he said. “It’s not like we would be burdening the U of M by adding 10,000 opt-outs or something.”

“I don’t think they should have to pay and I don’t think it would be a large group of people,” Pierce added, noting once his calendar clears he’d like to re-join Fenwick’s push.

John Danakas, the university’s executive director of public affairs, said the fee was made mandatory because it covers more than access to the school’s recreation facilities.

“The decision was made based on the fact that the fees are intended for more than just a gym membership,” he said.

It’s “also for access to Bison sports games, also for the maintenance of sport and recreation spaces and facilities […] and intended for the betterment of the university as a whole, which should benefit individuals as well.”

The school’s website notes the fees will be assessed to all students “excluding those with existing agreements precluding the payment of service fees to the U of M.” Danakas was unable to provide a comment by press time explaining who would be included in this group.

He noted the facility “meets or exceeds the standards for accessible design,” including accessible lockers and the addition of a lift to open-up access to the Joyce Fromson Pool and said the school’s faculty of kinesiology and recreation management, which manages the centre, is committed to on-going discussions to “ensure everyone is treated as fairly as possible.”

“[Kinesiology and recreation management dean Douglas Brown] remains committed to working with students of all abilities to provide access and programming that match their interests,” said Danakas in an email to the Manitoban.

“Many enhancements and improvements have already taken place and more will follow as resources allow.”

The building itself is fairly accessible, said Fenwick – though he pointed to some non-mechanical doors which have yet to be addressed – but he will continue to lobby for more accessible equipment, including outfitting machines with braille and large print for visually impaired students.

“It’s a low number of individuals,” he said, “but that low number is from a minority group that needs that and can only use that equipment.”

“They made it accessible to get to,” he added, “but what I had to explain was that you don’t buy a gym pass to get to the gym, you buy it to use the equipment at the gym.”

U of M to host first ever LGBTTQI* homecoming event