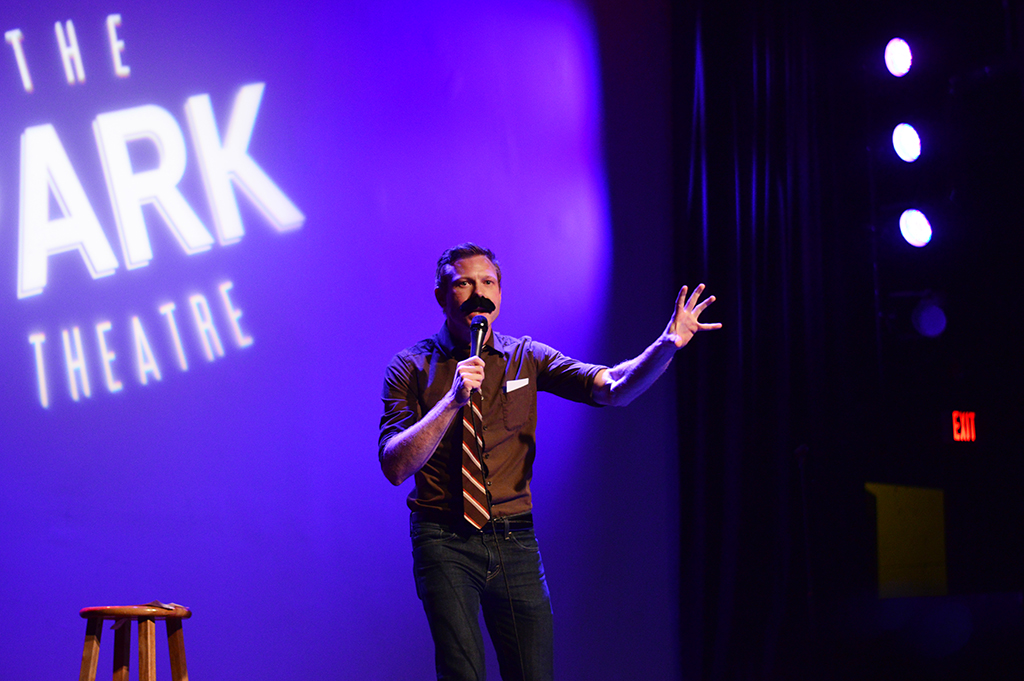 There’s definitely a downside to laughing all night: a sore face the next day. The Winnipeg Comedy Showcase, hosted by Jared Story at the Park Theatre, saw a packed house on July 4. The showcase takes place every three months and features a rotating cast of local stand-up comedians. With a comedy scene as developed as Winnipeg’s, promising the best is no small thing, and Story takes his job of selecting performers seriously.

Writer by day and comic by night, Story scours the city’s open mics and comedy nights for a variety of acts. Saturday’s show offered everything from comics just starting out to those who’ve performed internationally, and still managed to have the crowd laughing consistently.

Comedy nights in Winnipeg take place almost every day of the week. Whether it’s scheduled performers or open mics, the city seems to love watching comedy.

“It wasn’t always like that,” Story said. “I first went on stage eight years ago, and there were some nights happening, but not like this […] People have gotten really good.”

Some Winnipeg comics, like Chantal Morastica, have moved on to continue with comedy in other cities, while others are making a living by performing full time here at home. After seeing Matt Falk close the show, it’s no wonder that we are on the map when it comes to up-and-coming comics.

Falk will be performing as a part of the Homegrown Comics Competition at the Just for Laughs Festival in Montreal, thanks to his inviting stage presence and his creative twist to old stand-ins like impressions and accents. Sometimes sticking to the basics is the best way to go.

Matt Nightingale performed as Lawrence Bleachman, motivational speaker, Honda driver, world class inventor and registered voter. Nightingale says that while some comics are comfortable making jokes off the cuff, he feels most prepared when he’s had time to write out his material.

“Confidence is knowing your lines, in my world,” Nightingale says. And after seeing his act, it’s no surprise – Lawrence Bleachman has a lot to tell his audience, and was a particularly clever act that not only made people laugh but actually imparted some motivation. By the end of his set, the audience had memorized the six steps of success, most notably “spot the need!”

Story doesn’t reserve spots in his show for only those that have been performing for years or as professionals. Florence Spence was scouted by Story at a few open mic nights.

“She’s starting to come into her own unique voice,” Story says. “It’s her biggest show yet, and I’m hoping it’s the start of many more for her.”

Spence spoke openly about her experiences as a mother, and a member of the Aboriginal community with a candidness that had some people squirming in their seats – it’s not often one gets to joke about racism and drug abuse so close to home, though perhaps we should be more comfortable with humor as an outlet.

Story said having a full house of attentive guests is exciting, but it doesn’t stop him from being nervous every time he goes on stage.

“I’m more nervous before I go on stage, then I’m just a wreck,” Story laughs. “But then it’s like, I guess I’m doing this […] I think people like comedians who aren’t the most confident. No one likes a person who’s full of themselves. It’s about being able to poke fun at yourself and everything around you.”

Nightingale echoes the sentiment that being nervous isn’t a bad thing. In fact, it means you’re doing something right. For those who are nervous, but remain committed to comedy Nightingale has one piece of advice.

“You just gotta go out there.”

Follow Story on Twitter @jrockarolla to keep updated on the next showcase and other events around the city.

A fresh take on a timeless classic