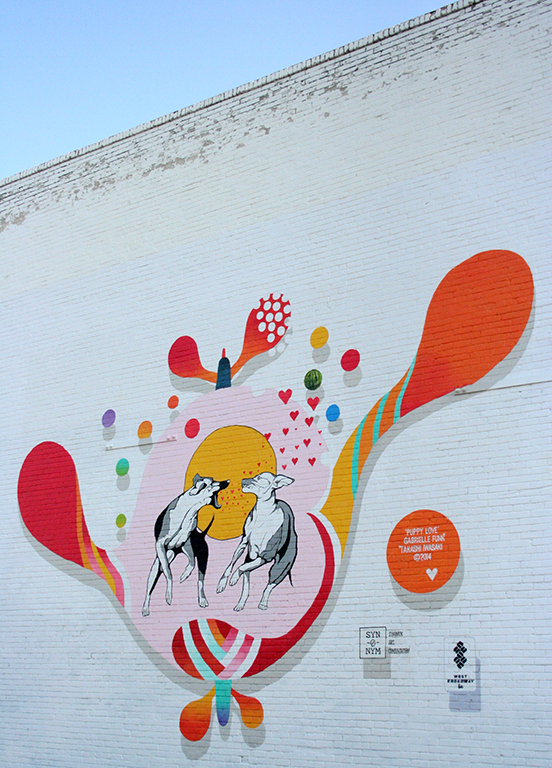 Since its humble beginnings as graffiti plastered illegally on subway cars, public art has flourished from a nuisance into a means of community revitalization, and right at the centre of the movement in Winnipeg are Chloe Chafe and Andrew Eastman of Synonym Art Consultation and founders of the Wall-to-Wall Mural and Culture Festival – an annual, multifaceted five-day festival in Winnipeg designed to make art more accessible by creating both interior and exterior murals, and pairing each mural unveiling with a public culture event.

“There’s an automatic thought that public art is spray paint, which is vandalism, which is destruction of our community. What we’re trying to do is bring contemporary, beautiful works of art onto walls that you would drive by everyday,” said Eastman.

Public art removes the potentially pompous facade of fine art and breaks down the fusty gallery walls. It creates an environment in which art is not only for the elite; it is for everyone.

“Beyond that, street art right now is such an international movement that it instantly connects cities and communities, as opposed to just connecting the art community within your city, it’s connecting you to an art movement that is going on around the world right now.”

As the movement continues to gain momentum, public art festivals are starting to emerge all around the world, including MURAL Festival by LNDMRK in Montreal, from which Chafe and Eastman just returned. For each of its three years, the festival has commissioned both international and local artists to create a total of 50 full-scale murals down Boulevard Saint-Laurent, to show films, and to partner with local vendors. This year, 24 murals were created during the 11-day festival, completely shutting down one of Montreal’s major streets to make way for over one million patrons.

“It’s so amazing to see the different strings of people that benefit from [MURAL Festival]. There’s the obvious art community and street art community, but there are also all these businesses that are financially benefitting from it; they get over a million patrons walking up and down the street, experiencing the art, and going to these shows. It’s unbelievable to be able to reach such a broad audience – it’s really inspiring,” said Chafe.

The prodigious structure of the Montreal festival, while not necessarily directly transferable to Winnipeg, illustrates the numerous benefits of public art, as well as the potential of the movement.

“It was really amazing to let our imaginations run wild and just be overloaded with sensory input from the festival, but then we had to bring it back down and think about how Winnipeg could be a unique player in this international street art scene. We started to think more about how we could develop the community from a grassroots level here, as opposed to just hiring a bunch of international artists to come in and plaster all of our walls [for the Wall-to-Wall Festival]. It would be amazing, but it’s not really feasible,” said Eastman.

“I think for us to do the exact same model, and bring in 10 international artists and 10 national artists, for our type of community, wouldn’t necessarily have the same benefits,” added Chafe.

At this point, it makes more sense for us to establish a strong foundation from which to build. To import a handful of international artists, while it would result in amazing work, would not have the same long-lasting benefits as it does in Montreal.

“We need to continue to promote the awareness of what we’re doing and we need to promote the viability of the street art movement. In Montreal, that already exists. For them to be able to create 20 large-scale murals in 11 days is possible, and it’s possible for 10 blocks of a main street in Montreal to be closed down for this festival. The businesses understand it and the people understand it. We need to get Winnipeg onboard with this,” explained Eastman.

“We need to get people excited about street art and about beautifying our city and excited about growing our community from the ground up. Let’s all get on the same page because it’s so beneficial for everyone.”

Winnipeg, in fact, is in an optimal position to join the movement. We have the talent, we are developing the awareness, and we get to choose what kind of player we want to be in the scene and use it to facilitate community growth.

“That’s both the amazing thing about Winnipeg and also the somewhat terrifying thing. A lot of us are starting these different ideas or movements basically from the ground up. There is a street art community in Winnipeg, absolutely, but the scale of it is a lot smaller […] We’re trying to make a really strong foundation so that we can move up,” said Chafe.

“Art education has always been a big element for us; it’s never just about the party or just about the art. We want people to understand all of the benefits art will bring.”