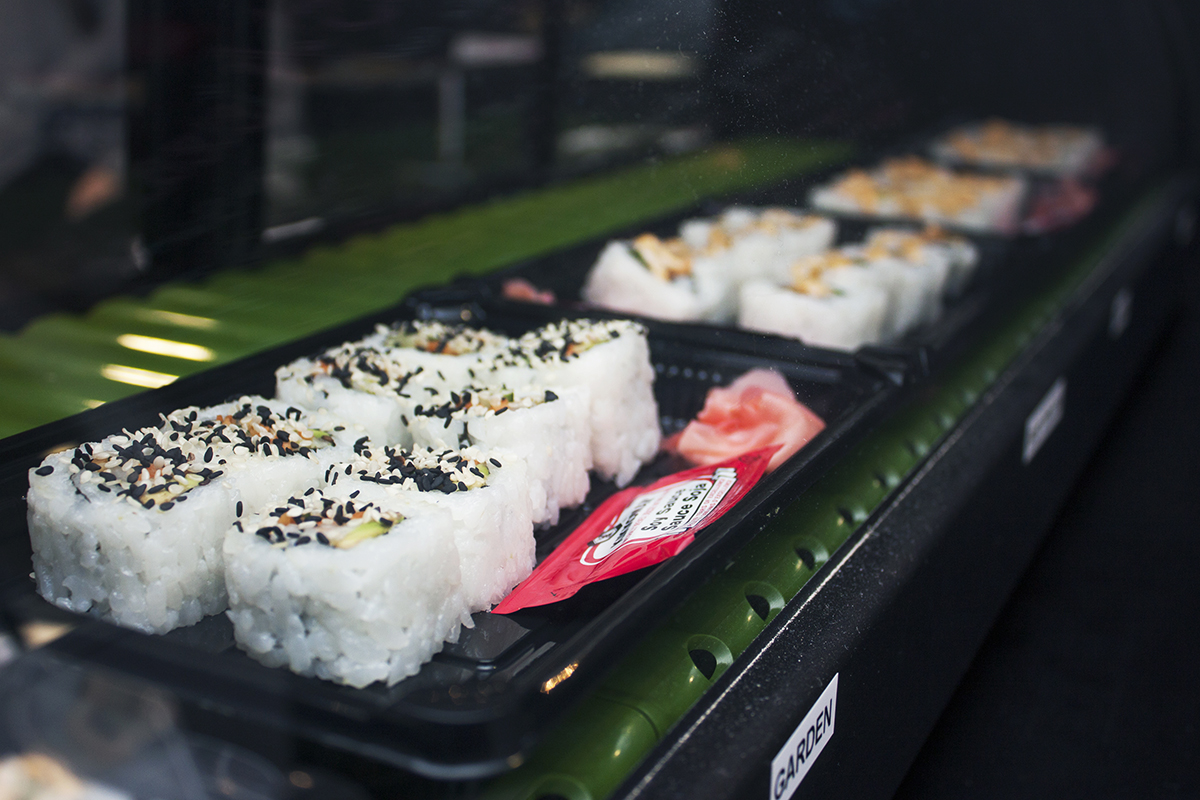 The University of Manitoba Students’ Union (UMSU) held the grand opening for UMSUshi last week, a new take-out restaurant run by the students’ union on the third floor of University Centre.

The sushi restaurant is taking the place of Global Bubble Tea, which had been leasing the space inside I.Q.’s Cafe and Billiards from UMSU for several years. The University of Manitoba Students’ Union terminated their lease with Global Bubble Tea in order to make room for the new business.

The Refresh slate—which won last year’s UMSU election—featured UMSUshi as a cornerstone of their policy platform.

Jeremiah Kopp, UMSU vice-president internal, first reported the executive’s plans for UMSUshi to UMSU Council at their July 21 meeting as part of his officer’s report. The new business was proposed as part of a larger redesign plan for University Centre’s third floor, titled “UMSU Street.”

The full renovation included removing the wall at the entrance to I.Q.’s, a mural along the hallway near the entrance to the Hub and the UMFM radio station, small dining tables being added in the hallway, signage bearing the UMSU Street name, and renovations to Degrees and the Hub.

“We wanted to personalize the third floor, make it a hub for students – no pun intended [ . . . ] this isn’t administration, this isn’t faculty, it’s not staff; it’s you. It’s run by students, for students,” said Al Turnbull, UMSU president.

Turnbull told the Manitoban that, due to the close proximity of Degrees’ kitchen and the relatively easy preparation steps for sushi, they have not had to hire new kitchen staff. UMSUshi is currently run by select staff and management from Degrees.

Food and beverage manager Thomas Blumer will be overseeing the operation of UMSUshi, in addition to his managerial roles with the Hub and Degrees.

Blumer told the Manitoban that the sushi will be made with cooked fish prepared fresh every day.

Blumer did not rule out the preparation of raw sushi rolls, but said the introduction of raw fish will be contingent on how the business fares in the coming months. For now, most rolls will be prepared with either smoked salmon or cooked tuna.

UMSUshi is a “grab and go” take-out establishment, as opposed to a sit-down restaurant like Degrees or the Hub.

“Sushi restaurants are really saturated in Winnipeg, I feel, and we didn’t want to just cookie-cutter a [restaurant]; we wanted to have something that made sense for students here,” Turnbull said.

“If you want a couple rolls of sushi and you want them quick, fresh, and at an affordable rate, then you can come to UMSUshi [ . . . ] I think that’s the model students want.” Turnbull sees the opening of UMSUshi as another step towards the completion of UMSU Street and the fulfillment of promises in last year’s campaign platform.

“UMSUshi was a campaign promise, and we don’t throw those out lightly.”