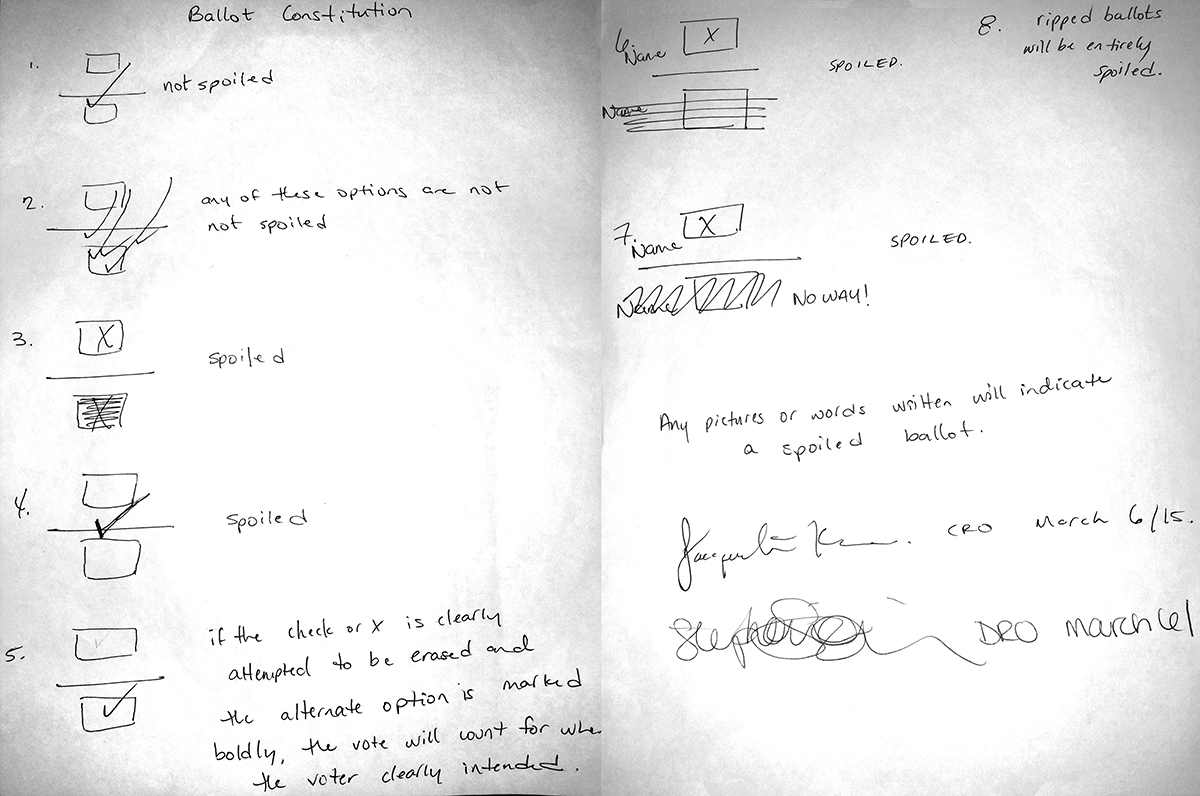 The chief returning officer of the University of Manitoba Students’ Union (UMSU) 2015 General Election assured the Manitoban last week that there were no irregularities in the vote-counting procedure after several questions were raised after late night vote recounts produced a close result.

This year’s UMSU election saw every executive member elected by a small margin, with no winning candidate surpassing 56 per cent of the vote. The result of the election was a mixed executive slate of four executives from Your UMSU and one from Clear Slate, with Zach Leclerc beating out Your UMSU’s Christopher Bélanger for vice-president internal by just over 200 votes.

Information was leaked to the Manitoban earlier in the night that a mixed slate was likely. The final results of the election were not determined until approximately 4 a.m. following a rigorous recounting and scrutineering process.

The University of Manitoba Students’ Union bylaws state that scrutineers—individuals selected by each slate to observe the ballot counting process—are not permitted to leave the counting room until all ballots have been counted or they have received express permission from the CRO to do so.

Turnbull, who was seen entering and exiting UMSU Council chambers during the ballot count, said that he did so at the request of Keena. Turnbull was a scrutineer for students living with disabilities candidate Andrew Fenwick.

However, Turnbull told the Manitoban that he was permitted to enter and exit due to his participation in the process as a liaison, not a scrutineer.

“The person I was scrutineering for was no longer in consideration, but I had already been in the room so I decided to act as an UMSU liaison to Jacqueline to help her get supplies. I went and printed the affidavits and also helped her write the affidavits for the poll clerks, the ballot counters, and scrutineers,” Turnbull said.

“Then I went and got sharpies, got people coffee, did that kind of stuff. I never once scrutinized a ballot or looked at a ballot on the second count.”

There were other individuals seen entering and exiting the council chambers, but Turnbull attributed this to a few modifications in personnel between the initial count and recount of the ballots.

“When we were doing the recount, we realized there may have been a flaw with how many ballot counters there were in proportion to our scrutineers. We added two more scrutineers on each side. We eliminated more than half of the ballot counters and had it so that every single ballot was scrutinized,” he said.

The Manitoban observed on election night that several candidates seemed to have access to information about the vote counting process throughout the evening.

Keena told the Manitoban that she did not observe any leak of detailed information from the count room.

“In terms of telling people what was happening or how it was going, the only things that were relayed to candidates were through scrutineers that were in the room and all that they were told was, ‘it’s close and we’re doing a recount.’ They were certainly asking for more information, but we just didn’t have anything concrete to tell them,” she said.

The only potential source of specific information for candidates and others present outside UMSU Council chambers during the election was identified by Turnbull as 10 ballot counters that were sent home immediately following the election’s first count.

Turnbull told the Manitoban that he did not know this with absolute certainty, but did confirm that the 10 ballot counters did not sign anything like a nondisclosure agreement prior to leaving the room, so they could have been free to speak about the initial results.

“It would have been impossible for anyone to speculate who was going to win during the recount, but the room knew the numbers and then half of them were let go. Right away, I knew that was an issue,” he said.

One of the Your UMSU slate’s appointed scrutineers told the Manitoban that several inflammatory ballots had been discovered during the count – many bearing messages to the effect of “Fuck you Bélanger.” This message is presumed to be in reference to Bélanger’s controversial Twitter and Instagram posts where he made derogatory statements about women. The posts, which were mainly from 2012 and 2013, were unearthed during the election campaign and reported by CBC News and an anonymous blog.

However, the inflammatory statements written on the ballots may not have resulted in the ballots being discounted.

The University of Manitoba Students’ Union ballot counting bylaws state that a ballot shall be considered valid if it “indicates clear voter preference for one of the options on the ballot.”

Keena declined to comment on whether the ballots in question were rejected or not, adding she does not want to “encourage students to try and do something unique to their ballots to have it talked about in the future.”

Keena stated she did not consider the alleged “Fuck you” ballots to be representative of an orchestrated effort.

“The instance of those ballots was so slim that I can’t imagine there was any sort of pattern or reasoning behind it [ . . . ] it was a very small number, to the point where I didn’t really think that was much of a trend during the actual ballot count.”

Keena also assured the Manitoban that she had specific documentation prepared to guide her rulings on spoiled ballots in general.

“I have a ballot constitution that was created before the recount and it just outlines a variety of different examples of ballots that could be contentious and whether or not they are spoiled,” she said.

“In a lot of incidences it’s an ‘x’ on one, a check on another, and one of them is scribbled or partially erased. Each scrutineer is able to make a good case for why it should be counted for their candidate, but I don’t want to make assumptions about what the voter was trying to do.”

The handwritten ballot constitution, written and enacted on March 6 of this year, was provided to the Manitoban by the CRO, clearly stating that “any pictures or words written will indicate a spoiled ballot.”